Perhaps a few times you've met a soul in fur and paws who draws you close with tractor beams right off -- but you don't often get to take her home. I am writing to tell you about a dog my husband Sandy and I saw at the Humane Society of Boulder Valley who caught our eye with her great beauty and mind-her-own-business manner, who impressed us by burying the treats we gave her, and then fully captured us by leaning back hard into the car seat on the drive home like she already knew our car, and us -- and what took you so long anyway. 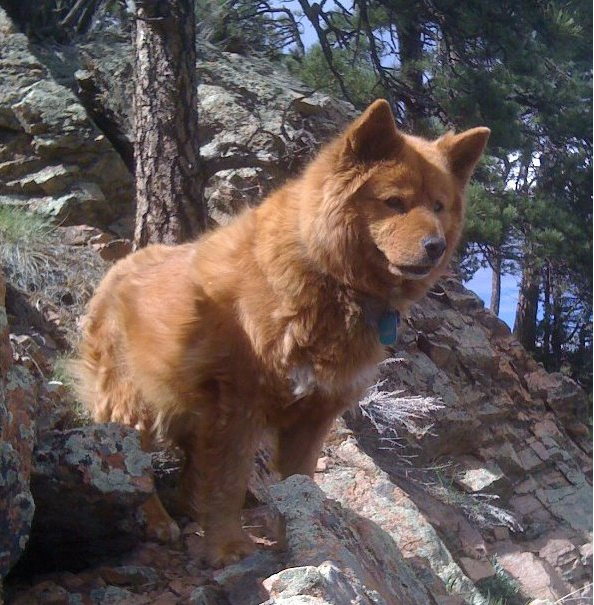 She'd been on display only half a day when we claimed her. Lucky us. And that day we retired the funky question of whether to have a baby or get a dog. We got the dog. And for 10 years the dog completely had us.

Just this spring Miss Maitai Puppy, age 12, finished a glorious 10-year ride with us. She left a cashmere-soft, black eye-linered hole in our hearts. This girl -- whom we named Maitai after our neighbor's Chow named Leitai -- was a being of many depths and we enjoyed years of teasing out her story and building up her spirits. And in turn she built us up too. Here's a smidge of the memories of her sweetness, intelligence, leadership qualities and love of life from the Rockies to the Coast of Maine:

Maitai came to us a reserved and serious pup who'd been a stray in Denver and had had a litter already, so she seemed anxious with longing around puppies we met on the hiking trail. It seemed to help her to lighten up and become a social animal that we named her for an intoxicating drink. Hikers would often laugh and wrinkle their nose saying, "Maii Taiiii" like it captured some magic quality about her, and she would smile and seemed to understand the world of humans could be a big party where she was popular and every person brought affection. Even better if they had a dog. Better yet, a puppy.

She had a head so soft and fluffy that her gruff professional dog trainer, John Hendershot, who'd just explained to me that dogs should not get affection without first doing something to earn it, walked right up behind Maitai and ruffled her fluffy head. Could not resist. Just for the pleasure. In time it seemed that Maitai heard the phrase "she's so soft" as often as her own name. Likewise she seemed to understand she had a great effect on people -- and maybe feeling peoples' excitement at the softness of her fur was the start of that.

An unusually mellow yet outgoing dog (unlike most Chows) she seemed to "get it" and fit in to social situations, so she was often invited to join us to parties at friends' homes. No matter how many people hugged her (and dogs don't like to be hugged) she took it well and smiled. She was concerned around children (who rightly saw her as a living golden teddy bear), but Maitai never bit anyone (or so much as growled) in 10 years we lived with her.

Dog experts often say that a dog needs a job. Maitai showed us beyond a shadow of a doubt that her job was greeter plus guardian of home and heart. She loved the long lines to the postal window or the pharmacy where she visited people, leaving a trail of easy moods in her wake. (Boulder is so dog friendly a town that even pharmacies allow dogs, which is part of how great dogs like Maitai get created.) She aced the training to become a therapy dog with Boulder Community Hospital where she served for a couple of years (her tricks were Come, Say Hi, Rollover, Paws Up, Kisses, Shake Your Tail and Crisscross). She also greeted traumatized dogs with affection and soft alpha confidence, teaching them how to play, and getting big kisses from these dogs at later times.

Her love included protection of others such as the family cat, done by simply walking between Mr. Winslow and strange dogs who'd came to the house. This she also did -- even with a leg weakened by surgery -- for her good friend Mostly, on the beach in Maine. She didn't snarl or curl her lip; she just exuded mellow alpha style by barking and running herd between Mostly and the rest, and that was all that was needed. Kinda like when she put two paws up on my chest to keep me from approaching two deer in my garden. 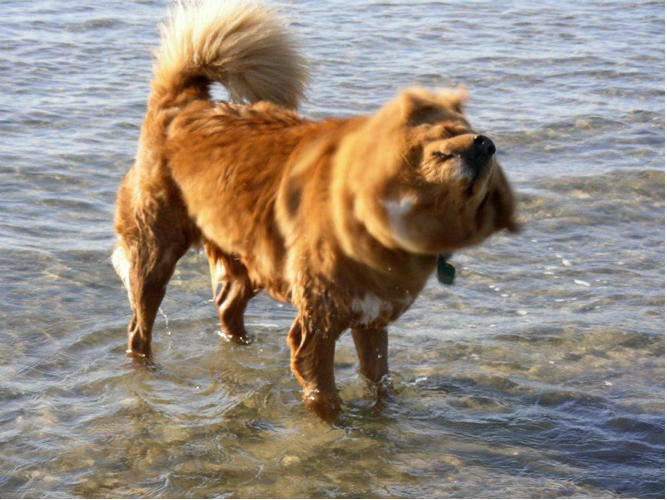 Her high social intelligence led her to invent a mode of communication -- shaking her head and collar to get attention. This meant variously: Yes Please! Hi! Pay Attention! and Over Here! So charismatic was her leadership that her two best friends in the 'hood, Windy and Dancer, and even the cat Mr. Winslow, copied the gesture. One of dozens of things I'll miss so much is her head shake when I just wake in the morning or when I slightly whisper to her, "Wanna a ride in the car?"

Part of her drive to protect was to rid our property (as well as the neighbors' properties) of vermin. Her hunting skill was awesome and she was a determined murderer of ground hogs and pack rats. It's true that she never bit anyone -- save for one Terrier named Tee who looked like a ground-hog one day at our property in Maine and Maitai rudely abused him until a quick thinking landscaper saved Tee's life. After our furious scoldings, Maitai seemed to cry with water welling up in her eyes. Later, on the eve of the day for surgery to remove one eye gone bad from glaucoma, Maitai and I took a long walk on the snow-covered Sanitas Valley. She alerted at something in the distance, and after a moment lit out like a rifle shot. From behind her I could faintly see a black fox, maybe two hundred yards away. She did this with one eye blind from glaucoma causing migraine-caliber pain. Her vision in her remaining eye remained fine for three more years. She sat routinely at the front stoop watching for fox, squirrels, ground hogs, visitors, hikers with their dogs, UPS trucks. And on the day she saw a mountain lion up the driveway she was already lame but immediately chased off that lion by barking and dragging her hind quarters up the hill -- with me screaming and running behind her. That lion was gone.

Her prey drive made her the butt of jokes when it came to foxes. From her stoop she would spy the rock ridge for hours and when Mr. Fox traversed the scene, she lit out on rocket fuel (I suspected those starts for making her need three knee surgeries.) After she'd woofed the fox out of sight, she'd return to her land peeing and strutting, and then she would saunter to the front patio, bristling with indignant pride. Meanwhile a small disc of a fox face rose over the edge of the property, and carefully Mr. Fox would tiptoe onto Maitai's pee spots and squat on each one looking right at Maitai. When Maitai turned and caught sight of this she went ballistic and with triple speed she lit off woofing again, and you could hear Mr. Fox laughing all the way up and past the ridge.

In the deeper personal realm Maitai was our Foo Dog -- the spirit in ancient Asian art and lore who guarded temples and official buildings from harmful spirits and trouble makers. Maitai played foo dog most mysteriously by sitting worshipfully before one family member -- a cat lover who ignored dogs but who was spiritual and honest -- and later she later barked at length at an in-law who caused the family much pain by lying a great deal in a divorce. Did she know?

She was the guard of my heart, taking notice whenever I swore, even under my breath, by giving me a sharp look; sometimes she would get up and hobble across the room to me and say with a nuzzle, "Chill out mom." 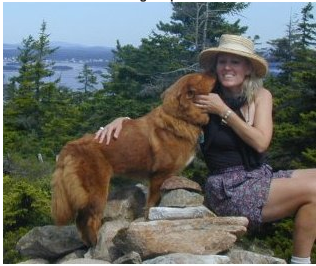 She had three lives within the 10 years she spent with us. Her young years, flawless in body and beauty and running spirit. Her middle years -- hospital dog with increasing social profile and loads of surgeries and recoveries. Then her closing years -- with arthritis in her back eventually closing down her ability to walk without help. She was so patient through all the care and rehab, a gracious and delightful partner as I helped her to walk and climb stairs and pee, a lover who pressed her face into my palm when I gave her her eye drops. And what a sport -- who gallantly embraced three swim appointments per week at 30 minutes each -- try to get a Chow to do that.

Her closeness to her humans never faltered. She seemed to know when the time was coming for her end, not only because her boredom from sitting around all the time but also because of the loss of her furry glory in her pantaloons and halo-tail, lost to her skin ailments from sitting so much. We had the great luck of having the guidance of two dear friends -- Elena (a talented psychic) and Cathy (a geriatric nurse) -- say clearly to me that Maitai was "ready." She grew closer to us as she felt the end gathering and Sandy and I made rituals to appreciate her such as wine and cheese each evening (I'd have the wine, she would have the cheese). On her last day, to each of us, Sandy, me, and our neighbors Dave and Elena, she gave personalized goodbyes. To me she gave long heartfelt stares with loving eyes. That day she fully stopped walking, that day she died.

By staying with me to the end, never getting lost or hit by a car or hauled off and killed by a lion, she gave me a unique gift that was unprecedented in my life with beloved pets -- it was the ability to plan for her death and to make sure it was OK, even good, by being together to the end. For the first time, loss of a pet was not traumatic. It was gentle and kind and all the goodbyes got to be said. That's a great thing I want to take away from this loss of PuppyBaby -- the ability to see death as something natural and decent. I expect she's calm and OK right now. And she helped me to feel I could prepare for death in the future also, something to be calm and OK about. 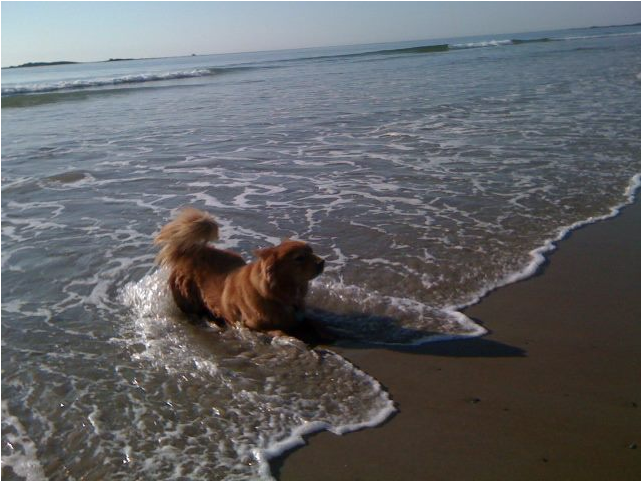 Maitai Puppy is remembered by Anne, Sandy and Toby Butterfield plus Elena and David Johnston, plus Cathy Fahey and Sally Anderson.

In Maine, she is remembered by the kith and kin of the Back O' Beyond, the Bungalow, the Beehive plus the Whole Dog O'Clock gang on the beach at Prouts Neck.

And her caregivers: Kathe and Susie at her swim club called Back on Track, plus her vets Alan, Ed, Craig and Claire at Boulder Vet Hospital , plus Tammy Wolfe at the K9 Body Shop, her knee surgeon Kevin McAbee , her ophthalmologist Matt Chavkin ~ all of whom gave Maitai such tender and supportive care.