The ad, for dating service EstablishedMen.com, appears in the magazine's Spring/Summer issue, which features Courteney Cox on its cover. It features two lingerie-clad women; a penis-shaped shadow appears over the chest of one of the women.

See the ad below (circle and arrow added by FoxNews.com, not in the original ad): 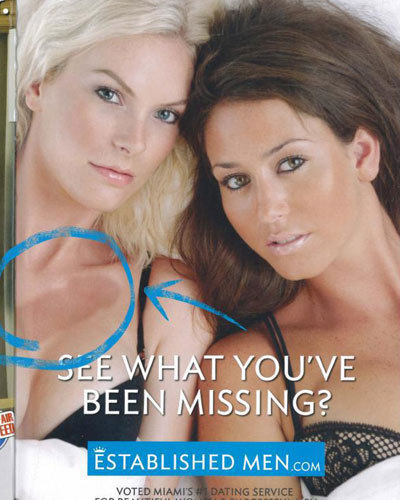 "Did they not see this, or have magazines become so desperate for ad space that they'll 'overlook' something like this?" media and publishing expert Penny C. Sansevieri asked FoxNews.com. "But I find that every time something like this happens it elevates the exposure, good or bad - and issues will get snapped up very quickly."

A rep for the dating site told FoxNews.com that they never expected the ad to be approved.

"When we created the ad, we never imagined a magazine like Miami Living would approve it, but judging by the amount of sign-ups we received since the magazine has come out, this 'shadow penis' ad seems to work and might become a staple of our campaign," the rep said. "This ad is definitely a true reflection of what EstablishedMen.com is all about - connecting professional men with beautiful women for mutually beneficial relationships. And knowing that Courteney Cox was going to be on the cover was a big incentive for us."

UPDATE: The magazine has apologized for running the penis shadow ad. In a statement to Fox News, editor-in-chief Vanessa Pascale said:

"This was just now brought to our attention. Miami Living magazine would like to apologise for not noticing the image. We hope that our audience recognises that we were just as surprised as they were to find this out. I myself have looked over the magazine dozens of times [prior to this being brought to my attention] and did not detect anything hidden in the ad, which leads me to believe that establishedmen.com must have tipped someone off as a publicity stunt. We trusted them as an advertiser. Miami Living magazine intends to review future ads more carefully so that something like this does not happen again."