Two kayakers in Bonita Springs came across what they thought was a dead manatee Tuesday night. But as they approached the belly-up creature, they realized it was still breathing.

The manatee had been poisoned by red tide, a toxic marine algae that blooms occasionally in the Atlantic and more often on the Gulf Coast.

"The manatee has to ingest or inhale the red tide toxin," Baker continued. "It is not absorbed through the skin. Ingestion is more prevalent than inhalation. It occurs when vegetation the manatee feeds on is exposed to red tide."

The manatee was transported to the Miami Seaquarium, where its caretakers report that it's making a good recovery and should be released within a few weeks.

According to NBC Miami, the 900-pound sea cow was named Breve after the scientific name for red tide, karenia brevis.

Veterinarian Dr. Maya Rodriguez said the manatee was unresponsive when she first arrived but is improving. "We gave her antihistamines, anti-inflammatories, antibodies and she's responded really really well," she told NBC Miami.

Although they originally thought Breve was too stiff to remain buoyant, it turns out that the manatee didn't need to wear a life jacket as some victims of red tide do.

Cristina Rodriguez of the Miami Seaquarium told HuffPost Miami, "Once they got her in deeper water, she responded really well."

In a nearby Seaquarium tank, two sea turtles are also recovering from red tide after boaters found them in Biscayne Bay five days ago, according the above NBC Miami report.

The Seaquarium reports that veterinarians were able to flush out their systems and the sea turtles might be able to return to the wild as soon as Friday.

The FWC's Red Tide Manatee Morality report indicates that 18 manatee carcasses tested positive for red tide poisoning in 2011 and 5 others were suspected of such toxicity. The majority of these manatee deaths from red tide were found in Lee County.

The FWC is very grateful to the two kayakers who stayed with the suffering manatee and diverted boat traffic until help arrived. "You gave him a fighting chance. This is huge," said FWC biologist Kati Therriault. 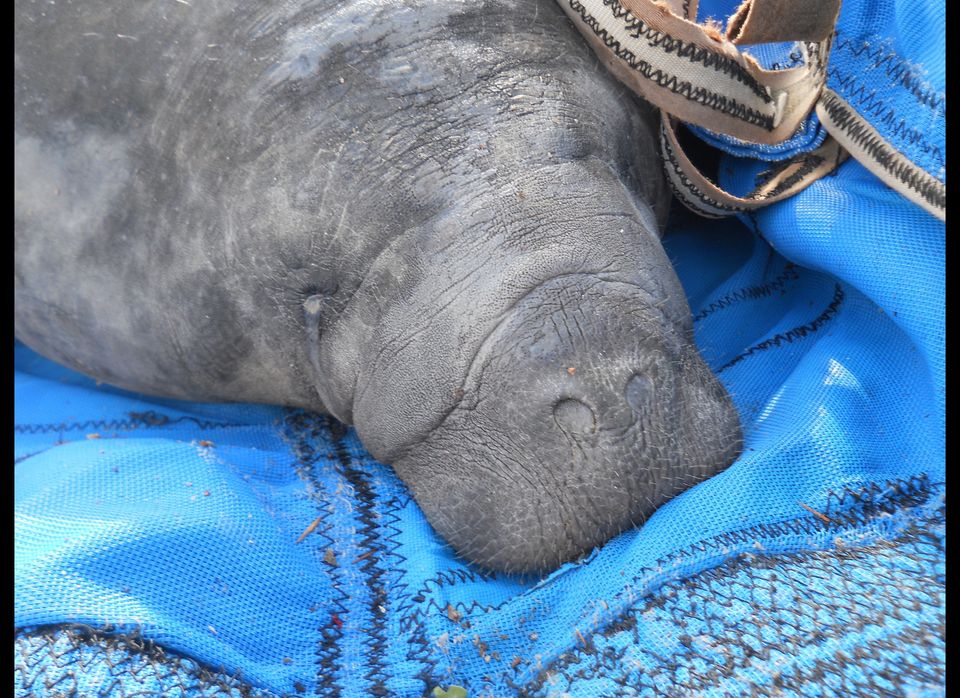