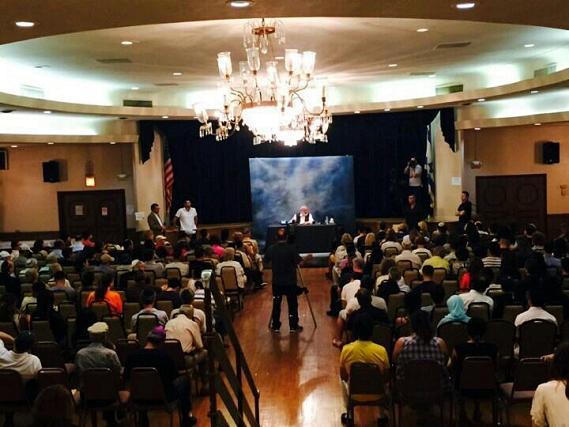 Last night, I gave a lecture at the Rego Park Jewish Center in Queens, New York. The topic was "What makes people single out Jews, and what can counter anti-Semitism's sharp rise." Admittedly, I was not very hopeful. I had given many lectures in the US concerning anti-Semitism, the last of which was as recently as last November in D.C.

But this time I was pleasantly surprised. First, we had a full house of 300 attentive people in the audience. Second, and more important, judging by people's questions and responses to the message, it seems that something is changing for the better.

As always, the message was that Jews are essentially a spiritual entity and not a group comprised of genetic kinship, and that our role is to bring about brotherly love by implementing it among us and by so doing setting an example of unity to the world. However, this time the predominantly Jewish audience seemed to welcome the idea that it is the moral responsibility of Jews to cultivate mutual responsibility and love in order to set an example to the world.

Even the notion that because we are delayed in carrying out this role, the nations' anger toward us is expressed in what we define as anti-Semitism went down well. That is, people did ask about it, but the questions were more about the implementation of the task than an expression of dissent toward the notion of Jewish responsibility toward the world.

On a previous visit to New York about two years ago, I gave another lecture, in Manhattan, on the same topic. Following it an elderly Jewish man approached me quite aggressively. This time, the predominant reaction was factual, practical questions. I think this is a very good sign. If we pursue this direction, there will be no anti-Semitism because there will be no reason for it.

I wish that I could take more credit for the positive change in people's perceptions, but I'm afraid that the prime "culprit" in this shift is anti-Semitism itself. The more it grows, the more willing we become to unite. And the more we wait for the world to push us toward unity, the heavier the price we'll have to pay for it. On the other hand, if we choose to unite before we are prodded into it, there will be no reason for the prodding and the anger toward us will evaporate like morning mist.

There is clearly much more work to do, but the first step toward any transformation begins with awareness, and I think that a shift in our awareness is already happening. If this lecture says anything about the future of Jews in America then I think that it is certainly a step in the right direction.