How do you say "WTF" in French?

A sinkhole opened up in downtown Montreal at around 9 a.m. local time Monday. Measuring about 26 feet long and 16 feet wide, the cavernous maw partially swallowed a backhoe at the intersection of Guy and St.-Catherine Streets.

Borough spokeswoman Emilie Miskdjian told the Canadian Broadcasting Company that the hole opened as city work crews started working on a suspected sewer pipe leak that had occurred over the weekend. 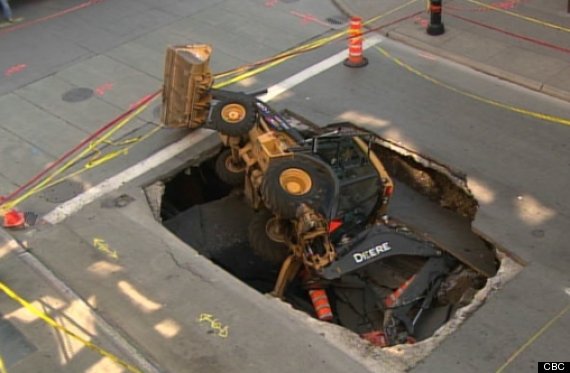 Business owners in the Ville Marie neighborhood of Montreal told the CBC that the sewer problem had gone unaddressed by the city for at least a week.

"It was pouring in the wall and coming down in the whole street and it smells and all this nonsense — you cannot imagine," Rahman Ismaili, who owns a nearby pool hall, told the station.

While it might not be as bad as the deadly sinkhole that swallowed a man in Florida earlier this year, there's no doubt that this sewage-sparked sinkhole really stinks. At least it didn't fill up with a questionable-looking mess.