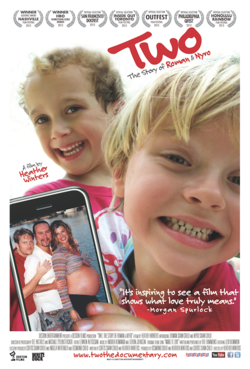 TWO: The Story of Roman and Nyro is the documentary film that my husband, Desmond Child, our surrogate and friend, Angela Whittaker, and I made telling the story of how we became a family. Like the recent Golden Globe-winning movie Boyhood, TWO was filmed over the course of 12 years, documenting our twin sons Roman and Nyro's lives from embryos to wiseguys, and has screened at 17 film festivals across the United States and beyond over the last two years. We've been fortunate to win Audience Favorite awards at mainstream festivals in Nashville, Palm Springs and Los Angeles, and everywhere we've been, from Havana, Cuba, to Honolulu, our message has resonated the universal power and ultimate triumph of love, and the message that it is love that makes a family. 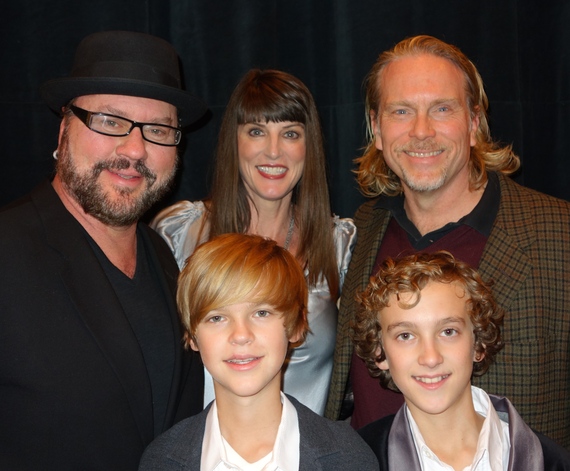 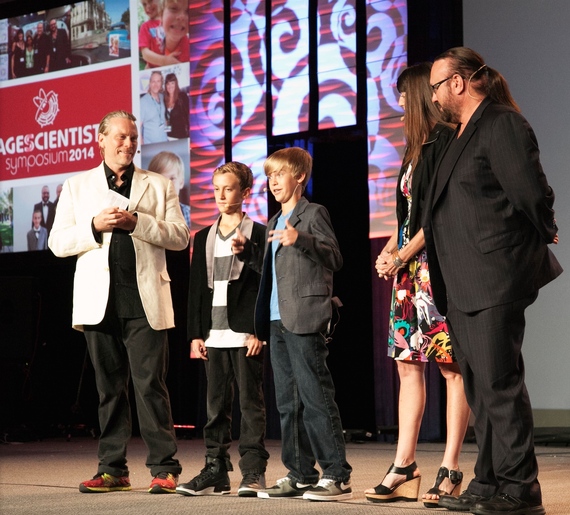 Since the film has become available on Netflix, Amazon and iTunes, it feels that we're touching more and more folks with our tiny tale of how the universe conspired to bring our boys into the world, because every day, one by two by three, we're all seeing our numbers rise on social-media sites, and we've been receiving messages from new friends who have been moved by our multi-generational story. The whole process of making the film with our director, Heather Winters, and sharing it with the world has been amazing and personally empowering for all of us involved. It has been profound for me to stand alongside my 82-year-old mother, Mary Ann Shaw, and field questions and comments following screenings as those in the audience reflect on her story of growing up as the eldest daughter of 11 children in a fundamentalist Christian home. After learning that I was gay 26 years ago, my mother allowed herself to ask hard questions, looking inward and outward with the depth of a religious scholar into matters of mind, heart and spirit, and has become an inspiring advocate for equality and tolerance within her church, community and our extended family. My mother's participation in the film, by sharing her life journey, is the tender and touching heart of our film, for which I'm so very grateful. 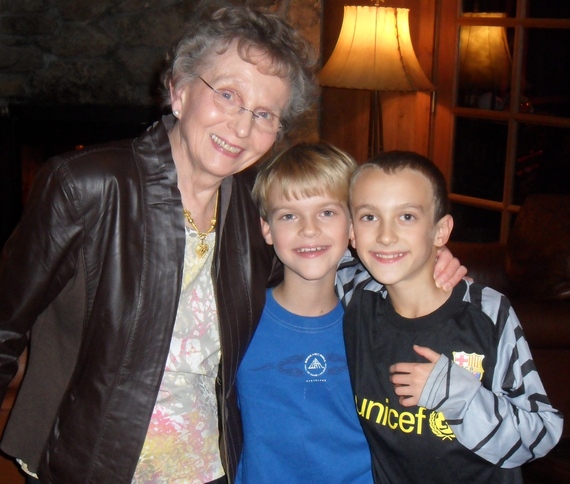 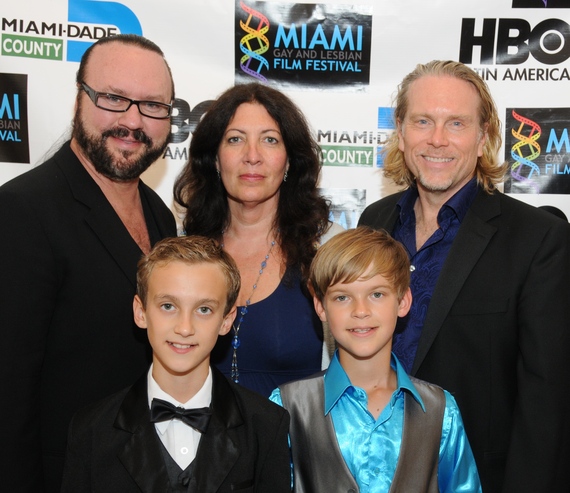 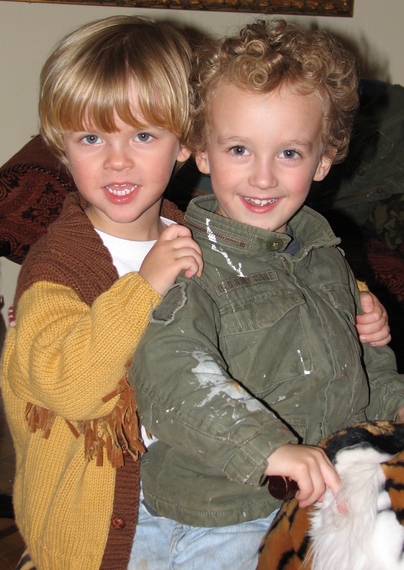 I have to say, though, looking back over all the previews, premieres and pizzazz of sharing TWO with the world, that the journey of becoming and being a father has been my most meaningful life experience so far, and the thing for which I'm the most grateful. And I'm noticing that what I love about being a dad keeps changing the older I become. I used to love getting our little guys ready for bed in those early, tender years when they were amazing, kind, and sweet toddlers. There was nowhere else I'd rather be than in Roman and Nyro's room at bedtime, putting on PJs and sharing delicious snuggles with twins piled on either side of me, together spinning tales of their tiny spirits looking down from heaven, jumping from cloud to cloud and sliding down a rainbow onto the wings of a dragonfly and on into this world. In the dimmed lights of their room, I would begin humming what would become a medley of songs, usually starting with the traditional folk song "Oh Shenandoah," and then we'd segue to some favorite Methodist hymns of my childhood -- "How Great Thou Art," "Old Rugged Cross" -- and more often than not, we'd settle into "Moon River" before everyone had faded off to sleep. This holy ritual was repeated nightly for years and years, and I never really gave much thought to the order my lullaby medley took or why we so often seemed to finish with "Moon River." But to this day, though our twin boys will turn 13 years old in May and frequently give me more than a window into the rebellious, combustible teenagers they are becoming, as I put my lips together and begin to hum those old familiar melodies, a lump creeps into my throat and my eyes brim with tears when I suddenly realize why "Moon River" always came through: It was my dad -- he used to sing that song to my brothers and me -- and it kind of surprises me. 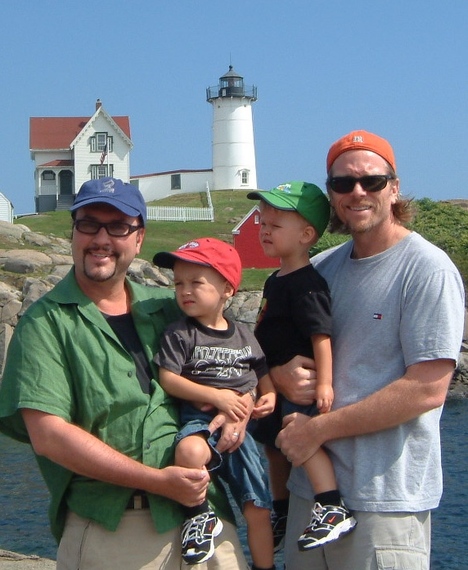 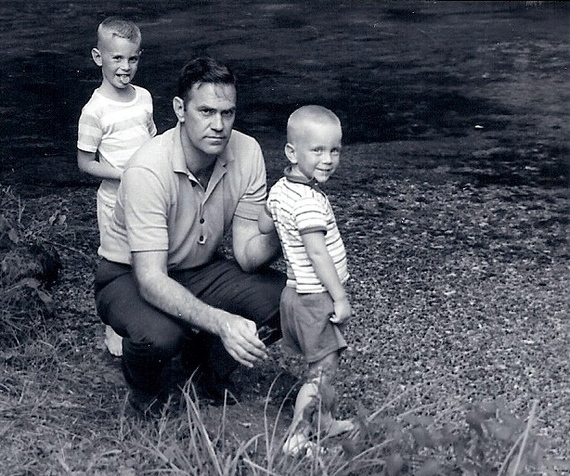 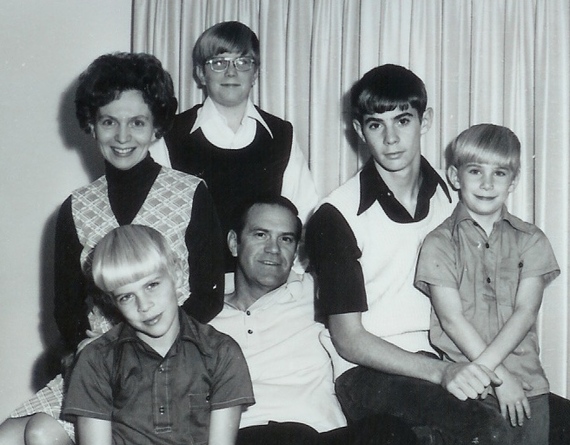 Growing up, I never really felt that I had a particularly close connection with my father. More than anything, within our family, Bob Shaw was the "quiet enforcer" who was called upon by my mother to keep four rowdy boys, born within seven years of each other, in line. The "enforcer" was much needed by my poor mother, who began her life with Dad as an English teacher and shifted into a stay-at-home mom as her diverse and rambunctious clan emerged. I'm the second of four boys (and the daughter my mother always wanted), and my dad's idea of fun, throughout our childhood, was to put us to work doing seemingly endless chores through every season, through the coldest of colds and hottest of hots. We'd bale hay, sweating in long sleeves, jeans and boots in the summer heat of Missouri, and we'd all do our best to avoid getting stung by wasps and bees while picking blackberries dressed in the same suffocating garb on awful, humid days. Our enormous garden always needed planting, weeding or harvesting, and it was left to the rowdy four to maintain the patch. Fall weekends were spent going out to distant farm fields to cut down "volunteer corn stalks" that had sprung up in a neighbor's soybean fields, packing the freshly cut, green stalks to capacity into the back of our Chevrolet Impala station wagon to provide more food for the pet calves we'd adopted from the university dairy when they were four days old. We raised these calves from a bottle as they grazed and grew and, after a year or so, were taken away to "another lovely farm" where we were informed that they would continue to grow and live happy lives (not realizing that the basement chest freezer would soon be filled with enough cut and processed red meat to feed an army). I mean, who does this stuff? I felt like I was an alien growing up in the wrong family in the wrong time and wrong place! I would have much rather remained home listening to my Broadway showtunes, dreaming of a life in the big city where I was sure I'd be performing up on a stage. 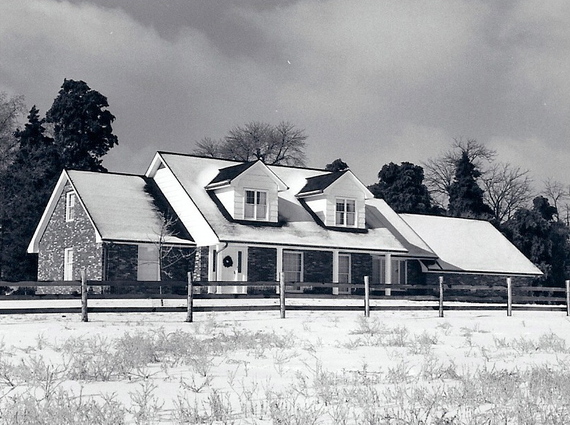 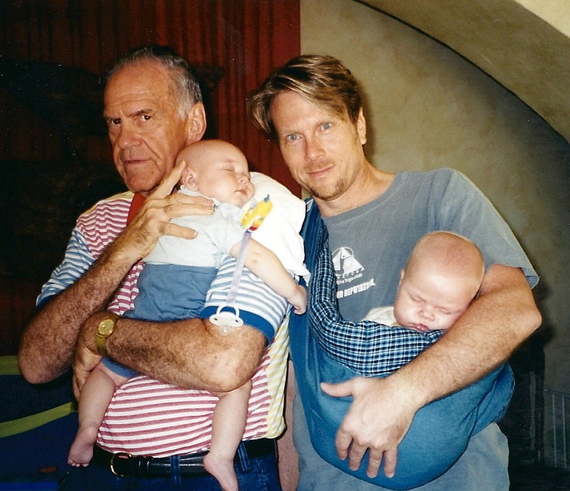 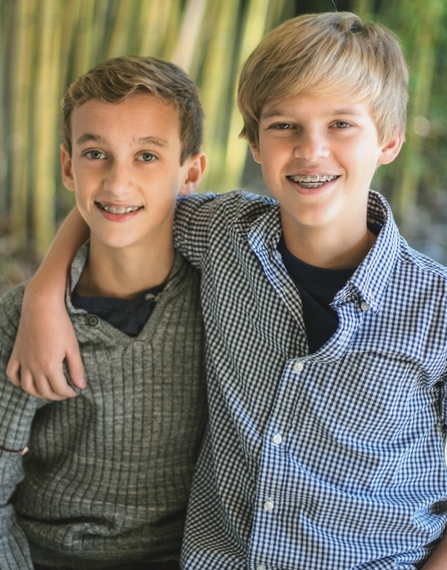 I turned 53 years old last October, and over time my stage-struck dreams have shifted and been redrawn by the hand of the universe within my heart. Desmond and I try to drag our sports-obsessed twins to as many Broadway shows as they can take, which is probably their biggest complaint about growing up with two gay dads. And while Roman and Nyro begin to navigate the tween express lane toward adulthood, I find myself connecting with and interpreting the many voices of being a man that I absorbed from my father. I've been feeling like a delicate veil has been lifted to reveal the gifts of momentary epiphanies that help me along on my parenting path. And as my boys seem to find any and every occasion to argue with their parents and pound on each other, I totally understand why my dad involved and immersed us in so many toilsome distractions. And I've come to realize that if it's true that we choose our own parents, my soul chose the right family and the right time and right place. 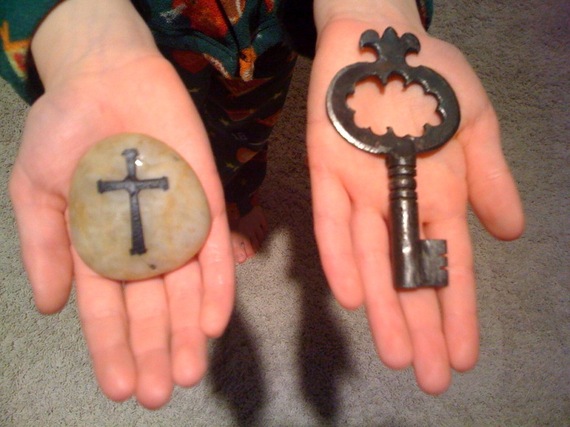 Dad passed away a little more than four years ago, after a slow, 10-year decline, but the day before he died, he was able to go outside and walk across the five-acre field that sits in front of my parents' house to make sure that a distant gate was unlocked so the gardener could enter the pasture the next day. The beautiful metaphor of that moment was not lost on me. Desmond, the boys and I were already making preparations to drive the eight hours from Tennessee to Missouri that Good Friday to spend the Easter holiday with my folks when I received the call from my mom: "Curt, he's gone." Roman and Nyro and I had been putting together a little story to give to Grandpa and were taking a couple of objects we'd found to give to him as gifts to aid him in reaching "the other side of the rainbow," as we knew this would probably be our final visit with him. And as we stood next to the quiet, still man who was my father and shared our last goodbyes, the boys placed their precious gifts under his hands -- "The Key of Love, to unlock heaven's gate, and the Stone of Honesty and Acceptance" -- phrases the boys themselves had come up with the week before, without any help from me. And my father was buried with those two precious gifts. 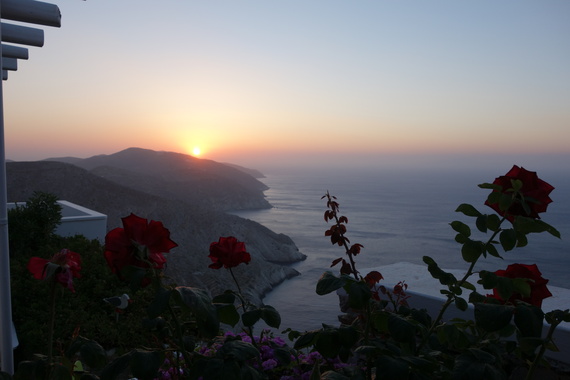 Six months ago, as dusk was falling on the final day of what had been a wonderful family vacation on the Greek island of Folegandros, as Desmond and I made our way down a quiet, familiar cobblestone path to meet up with the boys for dinner, I felt my heart skip a beat, and my eyes suddenly filled with tears as I recognized the beautiful, ethereal melody of "Moon River" reaching out to me from a taverna we were passing. So many things aligned for me in that moment, and it felt like my dad was right there with me on that remote island, a world away from my ancient Midwestern past. And I feel him now more than ever as I draw from my treasure trove of memories, in hopes that one day my voice will reach out to Roman and Nyro at an unexpected time and place and help them recognize and hold close the voices of the men they wish to become. 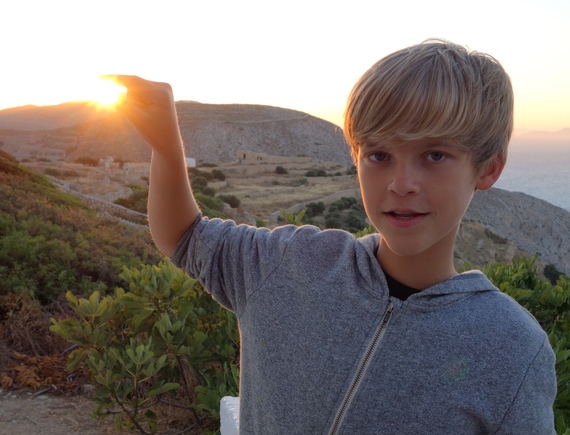 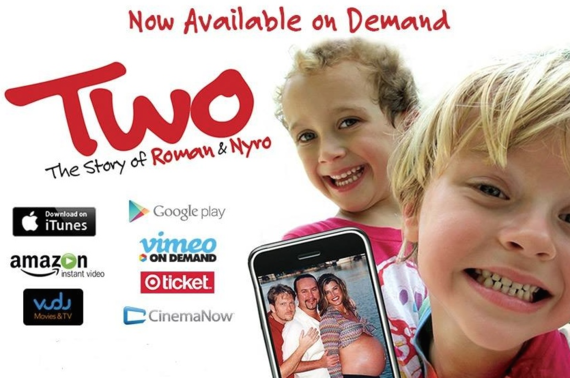 Nashville - based filmmaker, writer and father of "Two: The Story of Roman and Nyro." Husband of Desmond Child