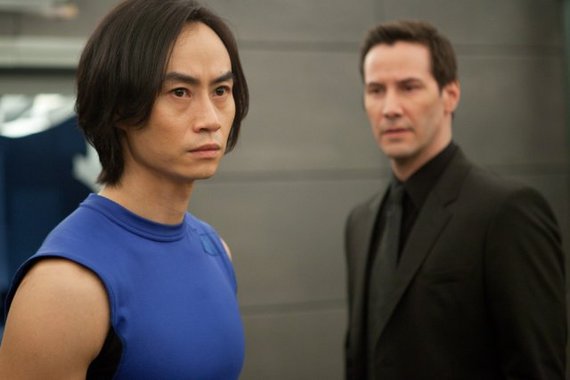 In the Will Ferrell era of Saturday Night Live, there was a running bit: Celebrity Jeopardy, which always seemed to feature Darrell Hammond as Sean Connery, making rude jokes about Ferrell's Alex Trebek.

In one of those episodes, Tobey Maguire portrayed a semi-comatose Keanu Reeves, who kept muttering, "I know kung fu," echoing a line from The Matrix but making it seem hilariously dumb.

I kept waiting for something along those lines but it never came in Man of Tai Chi, Reeves' Hong Kong-action-centric debut as a director. It's not a terribly good film, but it features some of the best martial-arts action I've seen on film in a while.

The story is the time-honored trope of the martial artist who must decide between selling his abilities for money or using them to pursue spiritual goals. Can he find his way back to his own values once he's gone over to the dark side of raw capitalism?

In this scenario, the dark forces take the form of secretly broadcast on-line fights, sometimes to the death. The cops keep trying to track the source of the transmission or its network -- and keep tripping over the dead bodies left behind by the fight-ring's wealthy-industrialist leader, Donaka (Don't Call Me Don) Mark, played by Reeves himself.

He discovers a potential audience-pleaser in Tiger Chen (apparently playing himself), who practices a nonviolent form of tai chi that still manages to win him martial-arts contests. But the teacher with whom Tiger studies is aging and his temple is crumbling around him, targeted by avaricious developers.

When Donaka spots Tiger in a televised tournament, he recruits him to his Tokyo-based operation. Before long, Tiger is winning fights and taking home large wads of cash, with which he is able to help his struggling parents and his teacher.