"We're here to thank the U.S. taxpayers. Your investment in global health is working."

As spin goes, it's a nice line. But obviously the Gateses didn't go to all the trouble and expense of launching a multimedia experience that debuts tonight at 7 p.m. at Washington's uber-chic Harman Center For The Arts (with simultaneous Webcast) simply to thank lil' ol' taxpayin' me. (Couldn't they have just sent a card?)

The Gateses are visiting our nation's capital to reframe the conversation about global health aid. We should spend more time talking about what works, and how to measure it, they said. All too often, the gotcha-obsessed media focuses instead on what Melinda called "slippage."

We've been traveling in the developing world for over a decade. It's so different than it used to be. We're seeing a lot of hope on the ground. It's palatable. And yet so many reports focus on the negative -- people using malaria nets for fishing, or for a wedding dress. Of course you're going to get some slippage on the end. But what about the story that indoor residual spraying and malaria nets are saving lives...lots and lots of lives?

The Gateses met with about a dozen reporters this morning at the Monaco Hotel for a short roundtable discussion about global health funding. Currently, the U.S. budget is roughly $8 billion. The Obama Administration is looking at possibly increasing this aid, which means knowledge of what works is essential.

"Some things, like education funding, are tough to track because of all the management issues. Vaccinations are a lot easier to track, even in a place like Somalia," Bill told our roundtable group. He would like to see the U.S. budget increased, but has no particular number in mind.

Just think about the $8 billion very differently than you might. It's been wildly successful. It shows that if you make these investments early, it has a transformative effect. Hopefully, this will lead people to want to do more, even at a time when there are tough budget trade-offs.

Italy came up during the discussion because that country recently cut its AIDS budget dramatically without much outcry. "It's a terrible thing to have happen," said Bill. "And when a few governments go backwards, it makes it easier for other governments to do the same thing."

The Gateses argue that the further away you are from funding recipients, the less you may know about whether or not your money was well spent. Since the Gates Foundation team goes back and examines whether their programs worked or not, they are able to share this data.

At this morning's roundtable discussion, Melinda was visibly passionate about finding ways to spread the word about success stories. A few weeks ago, she began posting short videos on the Gates Foundation Web site.

But honestly, our talent isn't storytelling. Hopefully our talent is biotechnology, and creation of delivery systems for vaccinations and other life-saving tools. We hope to draw more filmmakers and storytellers into this work, to make sure the budgets for these programs aren't cut just because people don't have an understanding of the difference they can make.

No developing nation has become self-sufficient without first improving their health care delivery system. Often a little aid goes a long way -- for example, vaccinations save millions of lives each year. But according to Melinda, we've still made very little progress on the preventable deaths of newborns in underdeveloped countries. "Nearly four million infants die in that first 30 days. And a half-million mothers die in childbirth every year. We need more American investment in this area."

The world's poor are fortunate to have Melinda and Bill Gates as advocates. Whether or not you agree with the couple's priority list, the Gateses are serious about measuring and duplicating success. Now if only another billionaire philanthropist would come along and create a multimedia experience showing how health care reform could improve the lives of millions of Americans, and create a healthier climate for small business in the United States. 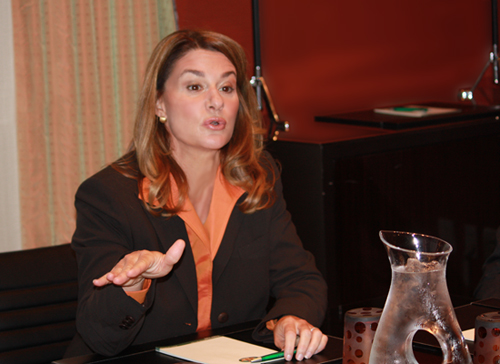