After remaining perfectly preserved for 7,000 years, the world’s oldest mummies have started to rot and “turn into black ooze.” The culprit, scientists say, may be climate change.

The Chinchorro, a hunter-gatherer people who lived millennia ago in modern-day Chile and Peru, began mummifying their dead at least 2,000 years before the ancient Egyptians. According to Harvard University, some of the Chinchorro mummies date back to about 5050 B.C., making them the oldest mummies on the planet. Many have remained well-preserved despite the expanse of time. 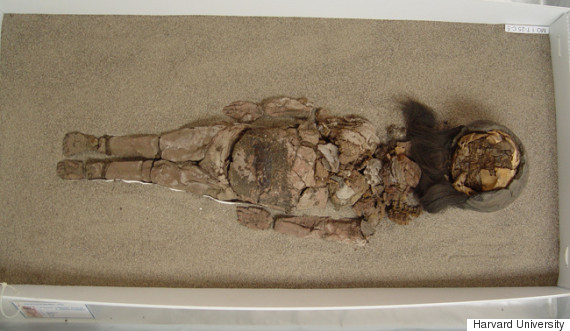 LiveScience reports that 120 Chinchorro mummies are currently housed at the University of Tarapacá’s archeological museum in Arica, Chile. Over the last decade, scientists have noticed the rapid decay of some of these ancient mummies, whose skin has started to go “black and become gelatinous.”

“In the last 10 years, the [deterioration] process has accelerated,” said Marcela Sepulveda, a professor of archaeology at the University of Tarapacá, per a Harvard news release. “It is very important to get more information about what’s causing this and to get the university and national government to do what’s necessary to preserve the Chinchorro mummies for the future.”

So why are these ancient mummies turning into black ooze?

According to Ralph Mitchell, a biology professor at Harvard who was contacted by the museum to test the mummies’ skin, the answer is microbial. Mitchell says that opportunistic bacteria are now making their home on the Chinchorro remains, causing them to quickly decay.

These microbes are not ancient, the professor said, but normal bacteria that typically live on people’s skin.

These microbes thrive in humid conditions, and the humidity in usually-arid Arica, located near the Atacama Desert, has increased in recent years -- possibly, says Mitchell, because of climate change.

“The key word that we use a lot in microbiology is opportunism,” Mitchell said, per the release. “With many diseases we encounter, the microbe is in our body to begin with, but when the environment changes it becomes an opportunist.”

If the mummies are not kept in the right humidity and temperature conditions, "the native microorganisms are going to chew these guys right up," Mitchell told Live Science.

Mitchell's new research will allow the University of Tarapacá’s archeological museum to better care for the ancient mummies. However, as Bloomberg notes, many Chinchorro mummies are still buried in the valleys in the Arica region -- remains that will not enjoy the benefits of being housed in the controlled environment of a museum.

“Is there a scientific answer to protect these important historic objects from the devastating effects of climate change?” Mitchell said, per Bloomberg. “It’s almost a forensic problem.”