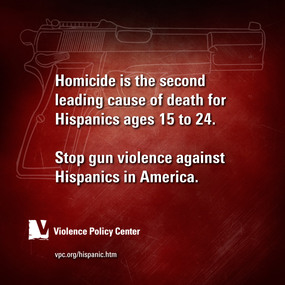 These eye-opening statistics can be found in a new study by my organization, the Violence Policy Center, which you can read here in English or in Spanish. The study also found that homicide is the second-leading cause of death for Hispanics ages 15 to 24.

What the study makes clear is that gun violence in the Hispanic community is a public health crisis, and elected officials need to respond to this crisis without delay. While no American is immune from the risks of gun violence, the sad fact is that this crisis has a disproportionate impact on people who identify as Hispanic. (Hispanics are not the only group that suffers disproportionately -- another report we released this year found that African Americans also face a greater likelihood of being murdered.)

Our study also found that guns are used in more than two-thirds of homicides with Hispanic victims. Separate data from the Federal Bureau of Investigation's Supplementary Homicide Report shows that in 2011, for homicides where the victim was Hispanic and a gun was used, 78 percent of the shootings involved a handgun.

However, another important lesson from this study is we simply don't know enough about Hispanic victims of gun violence. That's because government agencies often report data on race but not ethnic origin. Because a limited amount of data exists, the total number of Hispanic victims is almost certainly higher than the reported numbers suggest.

As a result, we recommend that government agencies that collect data on death and injury should obtain complete information on the ethnic origin of individuals in addition to their race. Complete and accurate data collection on Hispanic victims of violence is necessary to not only understand the full scale of this crisis, but to begin addressing it.

Our report contains several other recommendations on how to improve data collection on lethal violence against Hispanics, including:

As public officials work to collect more data, we hope community leaders, local elected officials, and members of Congress will consider the facts in our report as they work toward solutions to this crisis. There is no excuse for any group of people to suffer disproportionately from the devastating effects of gun violence.