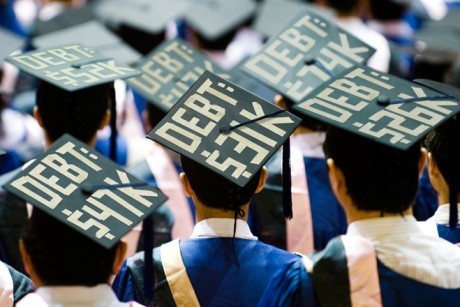 Sixty-Eight percent of public colleges provide scholarships to students who don't need financial aid. That money can instead be going to those students who could actually use these funds to make their way through college without crippling debt. It's not like wages are growing but even in the few years that I've been teaching, I've seen the cost of higher education outpace inflation and wages. Meanwhile state and federal aid for higher education has dropped over the last decade.

My students are left facing a quandary: if they don't spend hundreds of thousands of dollars to get educated, they won't end up earning the money they need to afford an increasingly out of reach middle class lifestyle. But if they borrow the thousands of dollars they need to obtain an education, they'll end up spending 2/3's of their career burdened by debt, delaying important economic milestones like purchasing a home or starting a family.

And those who need an education the most - the low-income or working poor - are often the ones who have to borrow the most to pay for college. Borrowing more than $10,000 can be detrimental for these students who often have no family resources to buffer against the risk of borrowing.

Even relatively affluent or economically stable individuals like myself are burdened with inordinate student debt: my law school loan repayment is $1500 a month. Today, we have become a country where student borrowing is the primary way young adults pay for college. Borrowing was meant to help defray educational costs, not add to them.

And very few people seem to care. Not a single candidate addressed or raised the issue of student debt in the most recent Republican presidential debate.

There are so many easy fixes to the student debt problem that it makes the lack of concrete action on the issue all the more astounding. For instance, Pell grants (the leading source of aid for low-income students) haven't kept up with inflation or the cost of tuition - increasing Pell grants even marginally will pay dividends for decades and cement the country's status as a leader in top notch higher education.

Corporations, individuals and entities of all kinds can discharge their debt and start over when faced with financial troubles. But students, who are some of the most economically vulnerable individuals in our society, find it extremely difficult if not impossible, to declare bankruptcy. Even Sallie Mae (the largest private student loan provider) supports rules making it easier for students to discharge their debt after having made a reasonable attempt to pay off their loans.

As the election looms closer, it's important to think about the student debt issue. Some judges have already started questioning the economic viability of pre-existing bankruptcy rules. As a society of students, professionals and parents, we need to start doing the same.