What a difference a year makes!

As a transgender woman dedicated to teaching acceptance and living our own truth, I want to ask every person I meet to pinch me, to make sure I am awake and not just dreaming all of what has happened. Pinch me, please... thanks, I am awake, yes, but I am still a bit numb taking this all in.

It was only last June, that Laverne Cox was the cover girl of TIME Magazine, which proclaimed The Transgender Tipping Point, and discussed this as America's next civil rights frontier. For many people both within and outside the transgender community, it seemed like a tree truly did tip over and when it hit the ground so many of us could feel the Earth move. 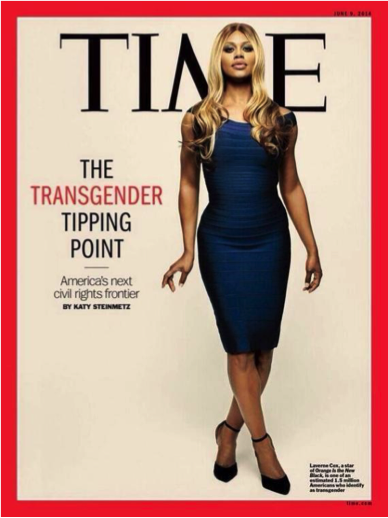 Over the past year, we have seen many models not only come out as transgender, but also transition in the public eye. The New York Times in its Transgender Today series, is now publishing the stories of as many transgender people who choose to contribute. There hardly seems to be a day going by where there is not another story or blog about one or another aspect of being gender variant (just not fitting into a strict binary, male or female construct). I know I am contributing to this right here.

Yet, with all this exposure, all this visibility, that in my mind is all good and making such a huge difference in understanding and acceptance, I know I was thinking there could not be another major magazine cover girl that could get the attention of the public in a way that occurred with Laverne Cox last June.

But now I wonder if this is true. Perhaps as Yoda told Obi Wan, (when Luke left to help Hans and Leia before his Jedi training was completed) "There is another!"

We now hear reports that the July issue of Vanity Fair will be of Ms. ("HER") Jenner. This will be the first time we will meet her and perhaps by this time we will learn her proper name. It is reported that Annie Leibovitz will or has done this photo shoot, so at the very least, it is certain to be striking. However, we do know that Vanity Fair is no stranger to controversy so I am wondering what the captions for this cover might proclaim as the editors decide what they are going to communicate.

Tipping points are funny things. I learned this the hard way. Both as a boy scout, with just a small and then larger axe learning to chop down some small trees, to in later years as a homeowner, with that great and scary toy of a gas powered chain saw. I never quite learned to get the trees to fall exactly where I wanted. No matter how clever I thought I was; no matter how much I calculated the angles, it seemed I really lacked the skill to know exactly where they would drop. The impact on the surroundings was often hard to deal with. I learned to use a wedge, but I came to know that getting trees to tip where I wanted was a learned skill and took a great deal of practice. So often the learning examples were not pain free.

It took me a long time to accept that when I try something new, even after I read about it and learn everything I can, the only true learning is by "doing" and accepting the mistakes and errors that the experiences will teach. Reading Malcolm Gladwell's books, The Tipping Point and Outliers has helped me to understand the phenomena of needing 10,000 hours of practice to become an expert. It is OK to make mistakes as long as we can learn from them. This truly came in handy for me during the early days of my own gender transition, and for anyone who will listen I will always advise take baby steps and always make sure you are on solid ground.

There is the famous thought experiment: If a tree falls in a forest, and no one is around to hear it, does it make a sound?

We know that just one year ago, the sound of the Time Magazine cover was heard very loudly around the world. The last circulation numbers I found (from 2013) showed Time at over 3 million copies. At that time, Vanity Fair's circulation was reported about a third of that at just over 1 million copies in circulation. It should be interesting to listen to the sound -- I am sure there will be one -- when Ms. Jenner becomes a cover girl.

I don't know if all the angles have been calculated and the wedges put in the proper place, to make certain that the tipping of tree lands exactly where they want it. I sure hope so, as there are so many beautiful surroundings that we really need to keep whole. Tipping points are tricky things and I sure hope we keep these trees tipping in the right direction.

Grace Stevens is a transgender woman who transitioned at the age of 64 and holds a Masters Degree in Counseling Psychology. She is a father of three, grandparent of two, athlete, advocate and author of No! Maybe? Yes! Living My Truth, an intimate memoir of her personal struggle to transition and live her true life authentically as a woman. For more information about Grace, her speaking about authentic living with Living on-TRACK, and how Gender Variance Education and Training can help you, visit her website at: http://www.graceannestevens.com/. Follow Grace on Twitter: www.twitter.com/graceonboard .