WASHINGTON -- Soon after the news broke that former first lady Nancy Reagan had died on Sunday, obituary writers and old White House staffers set about assessing her legacy. The New York Times credited her with turning around President Ronald Reagan’s sinking poll numbers after the Iran-Contra scandal. Looking for an excuse to run pictures of the first lady talking to the TV character ALF and sitting on Mr. T’s lap, MSNBC tried to make the case that she brought Hollywood to the White House.

All of this sells Nancy Reagan a little short. Her most lasting -- and devastating -- impact may be as a drug war policymaker (although the Reagan record on addressing the AIDS crisis is also shameful).

Not only did her "Just Say No" campaign become as famous as any sitcom star's catchphrase, but she also supported a notorious drug treatment for teenagers that is still being practiced.

Reagan and the first lady were big backers of Straight Inc., a chain of drug rehabilitation centers co-founded by top GOP fundraiser Mel Sembler. The facilities, which treated teenagers, promoted the idea that drug addiction can be conquered through a combination of isolation and verbal and physical abuse.

The treatment, which could go on for months, consisted of daylong sessions in which Straight Inc. staff would yell at or assault residents and then get them to turn on each other. The first lady was so proud of her association with Straight Inc. that she brought Princess Diana to one of the facilities in Springfield, Virginia, for a tour. It didn't matter that "60 Minutes" had published an expose on the chain a year earlier.

Last year, as part of a year-long investigative story on the heroin epidemic and the U.S. drug treatment system, The Huffington Post published an original audio documentary about Straight Inc. and its predecessor, The Seed. Former residents recalled harrowing moments during treatment and described how the experience shaped their lives.

One Straight Inc. resident told us of being forced to humiliate others as part of the program: "I was in this universe where the social currency was the infliction of pain, and I took part in that wholeheartedly so that I could get out of there. And that was my treatment."

He recalled having to verbally punish another resident who later committed suicide.

You can listen to the full audio documentary here.

Mother Jones reported in 2007 that Straight Inc. closed in the '90s after facing several legal judgments. But there have been spinoffs. The treatment philosophy Nancy Reagan promoted persists, especially in teen boot camps and residential treatment centers. Meanwhile, you can still find websites dedicated to helping the survivors of Straight Inc. 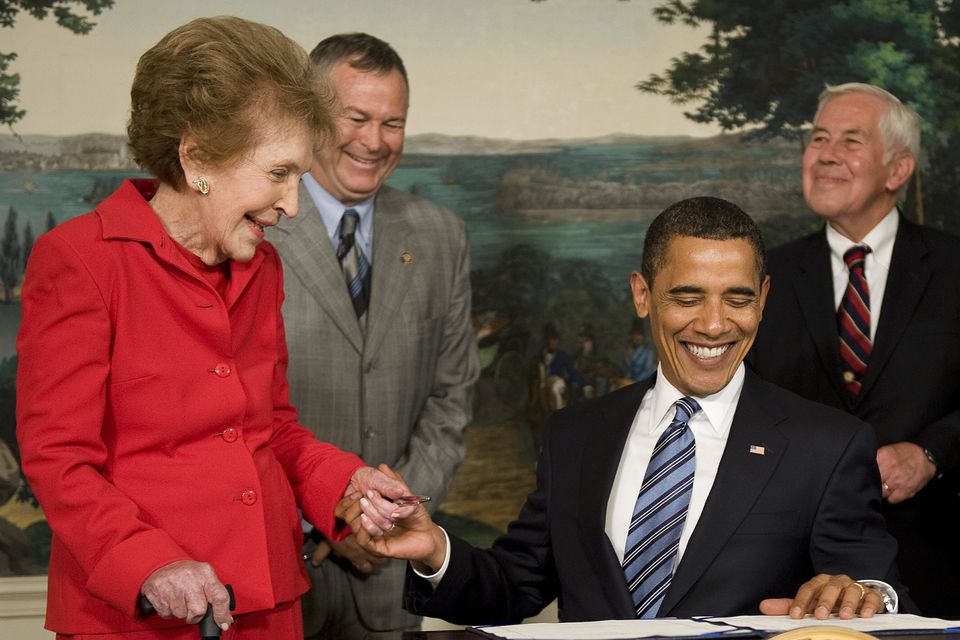 1 / 32
President Barack Obama and First Lady Michelle Obama
"Nancy Reagan once wrote that nothing could prepare you for living in the White House. She was right, of course. But we had a head start, because we were fortunate to benefit from her proud example, and her warm and generous advice.<u></u><u></u><u></u>&nbsp;<u></u>Our former First Lady redefined the role in her time here. Later, in her long goodbye with President Reagan, she became a voice on behalf of millions of families going through the depleting, aching reality of Alzheimer&rsquo;s, and took on a new role, as advocate, on behalf of treatments that hold the potential and the promise to improve and save lives.<u></u><u></u><u></u>&nbsp;<u></u>We offer our sincere condolences to their children, Patti, Ron, and Michael, and to their grandchildren.&nbsp; And we remain grateful for Nancy Reagan's life, thankful for her guidance, and prayerful that she and her beloved husband are together again."
Jim Watson/Getty Images