Less than a quarter of one percent, 0.23%, of the American cattle inventory was lost to native carnivores and dogs in 2010, according to a Department of Agricultural report released last week. These findings call into question the tens of millions per year taxpayers and livestock growers spend on lethal control of native carnivores.

The government's own data show that the real killers of cattle are not a few endangered wolves or other wildlife -- they're illness and weather. Yet, the predation myth has directly contributed to a federal, 100-year, paramilitary assault on millions of native animals and birds in America. Despite governmental evidence about miniscule livestock losses, ongoing covert federal wildlife-killing operations are conducted each year on our most treasured wildlands and forests. 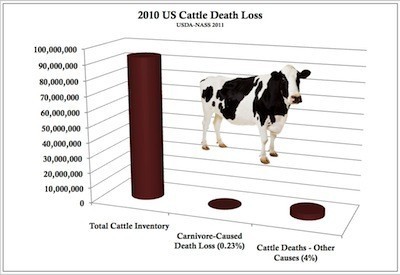 The National Agricultural Statistics Service (NASS), an arm of the US Department of Agriculture (USDA), compiled the newest cattle inventory and loss numbers. In 2010, cattle inventory dipped to 94 million head, down from 104.5 million in 2005 -- the last time NASS issued its Cattle Death Loss report. According to the report:

Wildlife Services' unending arsenal of poisons, aerial-gunning crafts, and hidden explosive booby traps not only assault native wildlife -- including a terrible toll on wolves, but also people and their pets. American taxpayers unwittingly foot a portion of this $120 million annual bill -- while its sister agency shows that few wildlife kill livestock.

According to NASS, ranchers and farmers reported that they spent $185 million on non-lethal forms of wildlife control such as guard animals, exclusion fences, and removing calf carcasses.

The livestock predation myth is a big lie imposed on the American public. While lethal predator control doesn't even help the fat cats of agribusiness, it does ensure that the USDA-Wildlife Services stays in business. While the feds assault millions of our native wolves, bears, cougars, and coyotes, the true cattle killers are illness and weather. The Wildlife Services' lethal predator control program must end, and the taxpayers, wildlife, and wildlands will reap the benefits.