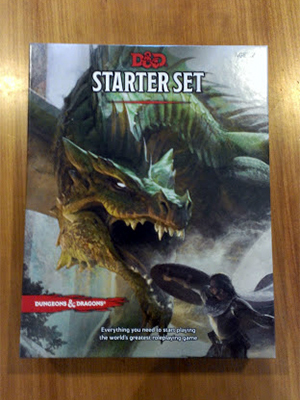 I first played Dungeons & Dragons -- the original edition -- back in high school in the early 80s. Now I consider my son's recent interest in the game one of the best things that's ever happened to me as a parent. I was thrilled, therefore, to discover that the new version of D&D, which officially launches this week, is clearly and deliberately inclusive of a diverse range of gender identities, gender expressions, and sexual orientations.

The Version 5 Basic Rules, which are now available for free download, urge players to: "Think about how your character does or does not conform to the broader culture's expectations of sex, gender, and sexual behavior. . . . You don't need to be confined to binary notions of sex and gender." For example, the rules say:

"The elf god Corellon Larethian is often seen as androgynous or hermaphroditic, for example, and some elves in the multiverse are made in Corellon's image. You could also play a female character who presents herself as a man, a man who feels trapped in a female body, or a bearded female dwarf who hates being mistaken for a male. Likewise, your character's sexual orientation is for you to decide."

D&D has long attracted LGBTQ players, among others, as these examples of gay and transgender players (and my own experiences) show. Many of us have been bending our characters' genders and sexual orientations for years, but it's terrific to see the game officially embrace this. Kudos to the makers of D&D, Wizards of the Coast.

I was surprised, therefore, to learn that Wizards' parent company, Hasbro, only scored a 25/100 on the most recent HRC Corporate Equality Index, which measures LGBT-inclusive policies and practices. (Competitor Mattel scored a 95.) Despite the lackluster score, its equal opportunity policy does include sexual orientation, and it has not participated in actions that would undermine LGBTQ equality, according to HRC. It seems to me, then, that it might be persuaded to improve its policies, especially if a subsidiary like Wizards is publicly embracing a broader view of gender and sexuality. It doesn't take a D&D perception check to know that's good business.