Gov. Christie and his treasurer are standing firm. They say there will be no tax increases to help New Jersey out of its budget crisis (except, of course, for the various fee increases and tax "adjustments" already included in next year's proposed budget). Why? Because, they claim, the wealthiest New Jerseyans may well "get up and walk out" of the state instead of face a tax increase. This is an extension of their oft-echoed claim that the state's taxes are already too high and are forcing folks to flee.

But despite the scare tactics, differences in tax rates among states have little to no effect on whether and where people move, according to a new analysis by the Center on Budget and Policy Priorities. Instead, the few Americans who actually relocate from state to state (about 2 percent of all residents in any given year) do so for jobs, family and weather - not taxes.

The Internal Revenue Service tracked interstate migration of federal taxpayers between 1993 and 2011 and found that, while 1.7 million households moved out of New Jersey during that time, 1.37 million - or 81 percent - moved to New Jersey (and this does not including the steady growth of foreign-born residents). Of those households that moved out, the average adjusted gross income was $71,644, while it was $77,997 for those who stayed in New Jersey and $69,748 for those moving in. (As we recently showed using a different data set, the number of New Jersey income tax filers with incomes over $500,000 actually increased from 2002 to 2011, despite several income tax increases on these residents during that time.) 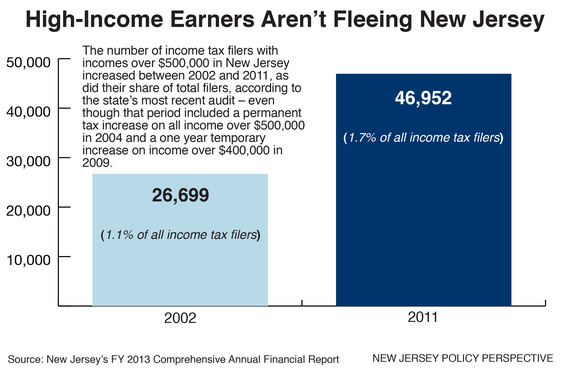 Moreover, most of those leaving New Jersey are lower-income, not wealthy. For example, half of the folks who moved to Florida and North Carolina between 2008 and 2012 earned less than $50,000 a year, while less than 25 percent had incomes of over $100,000 - and the share of them moving to North Carolina - a state with an income tax - was larger than the share moving to Florida, which has no income tax.

For interstate movers who are still working, job opportunities and the potential for income growth are a key factor. Expenses are much less of a factor, but they do play a role. However, taxes - particularly income taxes or business taxes - aren't the most important cost of living for potential movers to take into account -housing costs, which include New Jersey's high property taxes, are.

This new, detailed analysis is the latest proof that New Jersey should concentrate not on taxes but on the reasons for its slow job growth, which begins with our neglect of the assets that make this such a desirable place for economic activity: our location, convenient access to New York and Philadelphia, a well-educated workforce, great public schools and the appeal to striving immigrants from around the world.