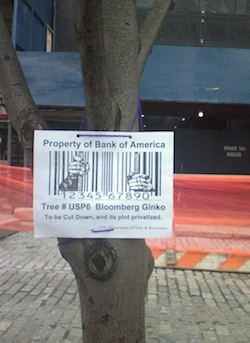 Greg Miller is Executive Director and Founder of Dance Parade, a not-for-profit cultural organization which organizes an annual event in New York City. Seven years ago, he held his first event in Washington Square Park. The end of the parade wrapped up under the park's Arch. The following year, Miller wanted to repeat the event at the historic downtown park but it had since gone under construction and was inaccessible. So he looked to midtown's Bryant Park. He spent "many hours putting together a proposal" for the four hour free event, "very detailed, which is what they require." The 'they' is the Bryant Park Corporation from which he received a response: "Thank you, that will cost you $100,000 -- at the non-profit fee." As a non-profit, this was well out of range of their budget; the group ended up at Tompkins Square Park in the East Village at a fraction of the cost.

Such is the way private corporations now running many New York City parks discriminate against the public's use without giving the appearance of selectively censoring particular projects.

In the 1970s and 1980s, Manhattan's Bryant Park had fallen into disrepair. Enter the Bryant Park Restoration Corporation, commissioned to restore the park in exchange for managerial rights over it. Now re-named "the Bryant Park Corporation" (BPC) -- "restoration" having been dropped from its raison d'être -- it shares a management team with the nearby 34th Street Partnership BID (a business improvement district). In charge of both is Daniel Biederman, who previously had one more BID under his belt, the Grand Central Partnership. But in 1998, Mayor Rudolph Giuliani -- looking to get rid of an individual he perceived as threatening to his exclusive power -- decreed that Biederman should only be in charge of one BID at a time (Guiliani was perhaps correct in this, but for the wrong underlying reasons). To mollify the Mayor (who threatened to cancel the city's agreement with the BID unless Biederman complied with his directive), Biederman -- a favorite of the neo-conservative Manhattan Institute -- relinquished the Grand Central Partnership. His fate was unclear until Mayor Michael Bloomberg's first term when the new Mayor reversed course and gave Biederman the go-ahead to continue running the two BIDs at once.

The BID seeks out and schedules major corporate events for Bryant Park, and excludes smaller community-based and not-for-profit events. This occurs as a matter of course, as illustrated in the story of Greg Miller's "Dance Parade," without the BID needing to set a policy about such discrimination. These corporations are the only entities that can afford the large fees. While some community groups are allowed to hold programs in the Park, the selective nature of this privatized selection process is anathema to the whole idea of what makes the park "public." The park here is a corporation, run like a corporation, and it caters to other corporations. In recent years, the park added a skating rink sponsored by CitiBank -- CitiPond -- that covers the entire lawn in the winter. The bank's advertisements are prominently displayed rink-side along with logos of corporate advertisers such as Coca-Cola and the Wall Street Journal. Southwest Airlines runs a café in the park, "The Southwest Porch."

Whatever positives might have once been evident from the restoration of Bryant Park and its subsequent marketing and management, the result, now twenty years later, is a corporate playground; the City has handed a private corporation the reins to run one of New York City's premier public spaces, no strings attached.

Nor is this blatant privatization of public space limited to Bryant Park, which abuts the elegant New York Public Library. (No longer are the famed marble lions able to guard the public commons and ward off the bears and bulls as they once did.) About a decade after Bryant Park, Madison Square Park was similarly determined to be in need of restoration. A "Friends of Madison Square Park" was formed in 2002; it focused solely on raising funds, not on running the park. But, as is so often the case once opportunity pries that privatizing door open just an inch, within two years the "friends" morphed into the Madison Square Park "Conservancy," with restauranteur Danny Meyer at the helm. Meyer "took on" the task of managing the park as well. Not coincidentally, in 2004, Danny Meyer opened his lucrative Shake Shack in Madison Square Park, which collected revenues of $4.9 million in 2009. Just $220,256 of that went to the city and $348,389 to the Conservancy. Journalist Patrick Arden reported in "The High Cost of Free Parks" that while concessions in other parks pay around 20 percent of their take to the city, Meyer's concessions pay much less. And Meyer adds to his company's profits by catering private parties in the park for $15,000 an hour.

As mentioned, when Meyer opened his for-profit "burger stand," he was the director and co-founder of the Madison Square Park Conservancy, the nonprofit corporation approved by New York City to oversee that park in the public interest. Meyer made a private windfall from his "managing" of the Conservancy, at the expense of the public, and, as with Bryant Park, corporations are invited to feast on the public trough, holding high profile, flashy events there. Corporate logos abound. Is it any wonder? The boards of both parks' conservancies consist largely of CEOs from real estate firms and banks.

In 2007, the New York Times reported that the community surrounding Bryant Park and Madison Square Park was not so happy with the commercialization of the parks under the conservancies' leadership". Maxine Teitler, then chair of Community Board 5, said:

"There is a lot of concern about the commercialization of the parks," said Ms. Teitler, whose board covers an area that includes Bryant Park and the two other parks that form Midtown's green corridor: Madison Square Park and Union Square Park. ... "They [residents] don't want events that exclude other people. They don't want noisy, loud events in the park. And they certainly don't want commercial events that take over for more than a day or two."

Not to be left out, a bit further downtown, Union Square Park has its own BID too, the Union Square Partnership. The BID's role is to promote businesses around Union Square Park. But it also has been charged with the role of running the park itself. Against the public's wishes, the BID plans to place an upscale "seasonal" restaurant inside the park's historic Pavilion, site of the rally for the first Labor Day Parade in 1882 and of many protests and rallies since. The community's plans for the space included continued year-round use for city activism as well as yoga, music, dancing, classes, kids' activities, and more. But the BID, colluding with the Parks Department, thought Union Square needs one more restaurant, to join the 107 or so others that are within a two-block radius. Danny Meyer pops up here too. Meyer had long been involved in the leadership of the Union Square Partnership. Is a Shake Shack in store for Union Square Park as well? A lawsuit is currently underway and has - for now -- halted the project.

These three New York City parks -- Bryant Park, Madison Square Park, and Union Square Park - all have slightly different structures running them. What they have in common is their corporate makeup -- one is a flat-out corporation, one a conservancy, one a BID -- and in all cases a disconnect from the public.

During a radio show on WNYC broadcast earlier this week, attorney Jim Walden, representing constituents who are trying to protect their own parks (against NYU, Brooklyn Bridge Development Corporation, and more) told Leonard Lopate on a segment,"Selling and Giving Away NYC Parks," "development corporations and conservancies don't have the same transparency, visibility, sunlight that a city agency would [in theory]. ... From a pure public policy perspective, as long as the private interests that are contributing to the park understand that it's no different than making a charitable contribution, once you give the money, you're done. [In that case] There wouldn't be a problem. [But that's never the case.] The problem is control. With the private money coming in to the park, there is some giveaway of control that ultimately allows a foot in the door, ultimately resulting [in] the park either changing, shrinking or going away completely."

Our City-run Parks Department, under New York's billionaire 3-term Mayor and his appointees, has relinquished its mandate to serve the public interest and protect the Commons, and is handing over our crown jewels -- New York's public parks -- in the name of "business as usual."

Previously in this series, Privatization of the Commons in Mayor Bloomberg's New York: Part I.

Next up -- Part III looks at the history of Central Park, the High Line, and how real estate plays into it all plus a closer look at the New York City Parks Department and other cities. Part IV returns to Washington Square Park where a private Conservancy looms, threatening the unique nature of this public park.