First, let's consider what Robert Hooke had to say when he used the microscope to compare the head of a needle with the legs of fleas. I have had recourse to this fascinating thought before, and no doubt I will again:

The Image we have here ... was the top of a small and very sharp Needle, whose point nevertheless appear'd through the Microscope above a quarter of an inch broad, not round nor flat, but irregular and uneven ... so many marks of the rudeness and bungling of Art. So unaccurate is it, in all its productions, even in those which seem most neat, that if examin'd with an organ more acute then that by which they were made, the more we see of their shape, the less appearance will there be of their beauty: whereas in the works of Nature, the deepest Discoveries shew us the greatest Excellencies.

Now let's look at a sculpture British artist Nicola Hicks has up at Flowers Gallery in New York right now (she is also showing at the Yale Center for British Art in New Haven): 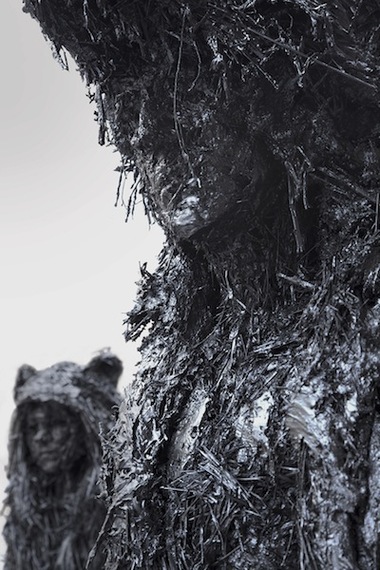 Hicks's work reminds me of Hooke. Until fairly late in the history of art, I think it would be fair to say that most artists, observing at a human scale, pursued an effacement of the naturalness of their materials, seeking the artful sharpness of the pin. The successive media of art represented advances toward some perfect Material, emptied of its entire physical origin, capable of embodying the will of the artist alone. Where the coarse reality of materials could not be successfully hidden, it could be aestheticized, as in Rembrandt, who, rather than suppressing the materiality of paint, establishes the dominion of his mind and hand.

Art, in the West at least, stopped running from its media in the late nineteenth century. Pivoting where it stood, it began to grapple with its materials as physical phenomena. Artwork, which had achieved a kind of lunar immaterial perfection in Ingres and Bouguereau, began to submerge back into the alien Excellencies which Hooke described in nature.

Painters got the glory, but sculptors led the charge. Sculpture has always faced more persistent problems of material than painting; it is easier to perfect the distribution of pigments, even in the very limited universe of pre-industrial pigments and mediums, than it is to bend the independent will of stone, wood, clay, and bronze. As early as Degas and Rodin, we begin to see sculpture abandon the mimesis characteristic of the baroque masters and assert, instead, "I arise from clay, and clay I remain." 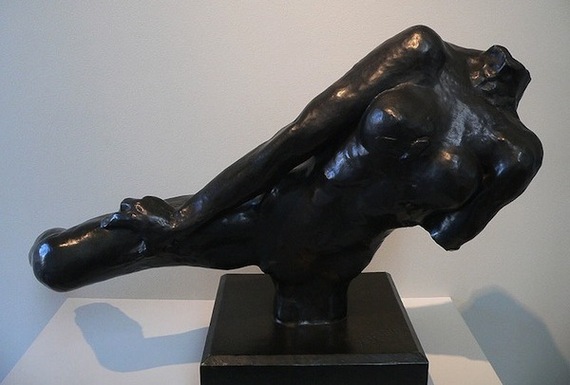 This trend reaches an apotheosis in Giacometti's intensely textured, gnawed-away figures. It is said that, seeking the logical endpoint of his devotion to the necessary and the minimal, he went through a period when he made his figures ever smaller, and whittled away ever more of them, until what was left crumbled to dust in his hands. What more is this than the total dissolution of mind in matter? 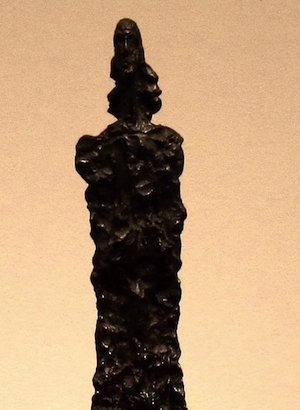 Sadly, this interesting avenue of inquiry withered. It depended for its dynamism on the foregrounded struggle of two principles: on the one hand, the itself-ness of the artistic medium, and on the other, the assertion of representation in the mind of the artist. The first principle rapidly got a lopsided upper hand, and the project collapsed. Conceptualism later re-asserted Mind, but disdained representation.

Therefore, Hicks's work represents a kind of bulletin from an alternate history of art. In Hicks's universe, the struggle between representation and medium continued to evolve. And indeed, she does stand at the end of a line of artists for whom this argument could be made: Eva Hesse, Deborah Butterfield, Nancy Graves, Kiki Smith, William Kentridge. These are artists who work in soft forms with jagged edges. Most of them are women, a topic worth considering. But their absolute number is small.

Enter Hicks, with her nearly lunatic manufacture of sculptures out of, in part, straw. She uses clay and plaster as well, and she sometimes casts her work in bronze. She is not unique with regard to her materials or her general aesthetics. But she is one of the best I have seen in reconciling the furious antagonisms of the territory she inhabits. 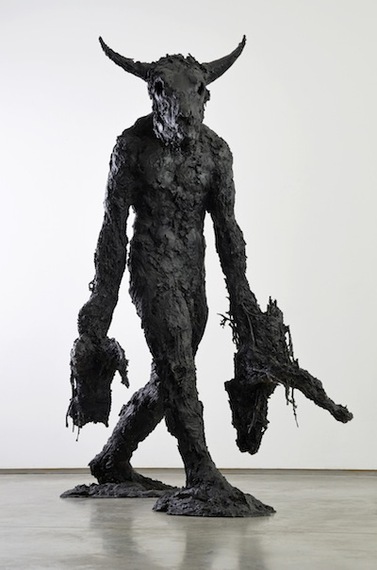 Look at this figure, at the naturalism of his threatening posture, which determines and is determined by every element of his body: the triangle of his shoulders and compression of his chest define his hunch, and he strides forcefully like Rodin's preaching John the Baptist, his spine torquing so that he glares dead-on at the viewer who approaches from the side. 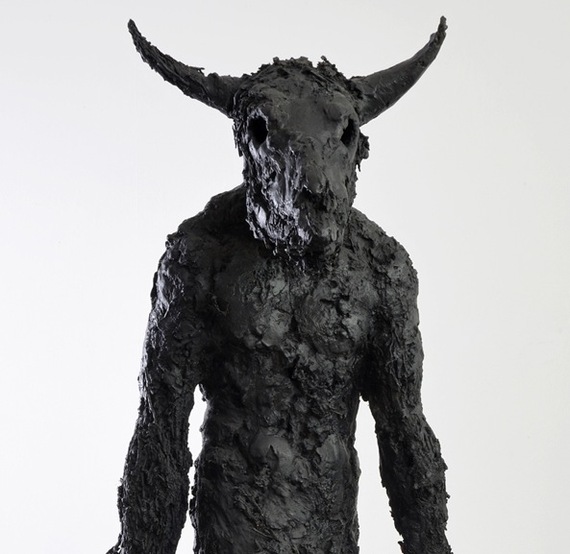 He is a nightmarish figure. We wish he had not noticed us slinking past. And we cannot forget that he is fabricated out of a material that has its own agenda, that constantly threatens to dissolve back into mud and slime and straw.

Hicks simultaneously celebrates representation and material. Moreover, she adapts her subject to her idiom. She works with primitive materials, and so she tells primitive stories, from the age of gods compounded out of men and animals. She is extraordinarily sensitive to animal behavior and shape: 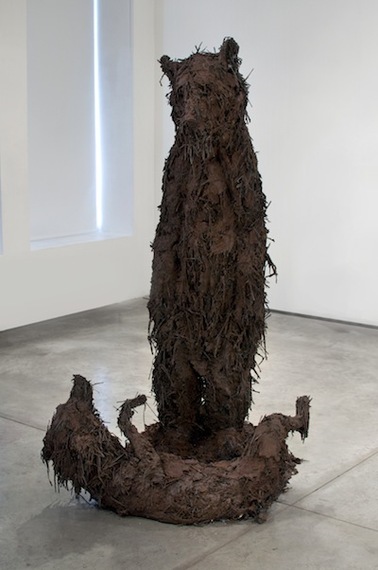 And yet she is also awake to the human, as humanists understand the human: 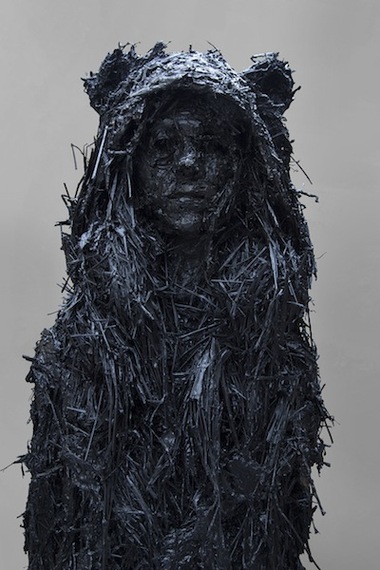 This is a fabulous thing, this half-emergence of form out of chaos, so that the form and the chaos exist together. It argues that the classical forms of sculpture, the beautiful figures and noble emotions, are legitimate and continue to be necessary, but that the abandonment of raw matter doomed sculpture to Hooke's "rudeness and bungling of Art." Her work argues that nature's "greatest Excellencies" must be woven into the program.

I don't think I'm just making this up to be clever or to have something to say. I believe that this assertion about the redeeming presence of nature in art really exists in Hicks's work. It is an assertion in which I myself do not especially believe. But Hicks, with a faith that is steadfast and pure, that lends integrity and vitality to every aspect of her figures, makes work out of her faith that allows me to see things as she sees them.

This is a power of art, a power that bridges chasms. One way to know you are in the company of art is when it persuades you to have this conversation, a conversation engaged in not to convince but to illuminate. What good is that? Simply this, that when you walked into the gallery, you had one thing, and when you left, you still had that thing, and also you had a new thing. The artwork made you bigger, it made your world richer and it increased the number of possibilities it held.