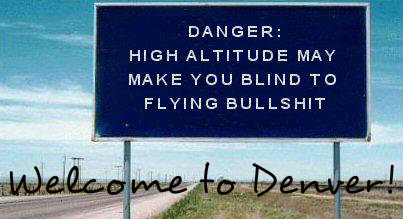 This Week's Poll from the Lester & Charlie Institute of Forward Thinking:

President Obama kinda left us stunned last Wednesday. We're not talking about the debate, which, if you watched, you know was about as one-sided as Terry Schiavo's last interview on CNN. No, we're talking about the email we got from him five minutes after he went off the air that said he hoped we were "proud" that he was "out there explaining the vision we share for this country" and would we mind tossing him another five bucks?

What we'd like to toss the president is something cheaper. As it happens, the vision we have for this country is one we imagine we share with millions of other viewers -- one in which the president doesn't stand by mute as the smarmy crackpot next to him vomits lies all over our television screens.

"An unhelpful debate," crowed The New York Times the next day. "A sick joke," wrote the Times' Paul Krugman, pointing out, in just one example, how Romney's claim that his health care plan covers pre-existing conditions applies only to people who already have health insurance and can somehow manage to afford to keep it after losing their jobs. But Obama, who seemed lost that night, didn't bother challenging Mitt on that or just about anything else.

So what happened? Al Gore, always trying to be helpful, put on his environmental thinking cap and blamed Obama's poor performance on Denver's altitude. (Really.) James Carville wondered if Obama just simply didn't want to be there. Some blamed moderator Jim Lehrer for letting the whole thing get out of control. (Perhaps Lehrer's losing his touch; he's been moderating these debates since the Lincoln/Douglas era.) But we at the Lester & Charlie Institute of Forward Thinking wonder if the answer to Obama's uncharacteristic performance lies somewhere deeper. After all, this is the same Obama who was cool and hilarious at the White House Correspondents' Dinner the same night the Navy SEALs were carrying out a secret mission to kill Osama bin Laden.

So how did it happen that Obama let Mitt run away with the whole thing? Did the Koch brothers make Obama an offer he couldn't refuse? Or maybe, like us, was Obama just listening closely to Romney and waiting for the laugh track? Or was something more calculated going on? Whatever it may be, we need your help! What's the real reason Obama performed so poorly in the first presidential debate? What do YOU think?

Want to find out what people wrote in? Subscribe to the Lester & Charlie Newsletter!