Lalo Alcaraz is one busy Chicano.

Many of us know him as the cartoonist-creator of the syndicated daily comic strip, La Cucaracha, where Alcaraz skewers bigotry and intolerance with a heavy dose of Chicano culture and humor. He is also a team member of the Pixar film COCO, consulting on the Día de Los Muertos-themed animated movie scheduled for release in 2017. Alcaraz has won five Southern California Press Awards for Best Editorial Cartoon, produced editorial cartoons for the LA Weekly for almost two decades, and creates nationally syndicated editorial cartoons in English and Spanish.

And let's not forget the books which include the 2014 New York Times bestseller A Most Imperfect Union (an illustrated United States history book written with Ilan Stavans), and Latino USA: A Cartoon History, 15th Anniversary Edition (2013).

Alcaraz, who has degrees from San Diego State University and UC Berkeley, is also "Jefe-in-Chief" of the satirical website Pocho.com, and co-host of KPFK Radio's satirical talk show, The Pocho Hour of Power, heard Fridays at 4 p.m. in Los Angeles on 90.7 FM. He recently taught illustration at the prestigious Otis College of Fine Art & Design in Los Angeles.

So, let's see... newspapers, books, the internet, radio, film, teaching... some people would retire at this point. But not Alcaraz.

His latest project is as a consulting producer and writer at Fox Television's animated show, Bordertown, which debuts January 3 at 9:30 p.m. (8:30 central) following Family Guy. It was created by Mark Hentemann and includes as an executive producer none other than Seth MacFarlane.

The creative team also includes award-winning journalist and editor of the OC Weekly, Gustavo Arellano, as a consulting producer who is perhaps best known for his "Ask a Mexican" nationally syndicated column.

Alcaraz kindly agreed to take time from his very busy schedule to answer a few questions about Bordertown. 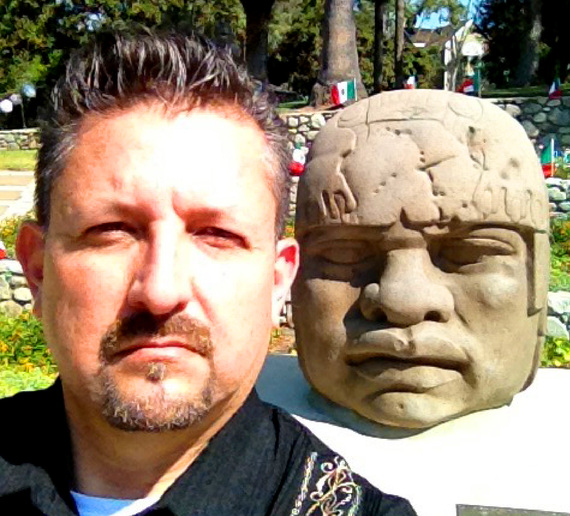 Though there's been a lot of press about Bordertown, could you give a quick rundown for the uninitiated?

ALCARAZ: Bordertown is an animated comedy about two neighboring families, each headed respectively by boneheaded Border Patrol agent Bud Buckwald and the optimistic and successful Mexican immigrant Ernesto Gonzalez. The show is set in a fictional border city, Mexifornia, and although it is set on the U.S./Mexico border, it's mainly about the demographic changes in the U.S. Think All in the Family on the border.

Bud feels confused and adrift, and can't figure out if there's still a place for a white guy in the increasingly browner U.S. Meanwhile, Ernesto is living the American Dream due to his Mexican immigrant work ethic and his sunny outlook on life. The show spoofs racism and xenophobia. 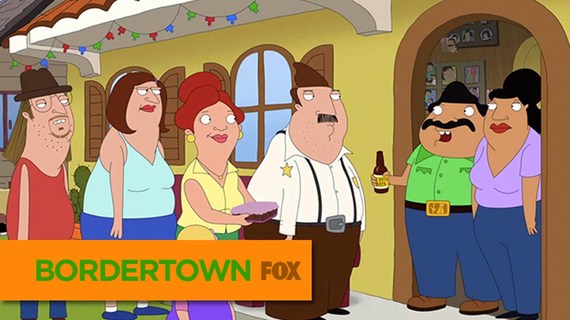 How did you develop the look of the characters and were there any pitfalls or concerns you had during that process?

ALCARAZ: Bordertown does have a huge cast of characters. The show's creator Mark Hentemann did the initial sketches of the characters, and a team of badass animation artists at Bento Box did the final designs. Character designers fill in other background characters by mimicking the style of the show's creator. I loved the look of all of the characters, especially the Mexican characters. I had some design suggestions for a few of them, like turning a mustache into a soul patch on the face of one young male character, and I suggested changing J.C. Gonzalez, Ernesto's preachy college educated nephew, into a radical MEChista Chipster (Chicano Hipster) but that didn't fly.

Gustavo Arellano pointed out that after the animation came back from South Korea, the Mexican characters were all the exact same tone of brown. This is not what happens in your typical Mexican family, so the artists addressed it, and gave a variety of tones to the Mexican and Mexican-American characters.

To be clear, as people assume since I am a cartoonist, that I did the artwork, but I did not draw anything for the show; my job is Consulting Producer and writer on the show. I do draw jokes out if they are visual, but that's just for the Writer's Room. 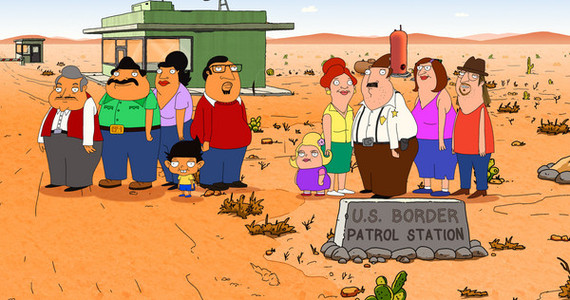 What do you hope viewers get from Bordertown?

ALCARAZ: I hope people enjoy and appreciate the spoofing of the Border Patrol, and our broken immigration system, not to mention society in general, but mainly I hope we get to write even more Mexican family stories in the future. My favorite moments in Bordertown are both the political satire storylines, and also the Mexican family stories and bits we get to do. This is what differentiates this show from tired Latino-esque sitcoms or non-diverse animated shows. We get to tell these stories and talk about meaningful current issues at the same time.

I want everyone to know that we have a (probably) world record FIVE Latino writers on the show's staff. This is unlike anywhere else in Hollywood. Our show features authentic bits of cultura, ranging from chants ("Ala Bim, Ala Bom, Ala Bim Bom Bam!"), weaponry like the dreaded Chancla, and even a discussion about pochismo. And I want young writers and artists to know that they are just as capable as the next person to write or draw for shows like Bordertown, it's not impossible!