One thing that I have never understood about Los Angeles is the lack of public transportation. After living in Europe and traveling to a significant number of metropolis areas in the states, I could not wrap my head around why Los Angeles wasn't keeping up. Especially considering the population's obsession with fitness - why does nobody walk in LA?

I fell in love with Los Angeles three years ago during a quick business trip. The main catalyst for my immediate infatuation was the diversity that the city offers; moving between neighborhoods was like traveling between cities. Six months later I had settled in my two-bedroom in Silverlake and became obsessed with devouring everything that each neighborhood had to offer, as well as the history behind each neighborhood.

My interest led me to start asking questions about the city's history of public transportation. I mean, I had seen photos and evidence of railway systems around the city. So, what happened to them? When did it become almost a requirement to own a car in Los Angeles? And what was the catalyst?

Rumors circulate of the oil and tire companies purchasing the transit systems in order to shut them down and push the country towards dependence on automobiles. Through my research, I've found that this may have pushed the issue but it definitely wasn't the defining reason for the downfall. Wikipedia sites a combination of economic, social, and political factors, combined with rapid population growth, for the eventual death of the transit systems of the early 1900s.

Over a 10-year span, the number of cars registered in L.A. County increased from 161,846 cars in 1920 to 806,264 in 1930. The number of gas stations during the same time frame increased from 150 to 1700. As the number of automobiles increased, the city began directing funding towards building roads and freeway infrastructure over public transportation.

Thus, our present day Los Angeles was born. A city where you must own a car to survive. A city where no matter the hour, the streets are packed with cars. For example, I live near the 101 freeway and it is notorious for constant stop-and-go traffic even at midnight on a random weeknight. 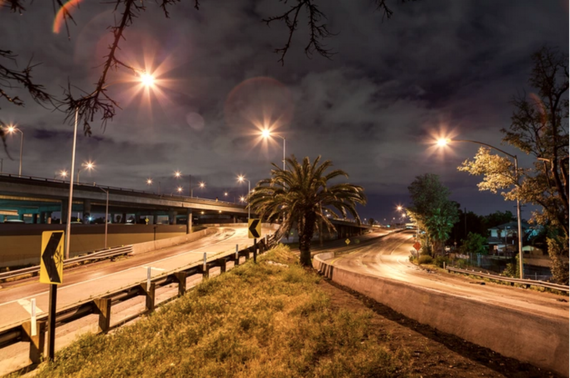 When I came across the photo series Nobody Walks in LA, I was speechless. Photographer Alex Scott spent two years capturing photographs of a completely deserted city for a project that was 10 years in the making. Scott is a Los Angeles native who found his inspiration driving North on the 101 freeway in 2005:

I liked the architecture of the overpass and wanted to find a way to photograph it. My immediate thought was the impossibility of the shot. I would have needed to be on the freeway without cars. I kept it in the back of my mind and continued to see scenes that I wanted to photograph, but couldn't shake the idea of it being impossible.

One day, Scott decided to make it possible. He began exploring the city in the middle of the night, yet still faced the problem of cars on the road. Scott would wait and wait for gaps between the cars to venture out onto the freeways to get his shot.

I would usually only have about five seconds to get into position, compose my shot, focus, and snap the photo. It raised the intensity of photography for me and pushed me to learn a lot quickly.

Sometimes he would wait all night and not get any opportunities for the shot. Other times, he would get the shot, but his dissatisfaction with the image would push him to go back to the same spot time and time again to capture his exact vision. He climbed rusty fences, slipped down oily embankments, dodged cops, even rescued a kitten in his quest to photograph a sleeping Los Angeles.

I hear a lot of people in Los Angeles complain about the environment. People sit in their cars, battling constant traffic, and they end up hating the space around them. My goal was to share my perspective and provide a reminder of the beauty around the city. A friend recently told me that Nobody Walks in LA had restored his love for the city. That was the biggest compliment I could have ever received.

Scott is starting to share the photo series with the world. He recently launched a Kickstarter campaign that will allow supporters access to the first printing of a coffee-table book, as well as prints. Scott will also host a release party and art exhibit in Los Angeles upon the successful funding. And yes, he'll be driving to the party, "It just seems normal to drive everywhere. I would feel naked if I went somewhere without a car."