Peyton Goddard and her mother, Dianne Goddard, wrote the book I Am Intelligent with Carol Cujec, Ph.D. It is a memoir: the story of a non-speaking autistic child thought to be severely "mentally retarded" who, as an adult at the age of 22, typed, "i am intlgent."

I asked Peyton and Dianne if I could interview them. This is the beginning of an ongoing interview we are in the process of conducting.

AZ: You have written a book together called I Am Intelligent. When did you start writing it?

Peyton: Pertinent words flowed in lists in my provocated, terrorized, gored youth where hope of rest was elusive. I opted to tease my terrors by writing in my head what I very feasibly feared would forever remain unsaid. It was perpetual purgatory, as I'm an understated opportunity beset by abusers erroring I everywhere. It muted I; it readied I freed to kiss death. Yet the words I wrote in my mind offered a pesty perfect peace. Would my writing ever be heard?

It was typing that saved me 15 years ago. The wretched, wrenching, sad, feasible-heard-never, pounded years in my head I told by typing. There tears dearing "yes I'm worth" could be released. I here say I pecked for 30 years, ultimately trying to teach "each person is to be treasured." Merry I greet my book.

Dianne: At the turn of the millennium, in a session with Dr. Friedman following Peyton's first revelation to us of the family abuse, Pat and I listened, totally surprised as Peyton asked him to help her write a book to help the kids, telling him, "I lived a life I'll never want anyone to teach as acceptable for any human being." Friedman's affirmative answer was both thoughtful and enthusiastic. However, the more focused Peyton became on writing the book, the more Pat and I were concerned about how we could support her in her quest. Then in 2007 we met Dr. Carol Cujec, a freelance writer, and the collaboration began. Soon after, I became the accidental writer at Peyton's request. I now see Peyton needed my reality interwoven with her very different reality in order for readers to understand her poignant messages.

AZ: The abuse you refer to is described in the book. What I found astonishing was the absence of rage expressed by either of you with those who abused. Can you discuss that process?

Peyton: Pity wedded poignant fears of attackers petrified me for 20 years. Their hassling, hated deeds heated me red, paralyzing me in fear even as I struck out hitting unknowing others. I wept to be freed from toppling tortures. Rest was impossibility. Abusers greedy to hear my heart-breathed fears treed me like an animal, depth distressing me. There I'm tuned to red emotions I estimated be freed from never. The red powered me rassled in terror to fry in gulping hell. Popping in pity I utter hung, poisoned by feeling I'm gum in gutter. I yearn to tip death. Ethers point to rest only by greedy I'm to die.

Wedded to typing, wepting for rest, I geared up to truth tears tell. I truth told, but rash rages still tried me. I'm hung up by messed memories of replying to ogres who poked me with retaliation. But in my rages of anger hungry for revenge, my red only grew. My tears stretching to testy, I saw my poking back in hatred rendered outing my red impossible. My estimates to hurt them only hurt me more.

I'm pointed to kind. I lined up my awed answered averted abusers one by one, and told them I understanded. I reasoned they hurt me to ease their own hurts. I understood they were like me, thinking their red hurts could be kissed away by hitting others. I'm years try I'm rid torturers, until I see they affect me ill by my red anger to them. There I let them go, one by one, there gyred no longer by their poison. I'm rest lured finally, greeting pointed to peace. It is joy. Estimate I that red in this pesty world is because pierced persons think hurting others will strip their own hurts away. Revenge hurts most the person storing it.

Dianne: Peyton was 23 years old when she bravely told us about a school employee who had molested her 10 years prior. Then, two years later, she began to reveal the ongoing torture she had suffered at the hands of her cousins. With that upending news came a request for us not to go to revenge or retaliation. "I need you to help me heal," was her plea. And I honored that, though the truths wore heavily on me, and my mind at times slipped into waters of hate and wishes of ill will for the perpetrators. I chose this path not out of any personal nobility or enlightened compassion on my part. Peyton was an adult, not just in years but in respect I had for her. Her trusting me with her truths was a sacred gift, and I had to trust her in knowing the best path to her own healing. Looking back, I see how well she knew me. Giving me a task to stay positive helped me continue to say "no" to my negative thoughts as she and I were already "clip-climbing," as she says, out of the dark valley where we had so long resided, up toward the summit. 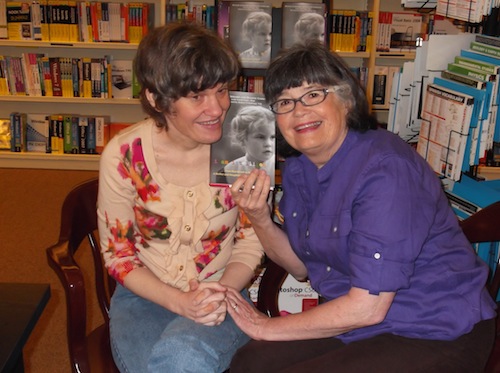 Peyton and Dianne Goddard at a book signing