We've been disproportionately interested in North Korea since reading 'The Orphan Master's Son', wondering how we'd fare in a prison mine. Actually our fascination predates the Pulitzer Prize novel, going back to the early 1990s when Kim Jong il shot his 38 under, aided by the fact he didn't need to stop in the restroom at the turn.
So when the Hermit Kingdom was in the news recently we took the opportunity to ask some questions via Fat Finger, our daily polling app. This from January 7th :

Earlier in the week North Korea conducted a nuclear weapons test, its fourth (its first was in 2006). North Korea says it was a hydrogen (fusion) bomb, while the West believes it to have been a fission device, which is far less destructive. Still the yield is estimated to be 10 kilotons, about the same size as the bombs dropped on Japan by the US, and 50% more powerful than North Korea's most recent test one year ago. Which administration do you blame most for North Korea having the bomb? (Korea was partitioned in 1945, at the conclusion of WWII, a communist North and a capitalist South.) 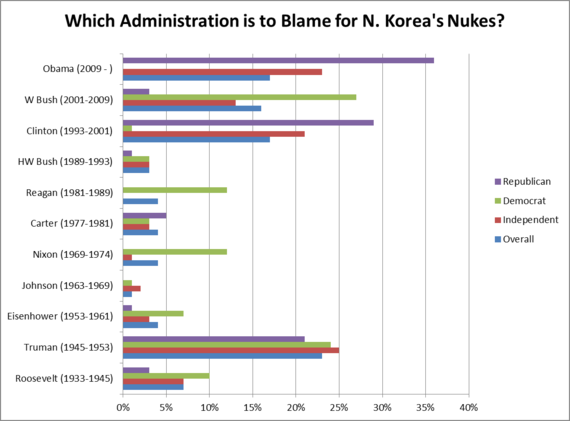 As you might expect, Republicans blamed Obama and Democrats blamed W. But what about Independents? Turns out that they agreed that Obama's administration, which took office two years after the North's first test, is to blame, putting him in a tie for first among Independents--along with Clinton and Truman.

In 1994 the CIA reported to Clinton that North Korea had built nuclear warheads. Clinton sent Carter to negotiate a deal that gave Kim Jong Il two nuclear reactors and aid money in return for a promise to cease and desist with weapons.

For his part Truman green lighted Fat Man and Little Boy, and presided over the Korean war--also solid credentials for responsibility for a nuclear North.

Meanwhile FDR, the president most hold responsible for the WWII era communist/capitalist partitions from Berlin to Korea, for better or worse, received less than 1/3 the votes (among Independents) of Truman, Clinton and Obama.

W, who was in office for the first Korean test detonation, received half the Independent votes of the leaders.

And Reagan, the president in office when North Korea acquired its nuclear program from the Soviet Union in the 1980s received 0% of the independent vote.

Pushing our luck, we followed that up with another Korean question the next day:

North Korea is located between South Korea, home to nearly 30,000 US troops, and China. China wants a 'friendly' North Korea as a physical buttress to the US and therefore props up the regime with money, food, and arms. This alliance creates difficulty for China at times, given the frequently erratic and menacing behavior of the North Korean regime. Do you think China will eventually forsake North Korea (within the next 20 years) given the headaches the alliance causes for China when it comes to being accepted by the rest of the world as an international force for good? 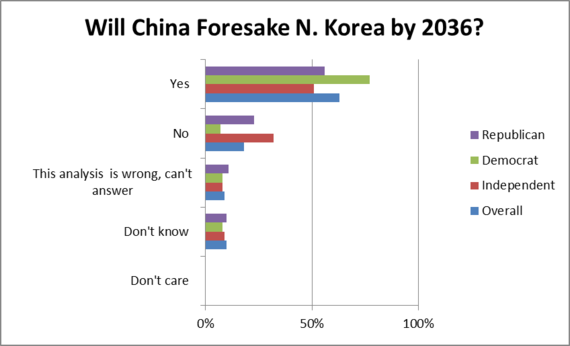 Here it was somewhat surprising to us that a majority of people of every political stripe thought China would ultimately give North Korea the high hat.
We don't think they will, since in this world, if you are rich enough you can do what you like. Over the last 20 years everyone from Rupert Murdoch to David Cameron
has kowtowed to China in the hope of cashing in on the Chinese boom. And that won't change just because China supports North Korea, no matter what the North does next. But if China do abandon their ally let's hope Kim Jong Un inherited talents in addition to golf or 26mm people will be nostalgic for the days of one meal a day in the prison mine.