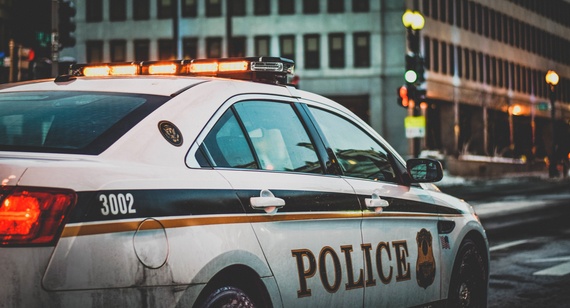 Being a cop is, without doubt or debate, one of the most difficult and challenging jobs a person can have. It requires deep understanding of the law, physical strength and fitness, an impeccable set of reflexes; knowledge of and facility with firearms, and the wisdom to grasp, assess, and ascertain what myriad encounters require for maximum success... meaning, when to shoot and when not to.

We've all seen that "training test" in movies and TV; the one where law enforcement personnel move slowly through a mocked-up set as pop-up figures suddenly appear, demanding that the "testee" judge -- with split-second timing -- whether to pull their trigger or pause to, say, let an old lady toss her cat out a door. Having sharp reflexes, astute ability, and the appropriate experiential knowledge and training to quickly make that assessment, correctly adjust to potential threats and personal fear, is an essential element of being a good cop. A wise cop. A rational, ethical, qualified, unbiased, open-minded, successful cop.

We're seeing a lot of "unsuccessful" cops these days. A lot of unwise cops. A lot of hair-trigger, fear-based, potentially biased and too often fatally reactionary cops whose bad decisions have resulted in the deaths of a disproportionate number of black men.

But, oh, apologists holler, what about the many thousands of good cops, and good encounters that happen every day? The ones no one knows about or shares about on social media? The smart, wise, compassionate cops who make their stops, walk their beats, engage with their communities without anyone being harassed, bullied, beaten or shot? Good cops who make friends, jump rope with kids, give talks at schools, and help pregnant women deliver babies? What about those?

We are grateful for those cops. Truly and deeply. But those actions should not stand out. They should not be applauded as "good anomalies." They should be what every cop does every day, not the exception. Those good, compassionate, friendly cops and their thoughtful, respectful actions should be the norm, should be what any man or woman of any race, creed, or color encounters if and when they have reason to engage with a cop. Whether it's a traffic stop, a neighborhood scuffle, a domestic issue, commission of a crime, or just a walk down a city street, an encounter with a cop should inspire something amongst the options of respect, deference, relief, assurance, a sense of protection, or at least an acknowledgement of authority... not panic, terror, and fear of imminent death.

But it's not the norm. Not even close. Blacks disproportionately find their encounters with police to be rife with racial profiling, the presumption of guilt (i.e., Walter Scott), disproportionate aggression (i.e., Eric Garner), inappropriate escalation (i.e., Sandra Bland), lack of concern for physical safety (i.e., Freddie Gray), and, most recently, on-the-spot executions (i.e, Alton Sterling and Philando Castile).

But, oh, the apologists continue, those were isolated cases where the people involved got belligerent, or resisted arrest, or didn't lay down, or reached for their license, or in some way didn't do what they were supposed to do, dammit!!

Or maybe, were just black.

Don't think so? See this from Vox: 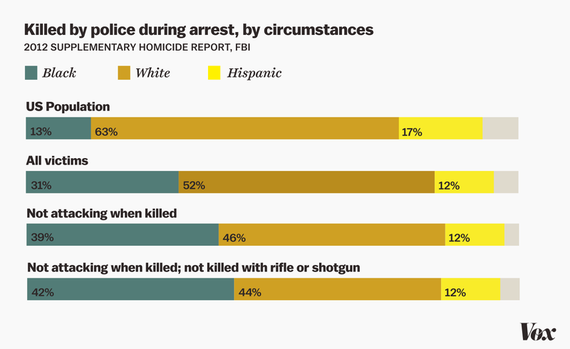 An analysis of the available FBI data by Vox's Dara Lind shows that US police kill black people at disproportionate rates: They accounted for 31 percent of police killing victims in 2012, even though they made up just 13 percent of the US population. Although the data is incomplete, since it's based on voluntary reports from police agencies around the country, it highlights the vast disparities in how police use force.

Black teens were 21 times as likely as white teens to be shot and killed by police between 2010 and 2012, according to a ProPublica analysis of the FBI data. ProPublica's Ryan Gabrielson, Ryann Grochowski Jones, and Eric Sagara reported: "One way of appreciating that stark disparity, ProPublica's analysis shows, is to calculate how many more whites over those three years would have had to have been killed for them to have been at equal risk. The number is jarring -- 185, more than one per week."

The issues at play in this repugnant scenario include a toxic stew of over-zealous police work, poorly trained officers, a culture within law enforcement of racial prejudice and animus, and a predisposition in the black community -- engendered and fomented by years of the above -- to distrust, disdain and outright fear police. Fear for their very lives.

When we see videos like those of Alton Sterling's and Philandro Castile's deaths-by-cop, we are sickened, revolted, angry, and in desperate need of answers. "What can be done??" we wonder. "When will this stop?" This deadly trend has gone on for so long, it's become impossible to believe that police departments can correct the problems on their own; it seems time for the Department of Justice to get involved to better train, better discipline, and better assess every single police officer in the United States. Because this maxim is true:

NOT EVERY COP HAS THE APTITUDE TO BE A GOOD COP.

What seems evident in the two most recent cases is cops reacting to fear. Their own fear for their own lives. With so much fear, so much panic, they over-react by shooting to kill, without thought to any other de-escalation methods or weapons. Those cops would fail the mock-up test discussed above. They would be the ones to shoot the old lady with the cat. They're so afraid for their own lives they'd shoot a man, point blank, in his chest, while he's lying prone on the street. Or put four bullets in him while he's sitting in his car, his little girl in the back seat, as he reaches for the license he was asked to produce.

FEAR. If cops react from a place of disproportionate fear to cause the unwarranted death of another person, they do not have the aptitude to be good cops. Even if legal prosecution is somehow avoided, they should be removed from the force and made ineligible from serving in law enforcement in any capacity.

Beyond fear, what seems evident in other cases is a mix of racial bias, the entitlement of being above the law, a willingness to use their position of authority to justify bullying and harassment, even shooting a fleeing man in the back, or falsely placing a weapon near a victim. When those traits are involved, beyond the lack of aptitude, cops are criminals themselves and should be ineligible for any job in law enforcement, regardless of the results of subsequent prosecution.

We live in a country that has a very arbitrary sense of what should or should not be regulated, what does or does not demand training or retraining, what requires checks and balances, and what is just allowed. We make getting abortions a matter of political debate but refuse to see the wisdom of universal background checks on guns. We demand on-road tests and written exams for drivers, but see no problem in people of any bias or intellect raising children, our future generations, without training. We want our plumbers, our electricians, lawyers and teachers, to have degrees and certifications, but we'll hand our children to a neighborhood babysitter for $8.00/an hour...

And we give power to, and rely on, the protection of police officers who literally have our lives in their hands, and yet we know nothing about their prejudices, their worldviews, or the degree of their compassion and overall humanity. We have to accept at face-value the depth of their training, their skills and reflex abilities, and we allow them to carry weapons they can point and shoot without knowledge of their aptitude to be judicious about that power. Which means when people get stopped by a cop, they simply cannot know what will happen. Whether they'll get a warning or an actual ticket that requires a court appearance or hefty fee. Whether that cop will ask for their license and registration, respectfully inform them of the problem, or just mention the taillight and move on. Whether saying all the right things will keep the officer calm, or whether something will trigger a snap and the situation will escalate. And if a black person is involved, they don't know if that cop will tase them in the car, drag them to the curb, beat them with a nightstick, or shoot them in the chest till dead.

And if people don't know which of those things will happen, what kind of cop they'll encounter, if that cop has the right aptitude to deal with the situation, or if his bias, his fear, or his prejudice is driving his actions, it literally becomes a life and death matter. That should not be the way any civilian feels about the cops their taxes pay to "serve and protect" them.

Police forces, government entities, the Department of Justice, whoever, whatever, all need to step in and get involved to change the culture, raise the bar, ferret out those amongst the ranks of police who do not have the mental state, the emotional capacity, the appropriate training, the proper reflexes, the strength of compassion, or the essential aptitudes to do well the dangerous, demanding, necessary, appreciated, and community-based job of being a good police officer.

Until that happens, being stopped by the police will continue to be a disproportionate matter of life and death for our black citizens. That is not acceptable.

Photograph by Matt Povovich at Unsplash