It's easy to walk through Manhattan today and be despondent. Passing by all the banks and drug stores and chain stores that occupy the spaces where your favorite bars, clubs, boutiques, and restaurants used to be it's easy to draw the conclusion that everything you came to New York for, everything that made it incredible, is gone.

But the fact is that it's not all gone. There are a few treasures that have held on. I have a small roster of independently owned businesses that I have patronized for 10 to 20 years that still exist and are each, in their own way, incredible and a little piece of New York that's left. Like iconic Chelsea businesses I've written about before - such as the world-renowned men's clothing boutique Camouflage on 8th avenue (now a Subway sandwich and Verizon store) and Alan's Alley Video (which is still vacant two years after eviction) -- each one has been essential to my New York experience.

These business that I feature here -- as well as others I will feature in future installments -- are pillars that are holding what remains of New York up. Here are the first four of my favorites: 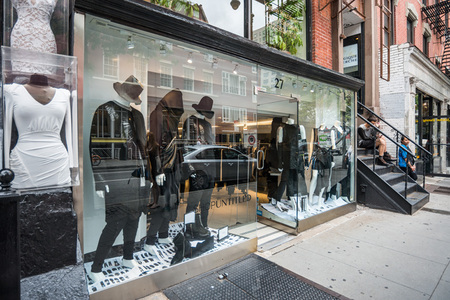 I was introduced to Untitled when I first arrived in the city in 1995 by an aging male model I knew who had been around the block and was showing me the city's ropes. Having just moved from the provinces, first on the list was teaching me how to dress like a New Yorker, and the very first boutique he brought me to was Untitled. Opened in 1984 by style wizards Kevin Kelly and Gapu Suri, Untitled is where I learned what underground New York high fashion is... and how to be high fashion without being commercial.

At the time Untitled was located in a small two-story townhouse on 8th street (men's upstairs, women's downstairs) with negligible signage - you pretty much had to know it was there. Going inside was like opening the door to the Wizard of Oz's walk-in closet, and over the next few years Rodney - the uber-chic men's salesman - put me in shimmery futuristic olive green Helmut Lang pants, a diaphanous long-sleeved Dolce & Gabbana mesh top, and a rubber Jil Sander winter jacket... nary a label in sight, and which you walked out within an all-black unmarked bag. Let's just say decked out in Untitled that I had cleansed myself of all traces of the turnip truck. (And I can put on any of those garments today and still look ahead of the curve.) 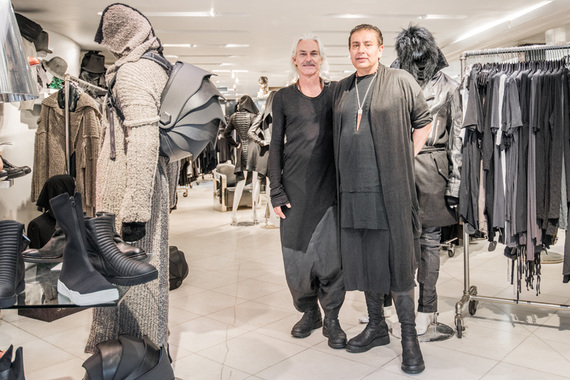 Peek into the Wizard's walk-in closet and there you will find Kevin Kelly and Gapu Suri ready to deck you out for Oz. (Photo courtesy Manhattan Sideways.)

Miraculously, Untitled is still there. Although in a new location across from Macdougal with a glass façade for the world to see, Untitled is as insider avant-garde high street fashion as it ever was. I treat myself to one Untitled outfit a year - the latest a white knee-length Drifter sleeveless t-shirt and black Skingraft tribe panel shorts with silken flaps designed with what look like shark jawbones. And whenever I wear that outfit, anyone not looking at their device looks at me. 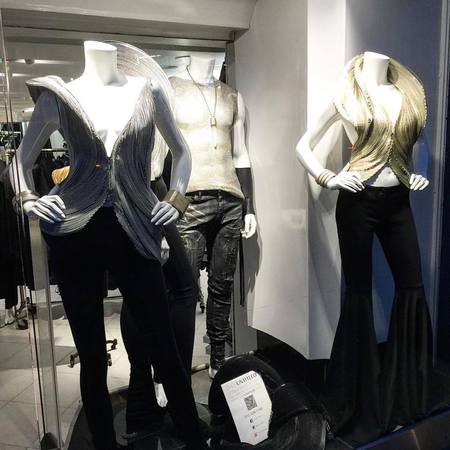 When you shop at Untitled you can be damn sure nobody is going to think you shopped at H&M.

As for the statement wearing Untitled makes, let me put it this way: whenever I want to look like I could sneak onto the red carpet at the Grammys and have nobody question me - or simply feel like a red carpet follows me wherever I go - I slip into Untilted. 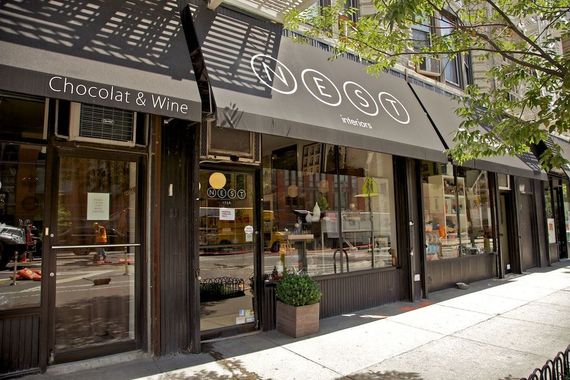 Nest Interiors opened around the corner from my apartment in 2004 and was, by my reckoning, one of the last vendors to open in Chelsea that actually understood the neighborhood and added to it.

And boy did they add. Owned by interior design savants Lana Sexton and Henry Stozek, Nest specializes in contemporary and vintage home furnishings and art that I would generally categorize as high-end mid-century hedonism. Their specific vision in the store morphs regularly - walking into their boutique might feel like Auntie Mame's '30s art deco penthouse, Rock Hudson's Malibu beach house in the 1950s, the VIP lounge at Studio 54 where you're having cocktails with Cher and Liza, or Dudley Moore's LA mansion in 10 - but it is always spectacular, a pure pleasure to the senses, and unapologetically decadent. 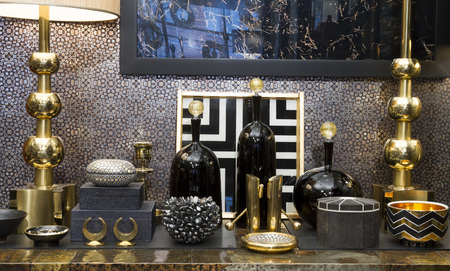 The best way to describe Nest is pure decadence, and there is absolutely no other interiors store in New York that can match Henry Stozek and Lana Sexton's eye for it. 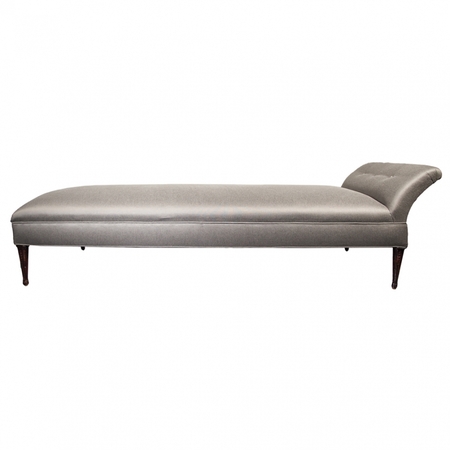 If you're looking for an authentic mid-century chaise lounge - such as this 1940s Hollywood Regency with carved wood legs - Nest is the place to go, which is why Lana and Henry are in constant demand with set designers to create authentic period interiors for photo shoots and films.

Buying at Nest can be an investment, but unlike, say, a piece of mass produced crap from a chain store which lasts approximately a year, what you get at Nest you have for life...not to mention that Nest's furnishings actually increase in value over time. And Henry and Lana make sure to always have an array of affordable fabulosities, or what they refer to as "yummies". I bought my first set of amber Sean Connery-esque rocks glasses (hand made by some mysterious artist in Mexico) in 2004 for $100 which are so fabulous that I can serve a VIP a cocktail in one and make them totally forget that they're in a rent stabilized apartment. You can also find treasures on sale - in 2008 I bought a classic 1960s era olive / mint green genie-in-a-bottle lamp for $175, which I got along with the back story that it was owned by a wealthy Upper East Side socialite who smoked Pall Mall's and drank brandy. You don't get that at West Elm.

In a nutshell, Lana and Henry would be my interior designers in heaven, and even just one item from Nest in your apartment can make it feel like that's just where you are. 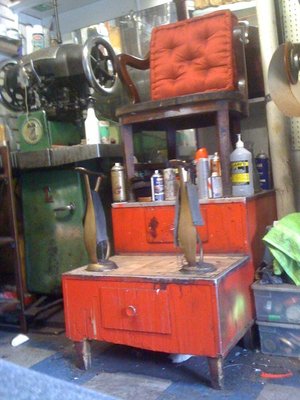 I stumbled on Arty's back in the '90s when I had that very first grown-up experience of wearing out a pair of boots I was in love with, not being able to find a replacement, and choosing to have them refurbished instead. Back when Chelsea's commercial life was intended for people who lived there (not tourists) you couldn't sling a dead cat without finding exactly what you needed, and the best there was.

Arty's fit into both categories, which I discovered when my boots came back better than new, with new cleats and soles made to endure twirling on the dance floor at Twilo, walking into meetings with editors at magazines, and marching all over Manhattan's sidewalks. Over the decades, Arty has similarly maintained my favorite pair of Italian dress shoes that I bought from Giraudon in 2002 as if they just came out of the box, restored my 30-year-old Coach briefcase bequeathed to me by my mother, and even installed stronger Velcro straps on my rollerblades. 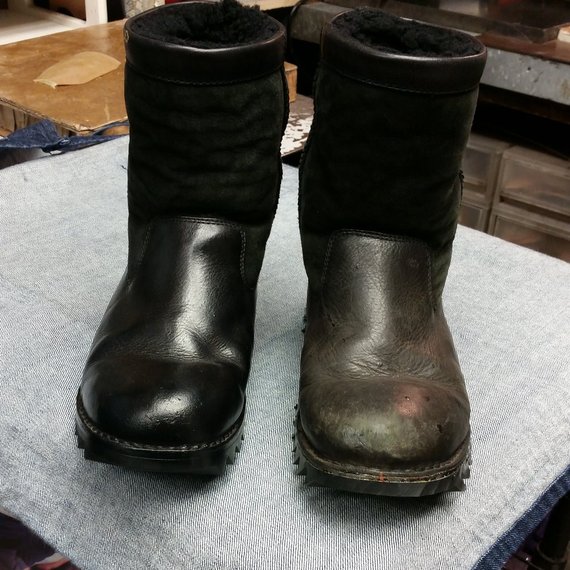 Boots after Arty, boots before. Say no more.

And Arty's itself is completely old school - it looks, smells, sounds and feels like any cobbler would have at any time in New York in the last 100 years, complete with the powerful aroma of leather, shoe polish and chemicals, loud European cobblers loudly hammering away at heels behind the counter, and a shoeshine station. 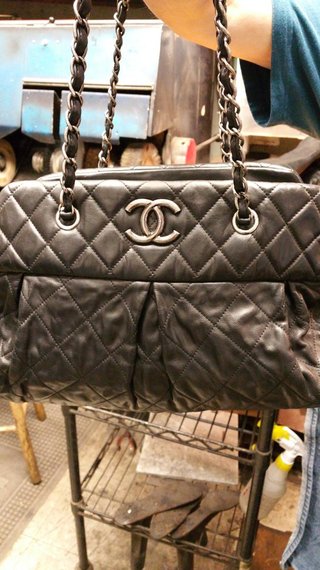 When your authentic Chanel bag wears out you don't buy a new one. You bring it to Arty to make it better than new.

The acid test that Arty's is the sh*t? You will regularly catch high fashion glossy magazine editors sashaying into Arty's to ask for an audience with the master about repairing their Nicholas Kirkwood pumps before heading off to Conde Nast. (And to that point, Arty's has been written about in major glossies, including Vogue.) As if that isn't enough, Arty is a real gentleman and old school New Yorker - the kind of New Yorker that if I were on the run for some reason I could run into the store and he would hide me, and ask questions later. Case closed - Arty's is the bomb.

As Manhattan has become more and more of a Potemkin Village for tourists, real estate investors and banks and less a city for people who live here, it's becoming increasingly difficult to find basic services. To wit, every time a laundry mat, deli, butcher or hardware store closes in Chelsea I feel more like I'm trying to live in an airport mall. After all, you can't survive on Slurpees and Subway Sandwiches. ... Well, a New Yorker can't.

All of this boils down to the human touch a locally owned business will provide its customers and which a chain simply can and will not. Going to a profit-first dental chain with corporate headquarters in Boise where you never see the same dentist twice will not get you the same results that I have gotten from Dr. Ellis who lives around the corner from her practice and sees the same patients over the duration of years. And then there is the fact that you can't have your teeth cleaned at Pinkberry.