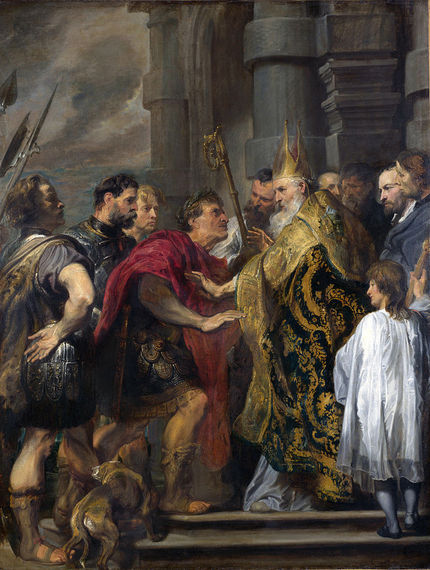 Where once Thy churches prayed and sang
Thy foes profanely rage...

In the year 390 the populace of Thessalonica rose up in revolt against the local Roman authorities to protest the arrest of a popular charioteer. The Roman emperor Theodosius, known for his thin skin and quick temper, was swift to respond. He sent a letter ordering troops to punish the inhabitants, which they did by means of a terrible ruse. They invited the whole town to attend a special sporting event. Once the stadium was packed, the soldiers locked the exits and slaughtered the entire crowd. The notoriously erratic Theodosius, meanwhile, had cooled off and changed his mind, sending another letter to contradict his original order, but it was too late. Seven thousand Thessalonicans were already dead.

Bishop Ambrose of Milan, where the emperor had his official residence, condemned the massacre, refusing to say mass in the presence of Theodosius until he repented his crime. Van Dyck's painting (above) depicts the bishop barring the emperor from entering the cathedral. It was an unprecedented example of the Church speaking truth to power.

Sadly, there will be no bishop to bar the Father of Lies and his minions from the National Cathedral in Washington on January 21st. The inaugural prayer service, a tradition since FDR's inauguration in 1933, will go on as usual despite fierce protests from the many Episcopalians who regard such normalization of the president-elect to be at best a foolish mistake and at worst a desecration of sacred space.

The local church authorities defend the decision by appealing to inclusivity: a church should be a place of welcome for all people, including notorious sinners and those with whom we disagree. But this ignores a critical distinction. The cathedral is not merely welcoming "everyone" (as long as they have secured a ticket of admission), it has allowed the Trump team to dictate the content and flavor of the service itself.

There will be no preaching, eliminating the risk of a prophetic word from the pulpit. And judging from everything the president-elect has said and done over the years, we may expect no prayers of repentance for racism, misogyny, or xenophobia, or petitions that God may frustrate the designs of evil tyrants. Trump is no more submitting to the norms of Christian worship than he is to the norms of our democracy. He is essentially renting the spectacular Gothic edifice to bathe his narcissistic persona in a faux-religious glow. To allow such a charade threatens the integrity of the cathedral's essential mission while abetting the anti-democratic authoritarianism of the president-elect.

The local bishop hopes that the inaugural prayer service will, at a time of intense national conflict, "offer a few moments of spiritual solace and the healing gift of transcendent beauty." As a priest, liturgist and artist, I am a great believer in the value and necessity of providing sacred space and time, where sin and strife are hushed and we may encounter the world of God, not only in our minds and hearts but also with our senses. However, that should not mean losing touch with the imperatives of justice and love. Worship isn't just to soothe and bless. It must also challenge, unsettle and transform.

When the Mormon Tabernacle Choir was invited to sing at the inauguration, at least one singer refused to participate. "It would be like throwing roses to Hitler," she said. The National Cathedral choir is not deterred by such qualms. They will also be lending their voices to Trump's ascension. As the cathedral dean explains, "We do not pray or sing to bless a political ideology or partisan agenda...We sing to honor the nation." But is it really the church's business to honor the nation?

The Episcopal Church traces its roots to a state church, the Church of England. And even in pluralistic America, the idea of having a "national cathedral" has preserved the aura of a privileged association with the political establishment. But the function of the cathedral, or any Christian assembly, is not to bless the status quo or national interests, but to proclaim and embody the gospel.

Instead of praying for the president as if the office earns him any special attention, let us pray for everyone in the world who wields power, that they may do no harm and nurture the common good. Let us pray not just for the leaders of the nations- and economies-of the world, but for the prophets who speak to power and the activists who work for change. Less elitism, more democracy in our prayer life. Less nationalism, more globalism as well. Such an expanded range of attention retains the Anglican commitment to engage public affairs rather than flee them, while rejecting the fiction of American exceptionalism.

Concurrent with the controversy over the inaugural prayer service is a lively debate over prayers for the president at any public worship. Are we praying for the man, the office, or good governance? For those of us who may be his victims, are we praying for an enemy? If so, what is the aim of such prayer? And if we mention him by name, do we risk polluting worship with a rush of negative associations?

All this bears close consideration, but it is not really pertinent to the question of whether the National Cathedral should host the inaugural prayer service, to which the answer should be an unequivocal no. It is one thing to pray for our enemies. It is quite another to let them dictate what happens within our sacred spaces. Bishop Ambrose regrets that he cannot attend on Saturday. Is there anyone who will take his place at the cathedral door?