President Barack Obama enjoyed a warm embrace with Supreme Court Justice Ruth Bader Ginsburg on Tuesday, as the commander in chief made his way into the House of Representatives to deliver the State of the Union address to a joint session of Congress. 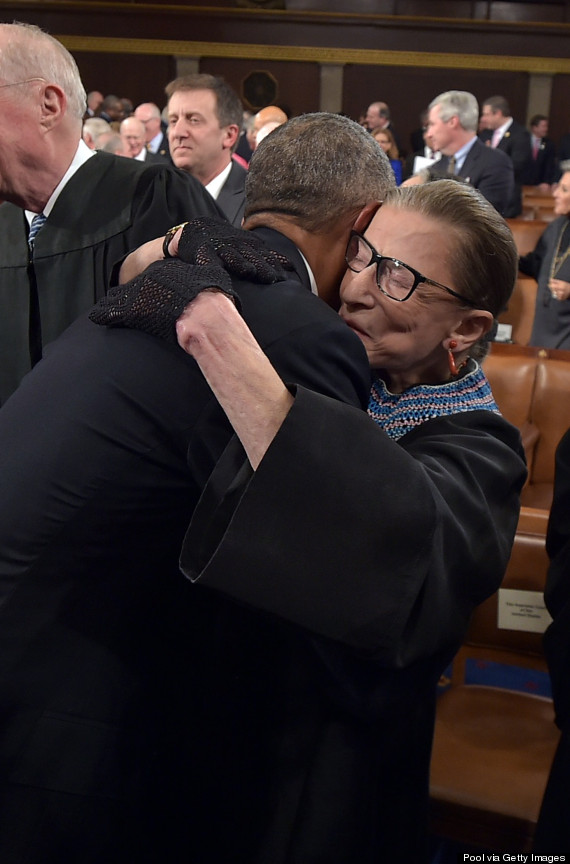 "She is one of my favorite people," Obama told The New Yorker in 2014, after the 81-year-old associate justice was rushed to the hospital with a blocked artery. Following her hospitalization, Ginsburg brushed aside suggestions that she step down from the bench while Obama is still in office. The president told the magazine at the time: "Life tenure means she gets to decide, not anybody else, when she chooses to go."

It's clear that the warm feelings are mutual between Ginsburg and Obama, who had a special bond even before he was elected president.

“When the Court had one of its occasional dinners for members of the Senate, Ginsburg asked that Obama be seated at her table," wrote Supreme Court expert Jeffrey Toobin.

Ginsburg has served on the Supreme Court since 1993, when she was appointed by then-President Bill Clinton. She is famous for her advocacy for women's rights, perhaps most notably her blistering dissent in the Hobby Lobby case, and her strong opposition to the court's Citizens United decision, which she said she wished she could overrule.

While Obama is evidently an admirer of Ginsburg, he has serious competition from some RBG fans who have taken their love for her to the next level.