President Obama's reelection was decisive in terms of electoral votes, but the narrower result in the national popular vote has those on the left arguing that the president has a mandate, with those on the right saying he doesn't.

On its face, it seems an understandable debate. How people vote is presumed to be a reflection of where they stand policy-wise -- and the narrower the victory, the more divided the electorate appears on the question of how best to move the country forward.

But what if that presumption is off? According to Seth Stephens-Davidowitz, a Ph.D. candidate in Economics at Harvard, it is; and, as a result, we're drawing the wrong conclusions. Stephens-Davidowitz published a study in June indicating that an effect of racism -- in particular, the unwillingness of white Americans to vote for a black candidate because he's black -- significantly suppressed votes for Obama in 2008, and that it would likely do so again in 2012. In a very accessible piece in the New York Times, he explains his methodology and conclusions.

To try to assess this suppressing effect on November's election, I've used Stephens-Davidowitz's data and conclusions to produce a projection of a state-by-state vote count that "corrects" the 2012 electoral map to undo the effect of racism Stephens-Davidowitz describes. It essentially returns votes to Obama that went to Romney because the president was a black candidate. I'd argue that when it comes to evaluating the existence of a mandate, it's a better picture to use. 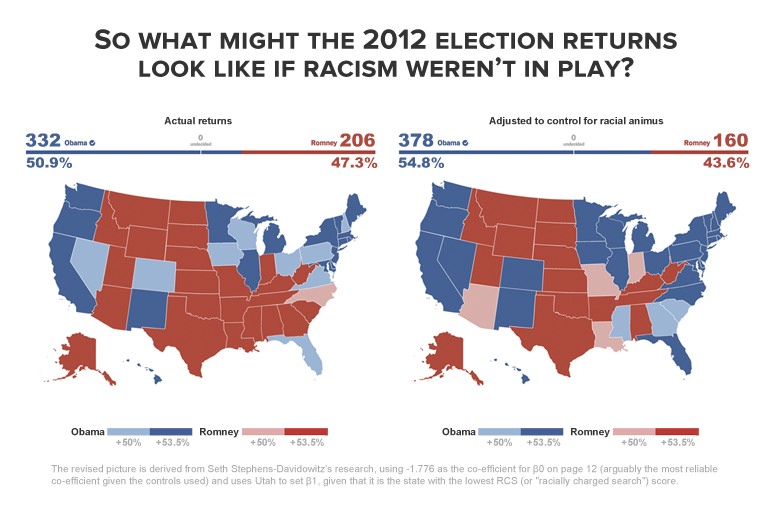 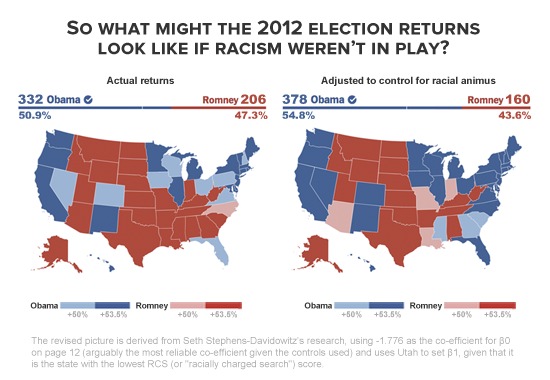 In the projection, Obama takes Georgia, North Carolina, South Carolina, and Mississippi from Romney. Arizona, Indiana, Louisiana, and Missouri enter swing territory. The electoral gap increases, the Deep South turns partly blue, but more pronounced is the split in the national popular vote. The gap between Obama and Romney moves from less than 3 percent to more than 11 percent.

Using media markets as an anchor, Stephens-Davidowitz uses the search density of the word "nigger" (searches for the term divided by search volume in general) from Google's Insights as a proxy for a geographic area's racial animus, developing a "racially charged search" factor. He then demonstrates the predictive value of the factor in accounting for the difference in support for the Democratic nominee across the 2004 and 2008 presidential election cycles on a media market by media market basis. Where racial animus is low (in media markets like Denver and states like Utah), the predicted results held true. Where it's high, Obama's performance was suppressed, and the suppression was predictable based on the "racially charged search" factor (Stephens-Davidowitz takes into account or controls for seemingly every variable that could affect the results, including the relevant popularity of Obama and the potential positive affect of Obama being black for some voters).

The data driving Stephens-Davidowitz's study pre-dates the Obama presidency, which might lead one to question if racial animus might have lessened since Obama has been in office. But that seems unlikely. The Southern Poverty Law Center reports that hate groups have increased in number and rank during Obama's tenure (after declining in the period before), an important indicator of racial animus. We saw Romney's campaign resort to race-baiting (which only works if there is significant racial animus in the electorate), lying to white voters with the claim that Obama had gone soft on welfare recipients in the runup to the election. And we saw white students rioting at Ole Miss on election night when Obama was declared the winner.

Perhaps most illuminating was the 2012 Democratic primary race in West Virginia in May. West Virginia has the highest "racially charged search" rate in the country, according to Stephens-Davidowitz's study, where 1 in 12 votes likely flipped from Obama to Romney due to racial animus. In that contest, a white convicted felon beat Obama in the primary in 10 counties, and won 40 percent of the vote across the state.

I'm not an economist or statistician, so I'm not qualified to do due diligence of Stephens-Davidowitz's work on a deep level, but I have yet to find any attempts to debunk his work or its conclusions. And the conclusions are similar to those from others, such as "Obama's Missed Landslide: A Racial Cost?," a study from Michael S. Lewis-Beck et al.

So what does it mean? A few things.

First, if Stephens-Davidowitz is right, were it not for racism in the electorate, 2008 and 2012 would have been landslides for President Obama.

And that matters. The picture on the left above (actual vote results) has a huge influence on how elites and policymakers in Washington act; it influences the media narrative; it influences public debate. At this very moment, Republicans are trying to play hardball on the issue of the "fiscal cliff," acting as if they represent the policy perspective of a substantial portion of American voters (even as polls indicate otherwise). The accepted idea that there is a major split among American voters help gives them the cover.

But if Stephens-Davidowitz is right, they're wrong. A read of an electoral map that eliminates the effect of racial animus (map on right) shows that when it comes to substance, the country aligns with Obama's policy agenda to a much larger degree. In terms of policy, it is clear that the President and Democratic leadership do have a mandate. And they have a responsibility to argue and act accordingly.

The importance of Stephens-Davidowitz's work goes beyond the context of the election. It shows that while racial attitudes on balance are likely to be changing for the better, to some extent racism is simply being driven further underground -- where it can be harder to see but no less impactful. Our elected officials have a responsibility, and we have a responsibility, to avoid the seduction of claiming that we've arrived at a "post-racial" America prematurely. If we fail to summon the courage necessary to identify racial animus where it exists, and to in turn adjust our approach to policy-making accordingly, all Americans will pay a price, not just those who are the typical targets of racial animus.