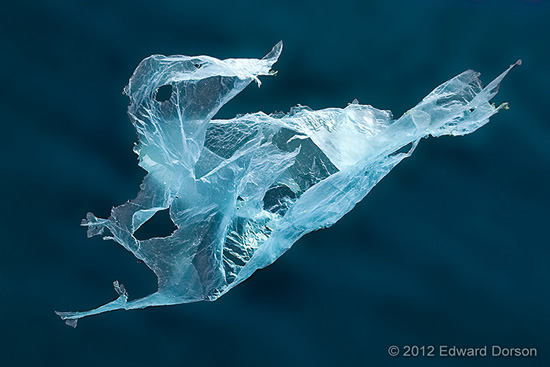 "The Overfish": A drifting plastic sheet as a vision of the future awaiting the ocean

The siege upon the ocean is now in its final convulsion. Nearly all marine species are enduring man-made forces that are outpacing their ability to reproduce and adapt to a deteriorating environment. Overfishing, dumping pollutants, rising sea levels and temperatures, dissolving reefs and shelled organisms by spewing ever more CO2... all besiege the ocean. The assault on terrestrial species and habitat, as bad as it is, pales in comparison.

Rio+20, the U.N. summit meeting supposedly guiding sustainable development and Earth's environmental future, began June 20, 2012 with a terribly watered-down draft statement, titled "The Future We Want." Representing 190 nations, the great majority of delegates were instead protecting their governments' shortsighted monetary interests rather than addressing the reality of an imperiled planet, which included the glaring omission of a clear mandate to end the unabated decimation of the ocean.

Now is not the time for toothless proclamations from summits like the charade taking place in Rio de Janeiro. The International Energy Agency, the world's foremost authority on energy economics, issued a no-nonsense deadline in their annual World Energy Outlook in November of 2011. They revealed that Earth would lock-in runaway feedback processes by 2017 if fossil fuel use continued to increase. While lifestyle choice depends on using more fossil fuel, life depends on using less. It's too late for piecemeal solutions. We have just five crucial years to level out on fossil fuel extraction and emissions while halting the degradation of vital greenhouse gas reservoirs: the soil, tundra, forests and ocean.

In early 2011, marine scientists at the International Program on the State of the Ocean, working with the International Union for Conservation of Nature, examined the ocean's condition regarding the combined impact of climate chaos, acidification and overfishing. They concluded that the ocean would soon approach catastrophic, potentially irreversible change. The consequence is unequivocal: "If the ocean continues to decline, it will reach a point where it can no longer function effectively and our planet will be unable to sustain the ecosystems that support humankind."

Without exaggeration, a ruined ocean rivals a massive asteroid strike in orders of magnitude. As the ocean is essential to maintain Earth's life-support systems, this unfolding disaster will severely impact life on land as well. Sixty-five million years ago, Earth's 5th mass extinction event destroyed 85% of all life when an asteroid slammed into the Yucatan peninsula. This time around, we are the asteroid.

Tragically, despite decades of increasingly dire warnings from the world's leading organizations on climate and earth science, no significant action is underway. The perpetual growth myth and willful ignorance remain the status quo, even though our own survival is clearly at stake. The answer lies within our capacity to foresee and forestall. Unlike an asteroid, we possess a precious gift: the ability to alter course.

While dangerous acidity and greenhouse gas levels are already embedded in Earth's ecosystems, overfishing is a major stressor that can be readily eliminated. We can rapidly downscale fishing pressure and expand marine protected areas (MPAs). Government subsidies for fishing fleets must cease, while only science-based management should govern legislation on the proper use of the seas. Navies and coastal patrols can enforce a new generation of strict maritime laws in a global campaign to seize all illegal, unreported and unregulated (IUU) fishing vessels.

Artisanal boats can strive to achieve sustainability by monitoring their catches through local consensus and by using selective methods such as handline fishing. Conversely, most far-ranging nomadic ships are indiscriminately pillaging the seas with mechanized efficiency, such as netting entire schools that gather beneath fish aggregating devices (FADs). Using equipment such as longlines, trawls, purse seines and driftnets, these vessels are ultimately producing famine rather than nourishment. After an area is fished-out, they simply move on to ravage yet another fishery. All IUU ships should be recognized as weapons of mass destruction in an on-going attack and acted upon in terms of disarmament. Confiscated vessels can be refitted for benign use, cut up for scrap or sunk. After decontamination, sunken ships can provide replenishment as new habitat.

People are a part of nature, its domination is an ingrained conceit we can no longer indulge. All the rhetoric about marine preservation is ultimately about one single goal: to curtail economic ruthlessness to ensure the ocean's vitality for the sake of its inhabitants and, in return, a habitable world. Once the consequence of unsustainable exploitation is fully realized, that greed-driven practices will devastate young and future generations, reason and integrity can spur both individual lifestyle change and collective systemic change. As for the latter, governments can be compelled to act, but only with a growing public involvement demanding an all-out offensive to end the ocean's destruction.

Saving the ocean is nothing less than an absolute necessity...humankind's most immediate and profound planetary challenge. The seas can still possibly rebound, but only if the carnage is reversed with a surge of action based on precaution, protection and restoration. When those we love face immanent danger, we'll use all means necessary to defend them. By extension, we must be equally determined to defend the life of an ocean which sustains all we love.