The Arctic Ocean lies in one of the most remote regions of the planet, thousands of miles away from industrial cities and mining operations that release anthropogenic mercury to the environment. Global dispersion of mercury pollution is boundless -- even at the top of the world the Arctic is not out of reach and photochemical reactions with snow and ice may even amplify deposition to the basin. This summer, three separate research teams from the United States, Canada, and Germany are traveling to the Arctic Ocean to determine how mercury enters the basin and ultimately, the marine food web.

Mercury is released to the environment through natural processes such as volcanic emissions and weathering, and not-so-natural processes like burning massive quantities of coal to generate electricity or stripping mercury from ore for industry and mining. At room temperature mercury is a liquid, but when heated it becomes a gas that can travel with air masses for up to one year, reaching remote regions like the Arctic Ocean.

The amount of mercury in the ocean has increased since the industrial revolution began in the late 1700s. This is a problem because the ocean is alive with microscopic bacteria that have an uncanny ability to add carbon and hydrogen to mercury creating a toxic compound call methylmercury. Phytoplankton absorb methylmercury from seawater contaminating the base of the food web, methylmercury then biomagnifies up the food chain reaching high concentrations in top predators such as ringed seals and Beluga whales that are important food staples for many Arctic communities.

Humans are exposed to methylmercury through the consumption of seafood and unfortunately, concentrations are high in many Arctic marine mammals. The United States Environmental Protection Agency recommends limiting daily consumption to 0.1 micrograms of methylmercury per kilogram of body mass. Based on this recommendation, one 3 oz serving of Arctic Char, Beluga whale, or ringed seal would deliver two to four times the daily recommended dose of methylmercury to a 150 lb individual. Many women in Alaska, Greenland, northern Canada and Russia have blood mercury levels considered unsafe by both U.S. and Canadian public health guidelines. During pregnancy, methylmercury in the maternal bloodstream is thought to impair the neurological development of unborn children. A recent study in the Canadian Arctic found that children exposed to high levels of methylmercury in utero were 3x more likely to suffer from a learning disability later in life.

In the Arctic, atmospheric deposition of mercury has increased by a factor of three since the industrial revolution but some top predator marine mammals have 10-15 times more mercury than the pre-industrial era -- mercury is accumulating in Arctic marine mammals faster than it is deposited. Where is the excess mercury coming from? One theory is that river discharge delivers large quantities of mercury from Arctic watersheds. The Arctic Ocean is only 1 per cent of global ocean surface area but receives 10 per cent of global river discharge, and a majority of this discharge occurs during a short three month period that could deliver a large annual pulse of mercury to the basin.

This summer the United States, Canada, and Germany will send three separate icebreakers into the Arctic Ocean to study mercury chemistry in the basin. This work is part of an international program called GEOTRACES, an organized effort to study trace metals and elements in the global ocean. Our goal is to understand how mercury moves through the Arctic Ocean and why mercury concentrations in the Arctic are increasing at a faster rate than other parts of the world. We will measure mercury and methylmercury in hundreds of seawater, snow, melt pond and aerosol samples. I will be joining the U.S. team which departs on August 9th from Dutch Harbor, Alaska onboard the Healy, a Coast Guard icebreaker. We will collect samples from the Pacific Ocean, the Bering Strait, and the Chukchi Sea before attempting to break through the ice all the way to the North Pole. The German team will depart from Norway on August 15, and the Canadian expedition is currently underway. 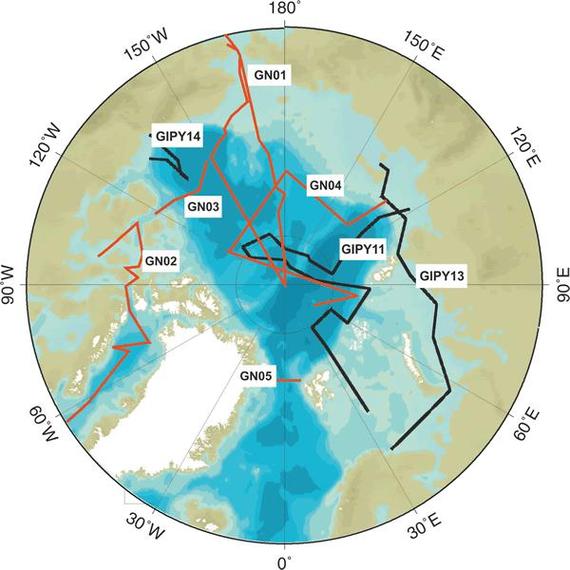