The Organization for Economic Cooperation and Development's 2012 Education at a Glance report released today is a trove of education indicators.

By analyzing the education systems of the 34 OECD member countries and eight others, the report makes a number of global education comparisons. The United States, for example, is the fifth most educated country in the world, with 42 percent of those aged 25 fo 64 having attained some level of higher education. American students, however, were also found to struggle more than their foreign peers to top their parents. The odds of a young person reaching a level of education higher than that of their parents is a mere 29 percent, one of the lowest levels among OECD countries.

The findings bring to mind previous OECD findings based on its Program for International Student Assessment, an international exam for 15-year-olds. In 2009, students in Shanghai who took the PISA for the first time outscored every other school system in the world. On the same exam, American students ranked 25th in math, 17th in science and 14th in reading -- often behind countries like Finland, China, Singapore, South Korea and Hong Kong.

"The brutal fact here is there are many countries that are far ahead of us and improving more rapidly than we are," U.S. Secretary of Education Arne Duncan told Bloomberg at the time. "This should be a massive wake-up call to the entire country."

Could you pass the test? Test your skills with some sample questions asked of 15-year-olds on the PISA, courtesy of the American Enterprise Institute. Are you smarter than a 10th grader?

PHOTO GALLERY
Are You Smarter Than A 10th Grader?
Download
Calling all HuffPost superfans!
Sign up for membership to become a founding member and help shape HuffPost's next chapter
Join HuffPost

OECD Exam For Students Around The World: Could You Pass The Test?
Are You Smarter Than A 10th Grader? 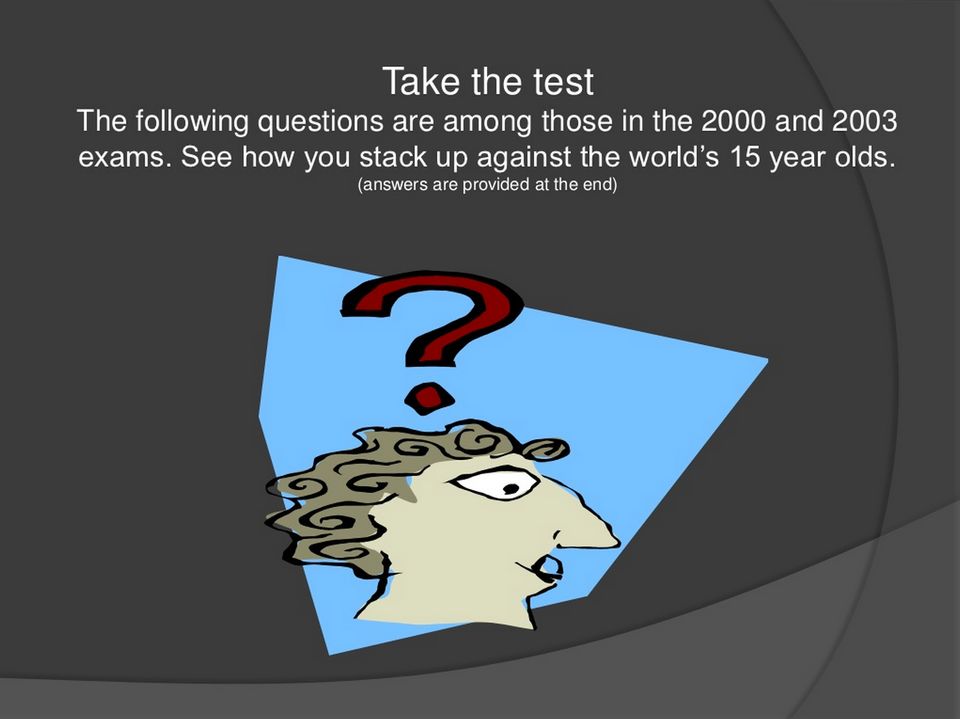