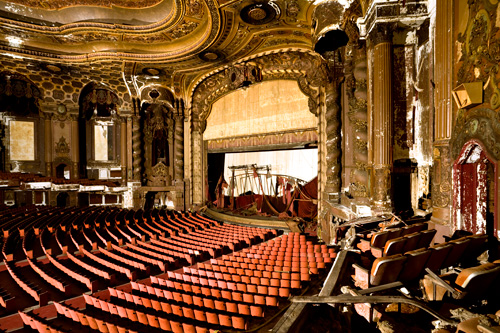 As a photographer who studies modern ruins, I would like to collapse a fallacious generalization that Leary repeatedly makes in his analysis. Leary's obvious viewpoint on abandonment photography in general can perhaps be best summed up by his suggestion that "one often finds oneself asking of [modern ruins photography] first, 'What happened?' followed swiftly by, 'What's your point?'" Leary's fallacy is that he never addresses the fact that there are a variety of salient answers to the latter question.

Leary has assumed a tautology - a logical equivalence - between "abandonment photography" and "ruin porn." This tautology is not valid, and Leary dances around this notion without addressing it: "Indeed, what is most unsettling - but also most troubling - in Moore's photos is their resistance to any narrative content or explication." In bringing up this lack of context and applying it to all modern ruins photography, Leary neglects the entire class of ruins photography centered around documentation. Since the invention of the daguerreotype, photographers have been studying ruins; Rome and Egypt were very common destinations for lensmen. Modern ruins are no different, and indeed, are often studied with the same historical and documentary intentions as these early explorers. 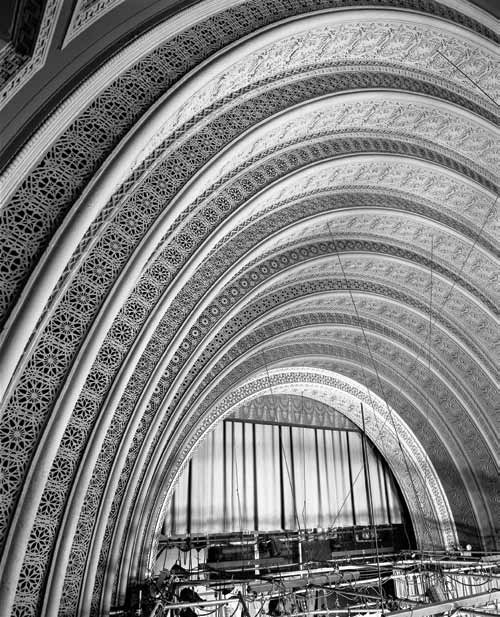 Probably the greatest ruins photographer of the 20th century, Richard Nickel was active in the Chicago area from the 50s through the early 70s. An avid historian and an immensely talented photographer, Nickel was enamored with the architecture of Louis Sullivan, and lamented the fact that it was being torn down at a rapid pace. During the years he was active, Nickel created thousands of medium format negatives, primarily of Sullivan commissions that were endangered or being demolished. His archive is by far the best extant record of these buildings. In effect, a ruins photographer is the primary reason we have a detailed document of an entire body of architecture. 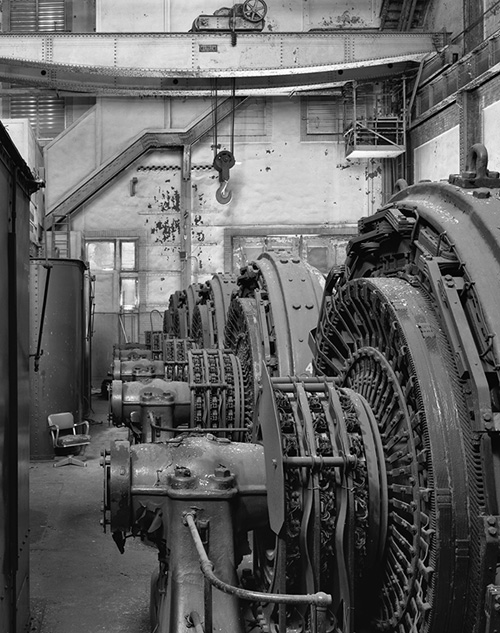 Present-day ruins photographer Christopher Payne's New York's Forgotten Substations details the history and functioning of the now-decommissioned substations which used to power the New York City subway system. The large-format black-and-white photographs in this book are an amazing visual record of a now-outmoded class of structures. Importantly, it is the only such collection available.

Ruins photography can also serve as a small, but integral, sidenote to a complete history. Clifford W. Zink's compelling monograph The Hackensack Water Works contains a handful of contemporary photographs of the now-abandoned titular plant and its intact pumping engines. The majority of the book is devoted to a complete account of one of the most historically significant waterworks projects in America. The photographs serve as an elegiac indictment of a society willing to let a cultural treasure such as this fall into a state of disrepair.

In all of these cases, there is a clear intentionality on the part of the photographer to capture and document something that is likely ephemeral and certainly important. It seems almost absurd to attack work of this nature, and yet this is exactly what Leary does in his indictment of "liberal posturing of sympathy for a 'man-made Katrina.'" Nickel was a highly politicized figure, pushing like Sisyphus to preserve the structures he was documenting. Payne is entirely apolitical, presenting a documentary record without an agenda. The photographers who portrayed the waterworks after its abandonment likewise have no overt agenda, and yet in the context of a remarkable history, their work appears 'guilty' of what Leary accuses - it arouses our sympathies for an important cultural relic that has been woefully neglected. It seems absurd to accuse any of these photographers of either exploitation or 'rejoicing.' Clearly, Leary's tautology fails. 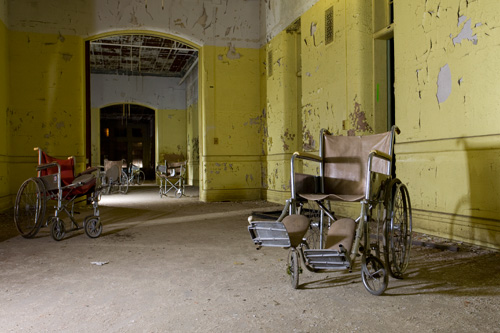 - Editorial impartiality or sensationalism, particularly in fetishizing the eerie or macabre. Instead of providing a neutral viewpoint of a structure with a complex history, the photographer artificially heightens certain properties of a ruin in order to exploit one small aspect of its history. Institutional abandonments such as hospitals and asylums are particularly vulnerable to this cheap sort of exploitation.

- Misleading or falsified historical context. This trend is common among today's dilettantish new generation of "urban exploration photographers," who display photographs of buildings - or even sets of photos from various buildings - under false names, with either absent or misleading contextual information. This exploits the genuine histories of real places, and also exploits the viewer's sensibilities. 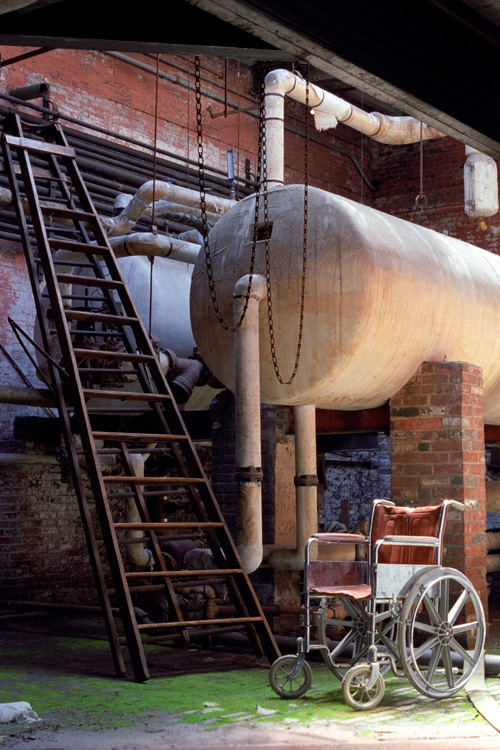 - Portrayal of contrived or staged subjects. The photo above is an example - when I came upon the scene, I thought it was an interesting shot, and set up my camera. It was only later that I realized that the artificiality of the shot was repugnant; clearly, the wheelchair had been placed in the scene to make for an "interesting shot." The intentional staging of such scenes is not only exploitative of the real histories of the buildings, which would have included none of these elements, but also of the viewer of the photograph. If the viewer is relatively unacquainted with such places, and is looking at the photograph in order to perhaps learn something about the sort of building being studied, then the effect of the contrivance is downright mendacious.

- Transparent ploys to manipulate a viewer's sympathies. Leary quite rightly berates Moore for photos that "tend towards overwrought melodrama, like the photograph of an abandoned nursing home tagged with a spray-painted slogan, 'God Has Left Detroit.'" An image like this tells us nothing about the building, about its historic context, about any genuine narrative outside of a kid with a can of spraypaint and a sense of irony. This exploits the viewer of the photograph.

Leary set out to show that two monographs depicting structural decay in Detroit lack any insightful addition to a narrative of the city, and are merely exploitative in nature. In making his argument for exploitation, Leary sets up a notion of 'ruin porn' that is too broad in scope; numerous times in his essay, he conflates all of modern ruins photography with exploitation. As I've shown, this tautology fails. As hinted at by my analogy to nude photography, ruins photography can certainly be exploitative in nature, but it can also be artistic, documentary, or educational. An analysis of what constitutes "artistic" ruins photography is well outside the scope of this post, but I would hope that it would be obvious that such a thing exists.

There is plenty of gray area surrounding the concept of 'ruin porn', and I have no wish to pass judgment on the works of Moore and of Marchand and Meffre beyond mentioning that they certainly don't have the import of a narrowly-scoped documentary study. Collections such as Payne's aforementioned monograph on New York's substations, Cook and Emond's recent examination of grain elevators in Buffalo, and John Bartlestone's survey of the Brooklyn Navy Yard provide an important historical record - one that would not exist without the efforts of such individuals. They have a certain gravity because they carefully and neutrally document these cultural artifacts.

Because the story of Detroit's decline is well known, and its buildings well documented, the recent books lack the same historic and documentary gravity, although they contain some elegant photographs. A ruins photographer visiting Detroit is akin to a nature photographer visiting the Grand Canyon. A talented lensman is guaranteed to get some technically stunning, but culturally insignificant, photographs of a beautiful and much-studied subject. When Camilo José Vergara began studying the city over two decades ago, it was not the "abandoned building Mecca" that it has become today, and thus Vergara's work has a gravitas that the more recent works do not. 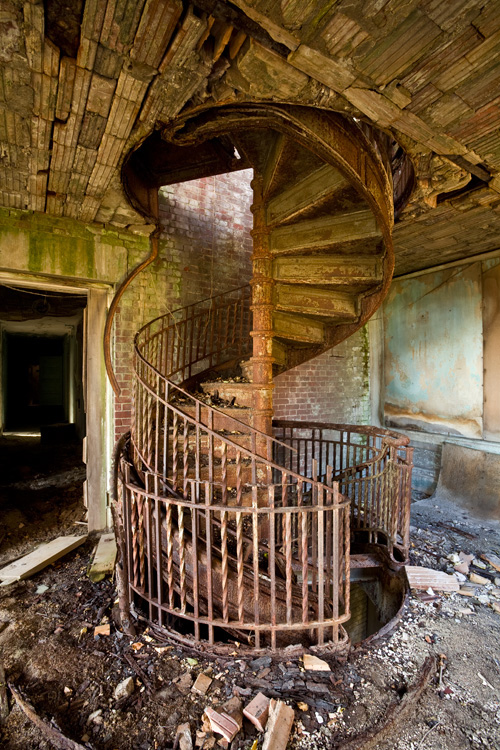 All photographs are owned and copyrighted by the author unless otherwise noted.