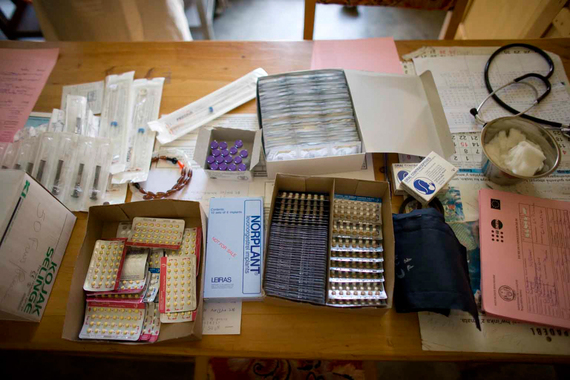 A selection of contraceptive methods at a health facility in Rwanda. Photo by Charles Harris for IntraHealth International.

Today is World Population Day, an annual event established in 1989 to focus attention on critical issues related to population. In late 2015, the United Nations adopted the Sustainable Development Goals (SDGs) centered on 5 'P's: People, Planet, Prosperity, Peace, and Partnership. And back in 1967, a Time magazine cover highlighted a game-changing new technology: "The Pill."

What do these events have in common, besides the letter P and the flow of time?

They all entail change, evolutionary or revolutionary. And they all relate to population -- its composition, distribution, growth rate, and ultimate size. By enabling the uncoupling of sex from reproduction, the oral contraceptive pill launched the "sexual revolution" that was so much a part of the fabric of the Sixties. But what was really revolutionary about the Pill -- and by extension, all other modern methods of contraception -- is that it changed women's and men's understanding of their fertility: The number, timing and spacing of your children is up to you, once you have access to effective contraception.

Access to modern contraception has become a widely recognized human right and, increasingly, across the globe, contraceptive use has become an informed individual choice. Yet data regarding world population growth might seem to suggest that international family planning programs have not performed well. After all, when the birth control pill was approved by the U.S. Food and Drug Administration in 1960, the world's population was 3 billion. On that first World Population Day in 1989 it had just crossed 5 billion. Now, in mid-2016, it has climbed to almost 7.4 billion, and is projected to rise to almost 10 billion by 2040 and more than 11 billion by 2100.

But consider this: in 1965, when the United States Agency for International Development (USAID) established its Office of Population, only 9 percent of married women in "less developed countries" used modern contraception. These women had more than six children on average. Fifty years later, 55 percent of women are using modern contraception in these countries, compared to 59 percent in "more developed countries," and the average number of children per woman has declined markedly, to 2.6. Without family planning programs, the world's population would be an estimated 700 million more; rates of maternal deaths and disability also would be considerably higher.

Leadership and innovation from the international donor community and the private sector has spurred the development of contraceptive methods like hormonal implants and intrauterine devices (IUDs), and the diffusion of high-impact service delivery practices such as community-based provision of methods, contraceptive social marketing, and contraceptive provision by lower levels of trained health professionals. In addition, the increasing availability of digital solutions for training and information sharing is allowing countries to achieve faster, more sustainable progress in their family planning programs.

Further, nongovernmental organizations like IntraHealth International have continued to advocate for investments in family planning as essential for human and economic development. And the message is resonating. High contraceptive access and use in rapidly-developing "middle-income" countries has helped generate their economic growth and development, which in turn has fueled increasing adoption of contraception. Global megatrends such as rapid urbanization, women's education and empowerment, and the spread of social media are driving a desire for smaller families. This desire is achieved by use of modern contraceptive methods, enabling greater investment per child and greater women's health and family well-being.

Family planning has a positive impact on all 17 of the SDGs, not only SDG 3, Good Health and Well-Being, and SDG 5, Gender Equality, but also SDG 1 (No Poverty), SDG 2 (Zero Hunger), SDG 8 (Economic Growth), and SDG 10 (Reduced Inequalities). Sub-Saharan Africa's urban growth rate of 5 percent per year is fueling peri-urban slums, with all their attendant misery and volatility, related to SDG 11 (Sustainable Cities). There is arguably no more feasible and cost-effective intervention for the environment than increased access to voluntary family planning, related to SDG 13 (Climate Action). Wide access to contraceptive services increases political stability, as called for in SDG 16 (Peace, Justice, and Strong Institutions). And like it or not, we are all in this together, as reflected in SDG 17 (Partnerships).

The international family planning community knows "what works." What have been lacking, however, are political will and adequate financial and human resources to enable wider provision of family planning services.

More than 225 million women, each with her own specific individual circumstances, still have an unmet need for modern contraception; that number is even more striking when written out: 225,000,000. This year's World Population Day theme of investing in teenage girls is especially apt, as the largest cohorts in human history are entering their reproductive years. We must ensure widely available, respectful, welcoming, and stigma-free access to modern contraceptive services for young people. Over 90 percent of sexually-active unmarried young women worldwide want to avoid pregnancy, but many have great difficulty in accessing contraceptive services.

Compounding this challenge, in the U.S. the broad bipartisan support for population assistance that once existed in Congress has fallen away in the face of abortion politics and partisan political rancor. This change has taken place despite longstanding prohibitions on U.S. government financial support for abortion services, and the fact that abortion almost always represents, in some sense, "failed family planning." When contraceptive services are less available, abortions, whether legal or not, rise. Contraceptive use reduces maternal deaths by over 30 percent, and 99 percent of such deaths occur in low-income countries.

The annual total of U.S. foreign assistance to family planning programs in low-income countries is about 600 million dollars. That sounds like a lot of money. But we Americans spend 13 times that much every year -- 6.9 billion dollars -- on Halloween alone.

The U.S. contribution to family planning programs represents less than one cheeseburger per American per year. Surely we could make it three cheeseburgers.