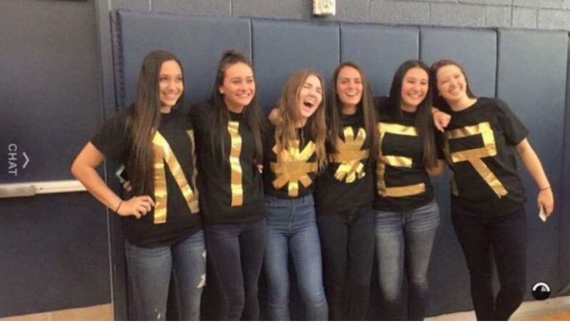 To the Girls From Desert Vista High School Posing in This Photo,

What the hell is wrong with you?

I'm not the only person asking this after your picture surfaced on the Internet, but really, what the hell is wrong with you?

You smiled and posed in an awful picture, and now I have a question to pose to you: How on Earth did all six of you seem to think this was A) a good idea, B) something even remotely funny and C) something worth posting on the Internet? I cannot fathom what was going through your brains, all six of your brains, ones I know are well educated, seeing as I spent four years at the same school roughly 15 years ago.

Last weekend, I was in Phoenix for my sister's baby shower, and drove past Desert Vista High School where I graduated in 2002; a school where I was taught by many fine educators. I learned about the U.S. government from Mr. Kemp my senior year. I was lit up in Ms. Kyle's Freshman English class in 1999. She taught me the art of structural writing, and to love the written word. Principal McDonald roamed the hallways, said hello to students, and signed my high school diploma. Each one of them contributed to my education, and each one of them is African American.

I drove home to San Diego on Monday the 18th, Martin Luther King Jr. Day. You know, the day you didn't have to attend school as it's a federal holiday in Martin Luther King, Jr.'s name, to honor a man who protested against racial discrimination? The man who fought for Civil Rights for an oppressed minority, and was subsequently assassinated for doing so in 1968?

As I drove down Pecos Road towards the I-10 freeway, I explained to my young daughter that one of the last turns off Pecos Road was where I went to high school. That was where I'd made best friends, prepared for University and spent some of the best years of my life. She smiled and asked what high school was like, what my friends' names were, and who my favorite teacher was.

I reminisced about those friends, many I'm still in contact with to this day, whose children light up my Facebook feed. I thought of teachers who heavily impacted my life, who I still periodically reach out to, like my favorite teacher, Mr. Munczek.

I thought about hours spent in math lab, repeating Geometry in summer school, my first Nokia cell phone, prom, my first car (a Toyota Corolla that I decked out in zebra print everything), winter formal, my first boyfriend, and finally, about my graduation day. Four years of memories flooded my brain, and as I exhaled and made my way onto the I-10 South, I smiled.

You'd have the same memories that I have now, but after yesterday, you won't.

You will forever be branded as "the six girls who spelled out hate speech during the senior photo" and "the girls who were only suspended for 5 days."

At first, I was angry at the rumored 5 day suspension as punishment. Then, I quickly realized your actions will follow you for the rest of your life, and I'm quite certain that's worse. Perhaps no suspension at all would be better, so you six can face your peers Monday morning and see the looks on their faces, and the irreparable damage you caused.

You went viral girls, you sure did- in the worst possible way.

I pray for your sake you recognize what an astronomical error you have made, and the continuing impact it will have on your young lives. There is no excuse at seventeen/eighteen years of age to justify the actions you took. Friday, January 22, 2016 will more likely be the day etched in your memory and in the memories of every other person making up your class than the actual Class of 2016 Graduation Day, which is quite sad.

A fun senior picture spelling out: "Best*You've*Ever*Seen*Class*Of*2016," you managed to, unfortunately, negate for nearly your entire graduating class. I'm hopeful many will see past the actions of six thoughtless individuals, and be able to recognize the remainder of your class for their four years of hard work. Furthermore, I hope your incredibly heartless actions teach you many lessons. Foremost, I hope you recognize your hate speech, actions, and Internet posting did not just affect you, they affected your whole class, your community, your city, and your state.

I hope from this negative image, true character develops. A picture is worth a thousand words, but all that's left to say is that you've disappointed and embarrassed countless individuals, myself included. We might have come from the same place, but you six have a long way to go yet.

Ashley Alteman is the writer behind SmashleyAshley.com where she details her laugh-out-loud parenting moments, personal trials and triumphs, and everything in between. Her work has appeared on The Huffington Post, Scary Mommy, Mamapedia, BLUNTmoms, and more. You can find her on Facebook, Twitter, and Instagram.