Anonymous, an activist hacker group that has been disabling websites in a show of support for WikiLeaks, claims that Facebook has just banned its page.

A Facebook Page is a distinct presence used solely for business or promotional purposes. Among other things, Pages that are hateful, threatening, or obscene are not allowed. We also take down Pages that attack n individual or group, or that are set up by an unauthorized individual.

While companies like MasterCard, Visa, and PayPal have cut ties with WikiLeaks, Facebook has thus far allowed the website to maintain its presence on the social networking site. With regard to the possibility that Facebook might remove WikiLeaks' Page, a Facebook spokesperson told ReadWriteWeb, "The Wikileaks Facebook Page does not violate our content standards nor have we encountered any material posted on the page that violates our policies."

We take our Statement of Rights and Responsibilities very seriously and react quickly to reports of inappropriate content and behavior. Specifically, we're sensitive to content that includes pornography, bullying, hate speech, and threats of violence. We also take action on content that we find or that's reported to us that promotes unlawful activity. The goal of these policies is to strike a very delicate balance between giving people the freedom to express their opinions and viewpoints even those that may be controversial to some and maintaining a safe and trusted environment. 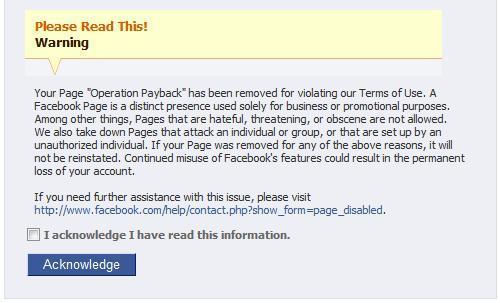