Japan has a surprisingly large influence on U.S. nuclear policy. But it is not the influence that most Japanese citizens think it is -- or want it to be. U.S. officials are presently working hard to finish a new Nuclear Posture Review that will shape the direction of U.S. nuclear policy and the size of the U.S. nuclear arsenal for the next five to ten years. This report is written by the Department of Defense and will be given to President Obama at the end of the year.

In preparing the report, defense officials are not citing the appeals from the mayors of Hiroshima and Nagasaki for the abolition of nuclear weapons. Nor are they citing the important statement of Prime Minister Yukio Hatoyama, who said, "I highly approve of President Obama's courageous leadership... We will work together with the United States toward a world without nuclear weapons."

No, the most important Japanese voices in the United States right now are secret voices. A small group of conservative Japanese defense officials have spread the view that if the United States reduces its nuclear arsenal, then Japan will build its own nuclear bombs.

This issue emerged this year in the deeply-flawed report of the U.S. Strategic Posture Commission, chaired by former-Secretaries of Defense William Perry and James Schlesinger. Conservatives on the commission twice brought in Japanese officials to make these claims. It worked. The report devoted key sections to the issue of "extended deterrence." This is the theory that the U.S. nuclear arsenal protects U.S. allies who, therefore, do not have to build their own nuclear weapons. Conservatives used these Japanese statements to justify keeping a massive U.S. nuclear arsenal indefinitely. Nuclear hawk Keith Payne, a member of the Commission, said, "If the U.S. extended nuclear deterrent loses credibility, some in Japan believe that other security options will have to be examined." The Commission itself noted in veiled language that "one particularly important ally" [read: Japan] argued privately that perceived credibility in the U.S. extended deterrent depended on the U.S. maintaining "specific capabilities to hold a wide variety of targets at risk." Thus, Japan again looms large in U.S. nuclear policy. Some officials -- including some writing the posture review -- believe these repeated stories of deep Japanese concern over U.S. reductions. They may tell the President that he cannot reduce U.S. weapons without causing a Japanese nuclear weapons program. In sum, they are saying that nuclear reductions will promote proliferation. Japan must correct this record. Japanese officials must rebut these false claims. If they do not, this myth will persist and prevail. If they do not, we may lose the chance we now have to put the United States and Russia firmly on the path to deep reductions and eventual elimination of nuclear weapons. 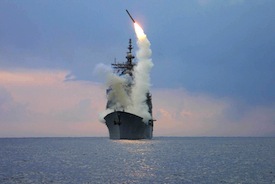 The United States has an estimated 9,400 nuclear weapons. About half of these are scheduled for dismantlement and half in the "active stockpile." Several thousand weapons, each ten times more powerful than the bomb that destroyed Hiroshima, are earmarked for targets in the Pacific region. At any moment, in service of its nuclear strategy in the Pacific, the U.S. has ready about 100 Tomahawk Land Attack Missiles, over 1,000 Submarine-Launched Ballistic Missiles, and well over 1,300 extra warheads in reserve if necessary. In addition, the U.S. designates 500 warheads on its Minuteman III Intercontinental Ballistic Missiles for strike options in the Pacific region, and gives contingency nuclear missions to U.S.-based strategic and tactical bombers. Photo: U.S. Navy tests a Tomahawk Land Attack Missile

Our massive arsenal holds far more weapons than necessary to deter any threat to Japan. As Hans Kristensen of the Federation of American Scientists notes, even if this Pacific posture were cut in half, it would still be three times the size of the entire Chinese nuclear stockpile. Thus, even after the United States retires some weapons, including the Tomahawk cruise missiles, it will retain for years the equivalent of 1000s of Nagasaki and Hiroshima bombs that will effectively deter any nuclear attack on Japan. We should strive to eliminate all nuclear weapons, step by step, with all nations reducing together. While we reduce -- and after we abolish -- nuclear weapons, Japan will be defended by the strong and enduring U.S.-Japan alliance. This alliance is about much more than nuclear bombs. It is backed by powerful conventional forces and more importantly, the close, often personal, political bonds between the U.S. and Japan. The threat to Japan is not the elimination of weapons, it is their spread. President Obama said at the United Nations, "The threat of proliferation is growing in scope and complexity. If we fail to act, we will invite nuclear arms races in every region, and the prospect of wars and acts of terror on a scale that we can hardly imagine."

There has been positive progress in the last few months bringing North Korea slowly back to negotiations. There has been also progress with Iran in just the past few weeks. Japan can play important roles in both these crises, with tough, direct diplomacy to support strong sanctions if the two nations continue to violate U.N. resolutions and to support direct dialogue to negotiate an end to both nuclear programs. Last month at the UN, Chinese President Hu Jintao supported the resolution on nonproliferation and disarmament. President Hu said, "All nuclear-weapons states should make a firm and unconditional commitment not to use or threaten to use weapons against non-nuclear weapons states." Japan's Foreign Minister Katsuya Okada agrees. He said at his inaugural press conference in September that "the first use of nuclear weapons should not be accepted," and that he "[does] not believe that deterrence would be weakened as a result." He further stated, "I believe an argument can be made that it is illegal for countries that possess nuclear weapons to use nuclear weapons against countries that do not possess nuclear weapons."

Prime Minister Hatoyama says in support of the elimination of nuclear weapons, "It is high time for us to take action." He is correct. The Japanese government should repeat as often and as clearly as possible that it supports reductions in U.S. and other nations' nuclear arsenals and that it supports U.S. ratification of the Comprehensive Test Ban Treaty. He should consider writing an article for U.S. newspapers directly stating his views.

As Mr. Hatoyama has said, "we have no time to waste." Now is the time to act.

A longer version of this article appeared originally in the Hiroshima Peace Media Center of the Chugoku Shimbun.