In health care public policy fights, it's very hard for an underdog to overcome a massively funded lobbying and propaganda campaign.

Today, though, the underdog is celebrating a huge win. One so big, in fact, that it most certainly will embolden groups in other states to take on the same adversary--organized dentistry.

The victory was made official this morning when Vermont Gov. Peter Shumlin signed a bill that will greatly expand access to dental care in the Green Mountain State by expanding the dental workforce. It will do so by enabling mid-level providers--called dental therapists--to practice in the state.

With Shumlin's signature, Vermont becomes the sixth state in which dental therapists--similar to nurse practitioners and physician assistants in medicine--can treat patients (under the supervision of a dentist), or will soon be able to. 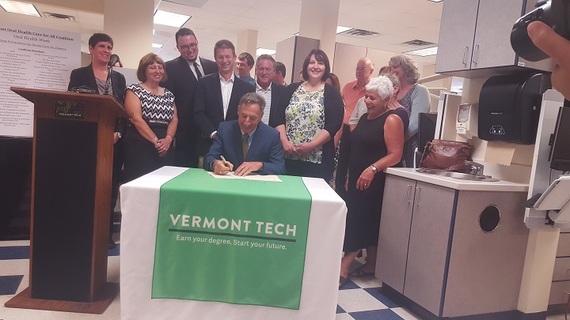 The win in Vermont continues the momentum that advocates for improving access to dental care have gained in recent months. And it represents a substantial setback to organized dentistry, which for more than a decade has been bankrolling a campaign aimed at keeping dental therapists from practicing in the United States. It reportedly spent more than $200,000 in lobbying expenses alone over the past two years in Vermont, a huge amount for such a small state.

What organized dentistry tries to do in its ongoing campaign is create the impression that dental therapists provide substandard care--despite the lack of evidence to support that claim. The ads and other materials state dental societies create don't cite any corroborating research to bolster their claim, and for a very good reason--it doesn't exist. Nevertheless, their materials seek to convince Americans that the quality of dental care will somehow deteriorate for all of us if dental therapists are allowed to practice.

The truth, however, is that dental therapists have been treating patients in at least 50 countries for many years, starting in New Zealand where they've been practicing for close to a century. And numerous studies have found that the care they provide is both safe and cost-effective. Other studies have shown that dental therapists get as much if not more training than dentists in the 30 or so procedures they're licensed to perform, which range from screenings and cleanings to some fillings and extractions.

Just as important, dental therapists are meeting a great need by providing care to people who otherwise would go untreated, people who live in poor neighborhoods of big cities, on tribal land or in rural areas where few if any dentists are willing to practice. Access is especially problematic in low-income communities of color because only 20 percent of dentists treat Medicaid patients.

You'd never learn any of this from reading a postcard the Vermont Dental Society mailed out as state legislators began debating the dental therapist bill earlier this year in Montpelier. Next to an image of a smiling young woman in a white dentist's smock was this dire warning and call to action:

WE NEED YOUR URGENT HELP!
Stop state government from lowering your standard of dental care.
Help us protect patients.

The other side of the card warned of a grim future if the state wasn't stopped:

The legislature is poised to pass an experimental plan lowering the standard of dental care without saving patients or the state any money.

People who received the postcards were asked to call their state representative (the cards were customized with individual legislators' names and phone numbers) and demand a "no" vote on the bill.

The campaign in Vermont was not original. In fact, it was a copycat of campaigns other dental societies around the country have waged to derail bills that would allow dental therapists to practice, starting in Alaska. The misleading nature of the messaging hasn't changed in the ten years since the Alaska Dental Society launched an ultimately unsuccessful effort to keep Alaska Native tribal leaders from exercising their rights as sovereign nations to allow dental therapists to treat patients on tribal lands. This despite the fact that tribal leaders not only wanted them, they worked collaboratively through the Alaska Native Tribal Health Consortium (ANTHC) to cover the cost of sending four tribal members to the University of Otago in New Zealand for two years of intensive dental therapy training.

An ad in Alaska's newspapers--in the form of an open letter to then-Governor Lisa Murkowski--featured a picture of an angry grizzly bearing its teeth right below this headline:

The dental society went so far as to file a lawsuit against the ANTHC and even the students, but the tribes ultimately won the right to train and license dental therapists. Today, more than 30 of them are providing culturally competent dental care to 45,000 previously underserved patients in 81 communities across Alaska. Some parts of the state are now seeing their first generation of cavity-free children, thanks to the dental therapists.

The Vermont Dental Society's postcard made no mention of any of that, or the fact that dental therapists have also been treating thousands of Minnesota residents, safely and cost-effectively, since 2011. Nor did it mention that lawmakers in another New England state, Maine, have also passed legislation allowing dental therapists to practice.

The Vermont vote also comes on the heels of wins in the Pacific Northwest. A dental therapist is now treating patients on tribal land in Washington, and dental therapists will soon be practicing in Oregon under a statewide demonstration program. Adding to the momentum was the recent decision by the Commission on Dental Accreditation, the independent accrediting body for U.S. dentistry education programs, to begin implementing dental therapy education standards. The commission's action was an important recognition of dental therapy as a profession.

Joining Shumlin at today's bill signing was Carlen Finn, executive director of Voices for Vermont's Children, which led a broad-based coalition of more than 50 organizations in support of the legislation.

Finn attributed the coalition's success to the effectiveness of the many stories they shared with lawmakers about Vermonters who didn't have access to affordable dental care. Another important factor: the bill enjoyed support across party lines.

"It was especially gratifying that members of every party believed dental therapists would make a difference in the health and wellbeing of kids and families in Vermont," she said.

Author's Note: This blog post is part of a series examining America's oral healthcare crisis. Be sure to read the previous post, " America's Silent Epidemic Will End When Public Officials Stop Kowtowing to a Single Special Interest."

You can find more about Wendell here.