Women are in such danger of osteoporosis they need regular bone scans. That was conventional medical "wisdom" since the first lucrative bone drug surfaced over a decade ago. But a recent article in the New England Journal of Medicine reveals that the warnings don't apply to 90 percent of women who have been getting the scans -- and the bone drugs the scans were designed to sell -- for no reason. How did this happen?

In 1994, a year before Fosamax, Merck's blockbuster bone drug, was approved, Merck began marketing the dangers of osteoporosis "far beyond ailing old ladies." It hired researcher Jeremy Allen to whip up osteopenia fears to sell bone drugs by planting bone scan machines in medical offices across the country, says National Public Radio. Allen created the faux "Bone Measurement Institute" to establish osteopenia, the "risk of osteoporosis," as a health epidemic. The scheme worked. By 1999, there were between 8,000 and 10,000 bone scan machines in medical offices, when there had been only 750 before the bone drugs hit the market. The diagnosis of osteopenia increased seven fold. 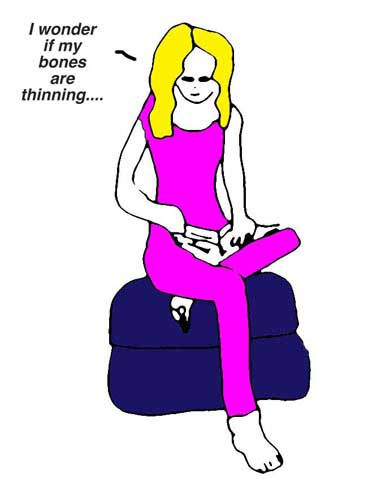 Allen's company also pushed through the Bone Mass Measurement Act, which made bone scans Medicare reimbursable. The legislation was written by Rep. Constance A. Morella, R-MD, who appeared with HHS Secretary Donna Shalala in 1998 at a rally kicking off free bone density screenings to be offered in 100 U.S. cities. Not that they had a opinion. The publicly-funded bone scans were so lucrative to drug companies, when their Medicare-reimbursement became threatened, an article in the Cleveland Clinic Journal of Medicine exhorted readers to "Lobby your legislators," scientific objectivity be damned.

The article, "Managing Osteoporosis: Challenges and Strategies," says without Medicare reimbursement, patients are "likely to be harmed by limited access to DXA testing [bone scans] because of fewer instruments in operation and greater distances to travel to reach them," and outpatient facilities will incur "financial losses."

While osteoporosis is a real disease, osteopenia was never meant to be "a disease in itself to be treated," says Dartmouth Medical School professor Anna Tosteson, M.D. who attended the 1992 World Health Organization (WHO) meeting in Rome where the term was first invented. The scientists in the room were simply tired and agreed on a definition of the term because they wanted to adjourn for the night, she told NPR.

The bone density units, called "T scores," used to define osteopenia are equally as fallacious, wrote Susan Kelleher in Seattle Times: They had "boundaries so broad they include more than half of all women over 50."

Part II: Why Unnecessary Bone Scans Are Not Harmless

Martha Rosenberg's first book, "Born With a Junk Food Deficiency: How Flaks, Quacks, and Hacks Pimp the Public Health," will be published in April by Prometheus Books.