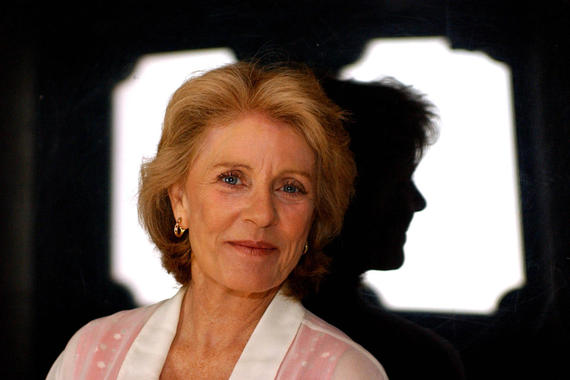 There are certain people, I should say, there are certain celebrities, who engrave themselves upon your heart. They transcend "celebrity" .Because they exude something, some inner light that manifests a deep instant connection. The minute they appear on screen your face lights up. Their presence provides great comfort, like an old and dear friend. So when you hear that they've physically have left, it really is as if you have lost a family member. That was my reaction when I woke up on March 29th, the day after my birthday and my husband told me that Patty Anna Marie Duke, had died.

I could not believe it, I could not fathom it. How was it possible? The woman who had overcome bipolar disorder and become one its greatest advocates, certainly in show business if not beyond. Took the stigma away from it and pulled it out of the closet. This lovely woman who was only a year older than my Mom. I kept praying that the news was just one of those awful, internet hoaxes, an act I personally believe should be punishable by law. But no, no, it was true, Patty was indeed gone, at 69 taken from us much too soon.

Hearing my husband utter the words "Honey, Patty died last night" really stung. He didn't have to say "Patty Duke". He knew how much I loved her, he knew one of my great aspirations and dreams was that maybe one day I would be fortunate enough to work with her. By the way, from here on out I am going to call her Anna. It was her birth name and the one she preferred.

There is some irony in Anna's untimely passing. I am reminded that it was only at the tender age of eight when, Ethel Ross, half of the despicable duo who managed Anna's career , looked squarely into those beautiful blue eyes and said

"Do you know how much money that one phrase cost me on the couch in therapy?" Anna would joke later in life.

My love affair with Anna "Patty" Duke began when I was in the fifth grade. We had to read a story called, Helen and Teacher. I became so enamored of Helen Keller and Annie Sullivan that my own teacher, Mrs. McKewen, suggested that I have my Mom rent me, The Miracle Worker. Which she did that very night. Anna's performance of Helen Keller blew me away. By the end of the film I was a sobbing mess. Then I learned that the film had been remade with Anna playing Annie Sullivan. Again, just riveted. I cannot tell you the endless late fees my mom paid Blockbuster video because I would not let her take the tape back.

Shortly thereafter, late one Friday night, I stumbled across The Patty Duke Show on Nick at Nite. Sure enough, it was the little girl from The Miracle Worker. I sat in front of our TV transfixed. At one point, I recall, turning to my mom and saying " Patty's really good but where did they find the girl whose playing Cathy?!" My mom, gently, chastised me, "Ya knuckle head, it IS the same actress! She played both parts!"

Next my Godmother surprised me with her autobiography, Call Me Anna. Which I devoured over one summer night. I was pulverized by her life. I had utter disdain for her maniacal managers who stripped her of her identity, fed her alcohol and prescription drugs and both took turns sexually molesting her. But I was so inspired by her courage.

Then the penultimate moment. I learned that Cinemax would be airing Valley of the Dolls for one day only, no repeat performances. I had to see it! One problem, it was airing at 1:35 in the afternoon on a school day! So, I did what any self-respecting thirteen year old homosexual male would do, I faked a stomachache at lunch time. Boy, did I lay it on thick! A performance that Neely O' Hara herself would have been proud of had she done it! This past December I posted that as part of my birthday wish on Anna's Facebook wall. She liked it. I hope she got a giggle out of it. We were acquainted through her Wig Master from when she did Wicked (Mark Hoyer) who now does all of my live performance wigs.

As someone who suffers from anxiety disorder and panic attacks, it was Anna's knowledge (as she also suffered from them) that helped ease my mind. She made me realize that what I suffer from is indeed real and not something to be ashamed of or as some have callously put something to just "get over!"

"Sadly, we are quick to judge, I think, something that we don't understand. "Drama Queen" is an easier fix"". Anna told a PBS interviewer in 2011, on the general public's reaction to those who suffer from panic attacks and anxiety disorder.

How wonderful that her son, Sean Astin, is taking on his mom's life work in his endeavor to establish the Patty Duke Mental Health project. Seeing to it that Anna's legacy will continue on behalf of mental illness and her star is kept shining bright. You can find out more information on the project here: https://www.crowdrise.com/patty-duke-mental-health-project

In a 2004 interview with Ryan Seacrest, Anna mentioned that she had always stayed away from having a star on the Hollywood Walk of Fame. One night after seeing her son Mackenzie in a play on Hollywood Blvd, and taking a stroll her with her (then) seven year old granddaughter, Alexandra, she noticed that the child was enamored by the stars on the sidewalks. Anna mentioned that the Hallmark Channel had offered to get her one of those stars. But "Nana" was hesitant.

"Oh, Nana, people will remember you!"

Out of the mouths of babes! Anna did indeed get her star on the walk of fame. But star or no star on any Hollywood sidewalk, one thing is certain, heaven is much brighter every night now with the spirit of Anna Marie Duke emanating from it.

Here is a video of Mackenzie Astin speaking at the memorial service for Anna earlier this month.

It was always clear from her vast body of work that Anna wanted to be remembered above all for her performances in The Miracle Worker. So I cannot think of a more fitting way to end this blog.

At the end of The Miracle Worker, Annie Sullivan takes the now tamed and enlightened Helen Keller into her arms and spells into her hand:

So Anna, Thank you for your courage, for your joy, as just one of your legions and legions of fans and admirers let me say:

"We love, you Anna. Forever and ever".

Here is the second half of Anna's poignant Memorial service including speeches and remembrances from many people including Melissa Gilbert.

I am an Author and a professional Tribute Artist who performs live as Judy Garland and forty-five other famous women.