Woodstock, NY -- Coming of age films are often stunningly boring for those who have already come of age. For them the entire genre is one deep ditch in the mind of monotony with shallow scripts crafted by comatose writers that deliver painful romps through the cinematic terrain of clichés. That's not good -- but hold it! The gray headed ones can still be swayed. They're not dead yet.

When the tale of transition from childhood to adulthood is placed in a serious cultural context, when the film conveys distinctive challenges and unique paths, when the story is told by skilled filmmakers -- the interest is back! And the gray headed ones inch forward until they're perched on the edge of their seats.

At the just concluded Woodstock Film Festival -- a film buffs pilgrimage to independent films in the fall foliage of the Catskill Mountains -- this gray haired reviewer saw two such films. Both had him perched. 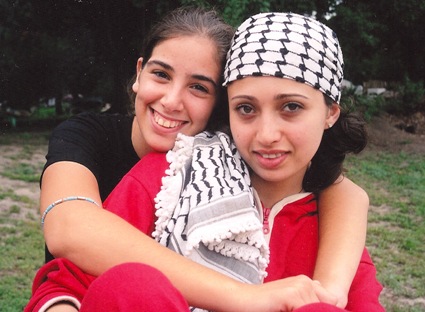 The documentary My So-Called Enemy is set in New Jersey and the Middle East. Twenty-two teenage girls -- the film follows six -- from Israel and Palestine travel to US under the auspices of "Building Bridges for Peace." The Israeli and Palestinian girls engage in intense discussions and strong arguments -- there is anger, there are tears. Yet, when the political debates are set aside, the girls go swimming, go bowling, dance, eat, eat a lot ... instead of tears there is laughter, instead of enemies they are friends.

The honest and heated conversations are to release and defuse the anger, the fun and games are to bond and create new friendships. "The other" is transformed into the human, then a friend. The girls become seeds that after returning to the volatile Israel-Palestine sprout into sturdy trees for peace. But that will not be easy.

"I am fighting for a Palestinian country," says tearful Israeli Gal, "and you (want to) kick me out (of my country)."

"When I see Jewish girls as individuals, I love them" says Palestinian Christian Inas, who lost her father in the intifada.

"I don't like the word 'peace,'" says Adi an Israeli. "I'm looking for justice and understanding, something more realistic (than peace)."

The goal is not for the girls to agree, says counselor Melodye Feldman, the founder of Building Bridges for Peace, but when they disagree to treat each other with respect, with humanness. "But camp is the easy part," she says, "going home to a divided land is the hard part."

And just what did happen when these girls returned home, home to Israel and to Palestine, home to where the entrenched hatred for "the other" is an epidemic? My So-Called Enemy records what happens. After the ten day peace camp in New Jersey, the film follows the girls for seven years. Yes, for seven years!

My So-Called Enemy is an insightful, moving, important film about not just adolescence but about the intractable Israel-Palestine conflict. Filmmaker Lisa Gossels (The Children of Chabannes) takes us behind the deep anger and the hard divisions, behind a conflict that refuses to die, where we catch a glimpse of hope. The hope that this horrible war can be worked out even when the two sides continue to disagree. This happened in New Jersey, and now it needs to happen in the Middle East. But that's the hard part. 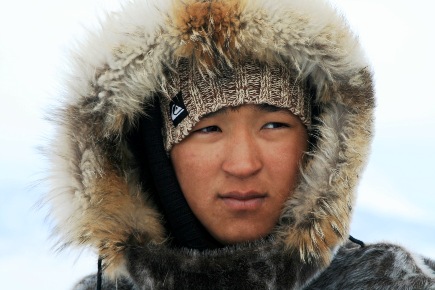 Inuk, a narrative based upon real people and set in Greenland, focuses on a 16 year old boy whose father is deceased, mother is an alcoholic, and step-father is both an alcoholic and abusive. The teenager soon runs afoul of the law and the judicial system sends him from the capital city where he was raised to a school for troubled indigenous youth in the far north -- several hundred miles above the Arctic Circle -- where his roots exist.

A "field trip" is arranged for the students, yet one quite different from those taken by high school students in the US. Riding on five dogsleds each with more than a dozen huskies, sleeping in tents on the ice, led by native hunters who resent being "babysitters," battling the bitter cold and biting wind, it's a grueling and challenging journey. To survive in this harsh desolation, the teenagers must adapt. They must acquire a different attitude and learn new skills. And they do. The hunter's stories replace the lyrics of rap-music. Inuk, the 16 year old boy who the film follows, no longer refuses to wear the polar bear skin pants. He sets aside his ipod and picks up his deceased father's dogsled whip. Inuk declares he wants to be hunter on the ice.

"The elders used to say," the school's leader narrates, "'To be yourself and to be part of world around you is the essence of a man's identity.' But what happens," she asks, "when that world has faded away?"

Yes, the ice culture of the Arctic north is receding: modern culture is encroaching and global warming is evaporating the ice. Will young Inuk return to being a modern urban dweller or become that ice hunter? Can he survive in the confusing and dangerous city, which in his heart is an alien world? Can he survive on the harsh and dangerous ice, where his roots lie? The modern world requires him to make a leap into the future while the life of the past is disappearing. Where will Inuk go? Where can he go?

Inuk is a delightful adventure with spectacular scenery -- winning the Woodstock Film Festival's cinematography award. Paced for the tempo of Greenland and its desolate landscape, in entertaining story telling fashion the film reveals an old culture under modern attack.

After the screening, I asked the filmmaker, Mike Magidson, why he chose to make this film. With a broad smile that hinted a joke was coming, he said: "I knew that I would be working with non-actors on the ice above the Arctic Circle with temperatures 30-below Celsius, so if the film turned out lousy I'd have all kinds of excuses." Magidson did not need any excuses -- not even for the non-actors. Especially the polar bear and seal hunter Ole Jørgen Hammeken as Ikuma, Gaaba Petersen as Inuk, and Rebekka Jørgensen as Aviaaja the school's principle. In fact, all the non-actors were fantastic actors.

Although worlds apart, My So-Called Enemy and Inuk both investigate adolescents fighting dislocation and the sense of rootlessness -- Israelis and Palestinians because of the war that will not end, Greenlanders because of the spread of modern culture and alienation from their native culture. For both groups there is confusion, pain, anger, a deep identity crises that racket up the normal turmoil of youth. In New Jersey a camp for conflict resolution uses discussion to expose the hostilities and then social events to bring the girls together. In the Arctic a native school and an ice trip expose the youth to the roots they so desperately need to find their way in today's world.

Both My So-Called Enemy and Inuk are journeys to deal with the pressures and dangers not only of adolescence but also of modernity: the all too prevalent destruction through war and the evaporation of culture in the name of "progress." They are extraordinary documentary films that entertain while giving us insights into what the coming of age journey is like in societies very different from our own.