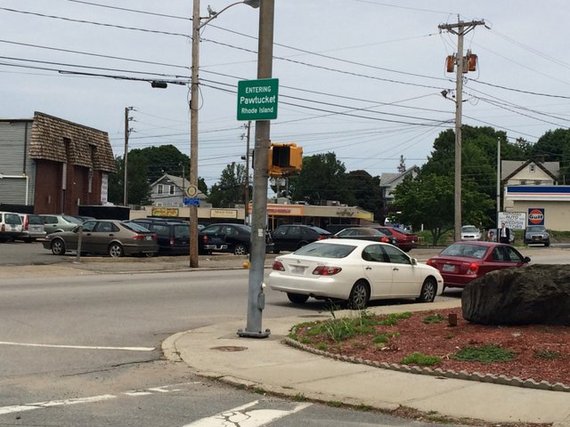 I'd assert that it's amazing how much a name can contribute to branding, but, truthfully, it's not that surprising at all. Look at what's happened over the last two or three years to the word "artisan" or its more turgid adjective counterpart, "artisanal". Did anyone even use the word as recently as 2009? The application of a label -- either for the first time or overriding a previous appellation -- can set in rapidly and proliferate mimetically: whenever enough listeners respond favorably to a name, they begin to use it themselves. Sometimes the name is a sine qua non when it comes to branding; it is the brand.

This characteristic applies just as strongly to settlements, which often owe their names to their founder -- perhaps an entrepreneur who effectively lured a colony of workers to a place to support his or her fledgling industry. After the widespread establishment of cadastral records, a community's name just as easily might come from a land developer, a title that synchronizes with his or her vision on what prospective residents might find appealing. Shady Acres. Emerald Highlands. Riverside. Levittown. And how different is this approach from any other entrepreneur, hoping to lure new workers to invest in a speculative industry -- in the case of subdivisions, an industry for living?

But the original names don't always stick around; they wane and wax. It's only a matter of time before "artisanal" seems as stale to the rest of America as it already does to me. Trendy catchphrases are nearly always ephemeral. But sometimes it happens with place names too, even if the physical places that they identify seem fairly static. In Brooklyn, a formerly seedy, nondescript area Down Under the Manhattan Bridge Overpass eventually earned the title "DUMBO", though locals apparently co-opted the appellation decades ago, with the hopes that the goofy acronym was ugly enough to scare away developers. An anti-brand. (It didn't, and developers have capitalized on the soaring land values in Dumbo over the last 15 years.) Meanwhile, the inverse happened in my home city of Indianapolis: in an attempt to foster middle-class demand in a formerly impoverished, crime-ridden area, the City's partnership with HUD in a redevelopment grant elicited the name Fall Creek Place for an area locals previously referred to as Dodge City.

Neither of these two examples are likely 100 percent grassroots; after all, they didn't just evolve incrementally from happy accidents. The fact that I was able to drum up two URLs that explicitly chronicle these naming strategies proves that both involved some deliberation. But what really is homespun these days? If we dug around enough, I'm sure we could find the marketing boardroom meeting minutes where they shook hands to seal the deal on making "artisan" the next buzzword.

But I doubt an online record exists that explores the naming deal that took place between the adjacent cities of Providence and Pawtucket in Rhode Island. 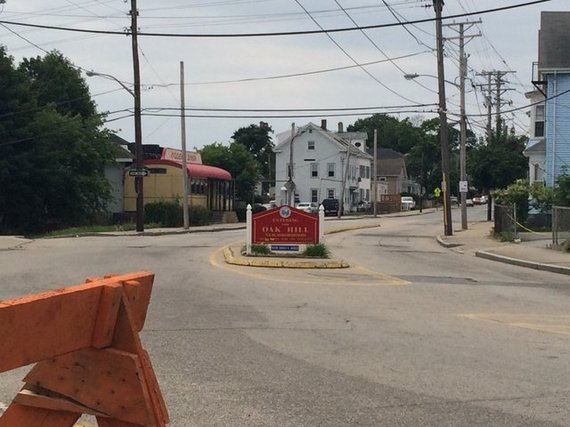 My apologies for the blurriness, but unfortunately Google Street View isn't any better. The red sign, where George Street meets East Avenue, says "Entering the Oak Hill Neighborhood -- Where People Make the Difference". Oak Hill is the southernmost neighborhood in the city of Pawtucket, and while much of the state's other "P" city is resolutely blue-collar, Oak Hill is comparably tony. 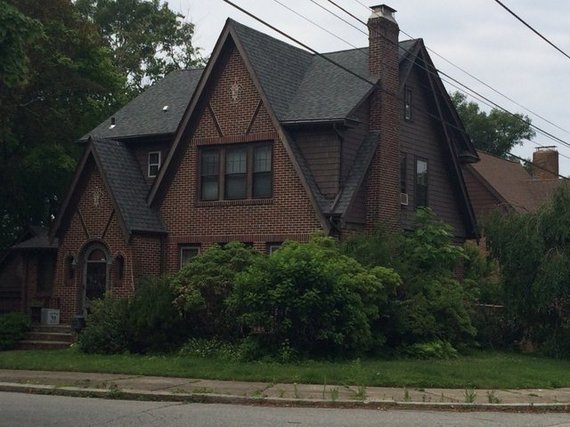 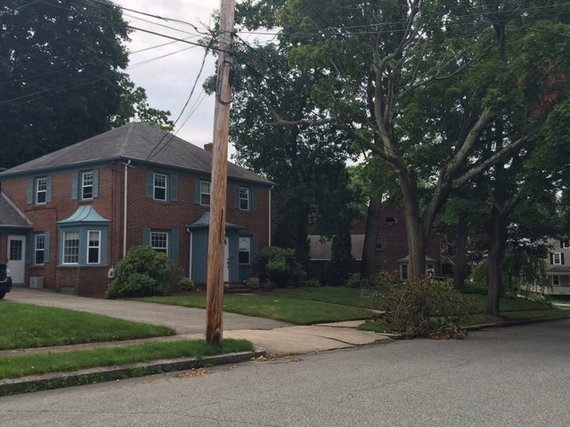 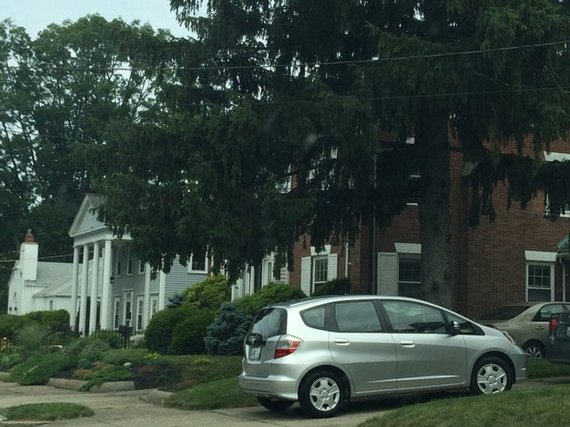 Sizable pre-war single-family homes front tree-lined streets, all of which appear as well-maintained as the impeccable landscaping. But Oak Hill isn't just stately residences: its central artery (East Avenue) features a number of local businesses, all fully walkable from the homes featured in the photos above. 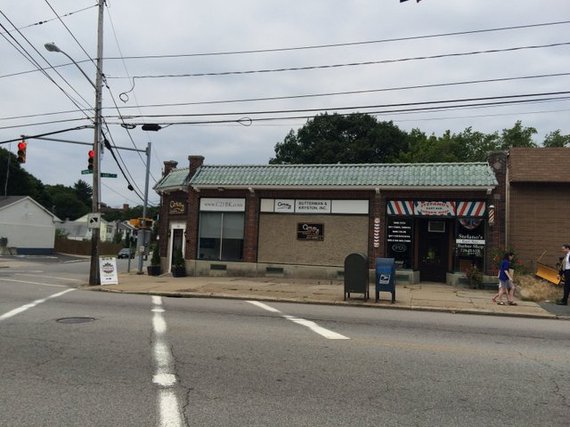 While some of the storefronts directly face the street, such as the photo above, the most prominent retail hub in Oak Hill is an old strip mall, called Blackstone Place. It's nothing much to look at, lacking any real tree islands in the parking lot. But it also ostensibly predates the era when parking became a strip mall's primary selling point. And this one seems to have attracted some fashionable local businesses (vegan bakery, upscale Indian), along with the national brands like Rite-Aid and Dunkin Donuts. 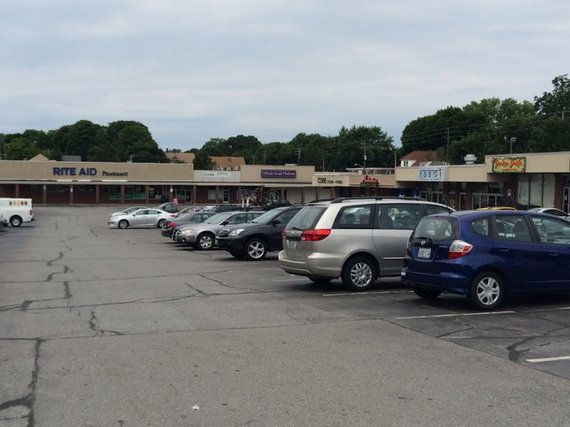 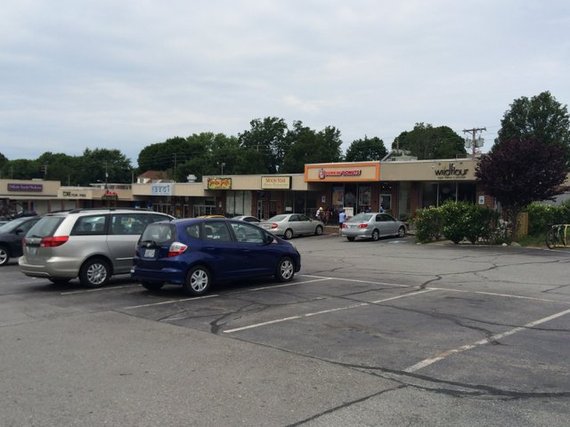 And, auto-oriented though Blackstone Place may be, it's clear that people still feel comfortable walking to it.

Perhaps most importantly, though, this shopping district within Pawtucket's Oak Hill is also just a block north of the municipal boundary, linking the neighborhood with Providence, where the commercial district continues in the fashionable Hope neighborhood (often also called Summit). 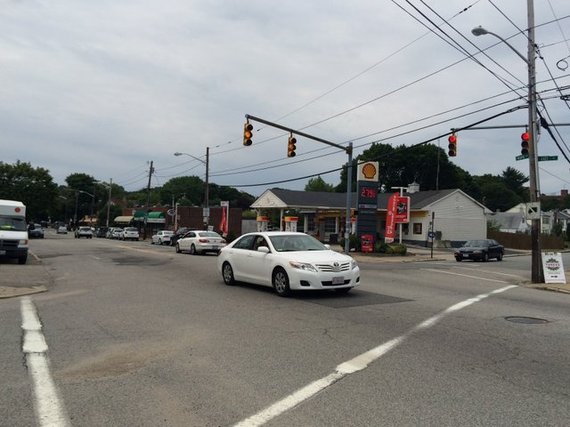 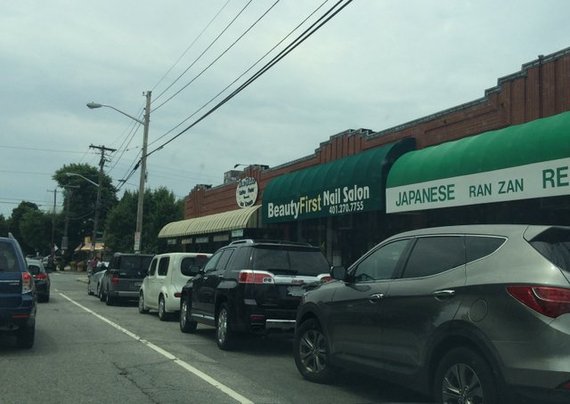 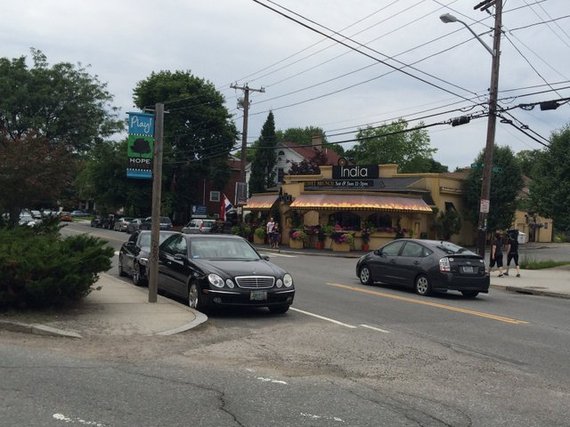 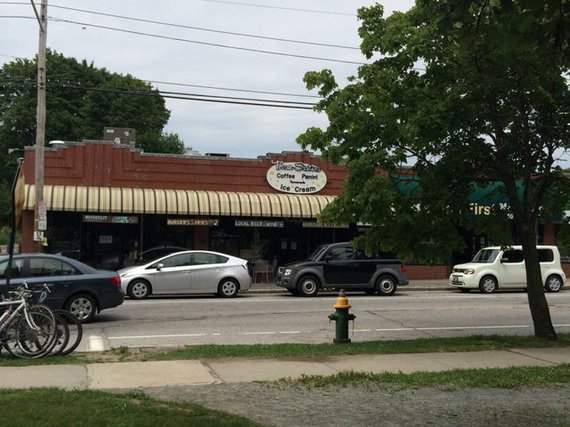 The road name changes from East Avenue to Hope Street, but otherwise the character is largely the same on both sides of the Providence/Pawtucket line. Homes of the same age show the same level of maintenance. 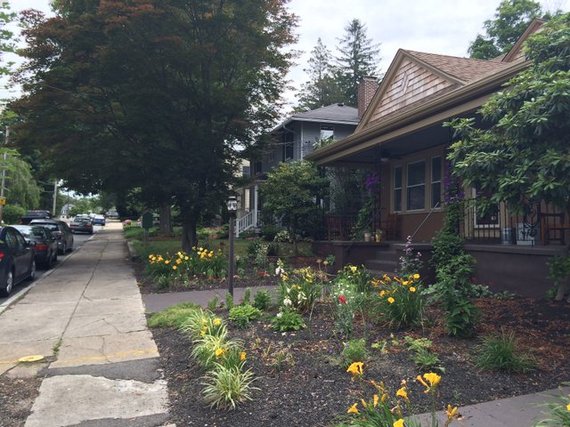 The pedestrian-scaled activity seems to reach its apex (at least on a warm summer day like the ones in these photographs) at the thriving Lippitt Memorial Park. 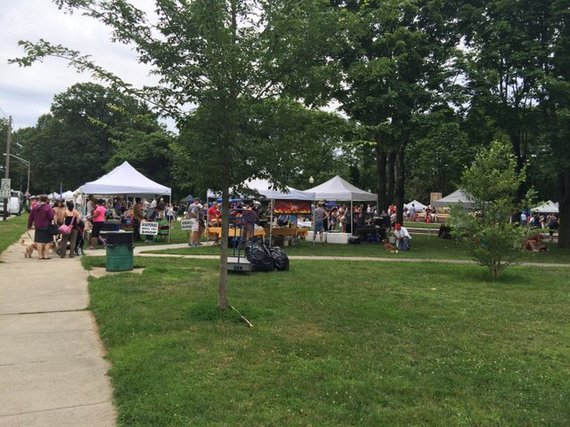 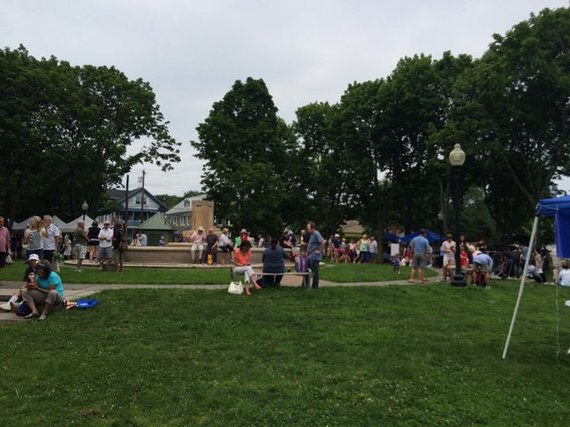 While it obviously doesn't feature a food festival every day, it's obviously a heavily used urban green space, at the absolute northern edge of Providence.

These photos demonstrate two discrete municipalities uniting under a shared demographic and the lifestyle to which it caters. Nothing wrong with that. But it's telling how much the Oak Hill side strives to downplay the fact that it's in Pawtucket. Here's the sign traveling northward on Hope Street, as one leaves Providence. 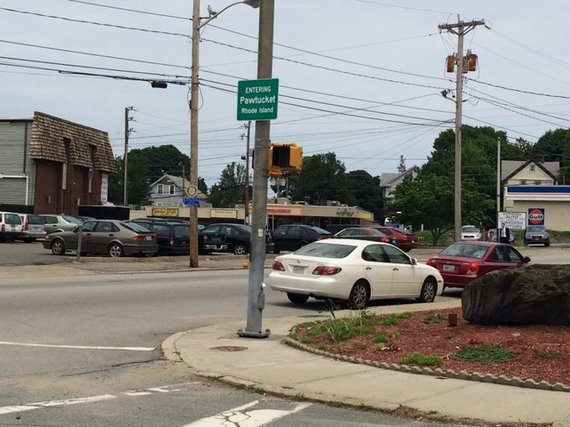 Barely noticeable. I had already collected firsthand evidence from friends in the area that Oak Hill perceives of itself as "Oak Hill" first, latching onto the fact that it is of a significantly higher income than most of Pawtucket and much more in keeping with Hope/Summit in Providence, which is also a higher income than most of the rest of its city. And remember that big red sign announcing Oak Hill? It didn't even mention Pawtucket. But the flip side of that exact same sign tells a different story: 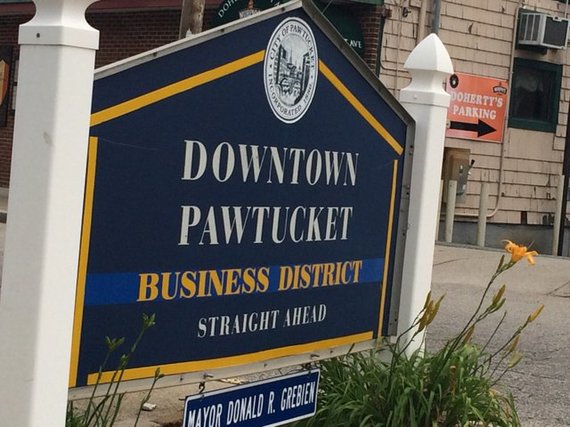 Only as one is driving northward out of the Oak Hill neighborhood does it acknowledge Pawtucket by announcing Pawtucket's downtown, which, as I covered here a few months ago, has seen better days. But a traveler could just as easily surmise that he/she is just now entering Pawtucket, even though up to this point everything nearby was part of Pawtucket's Oak Hill.

The residents of Oak Hill may still claim a Pawtucket postal address, but it's apparent that's not the brand they seek for themselves. (Or at least whoever made the decision to furnish a certain intersection with a misleading sign.) The actions here aren't any more malicious than what we witnessed in Dumbo or Fall Creek Place, but they all reflect a tenor of snobbery, which, though subtle (as snobbery often is) unambiguously demonstrate an aversion toward a certain socioeconomic other. Naming in each case represents a collective goal to steer investment in a certain direction -- a hallmark of any true branding activity. But not all branding has to thumb its nose at people who don't fit a certain earning potential. Just look at this innocuous food truck at the park on the Providence/Pawtucket boundary: 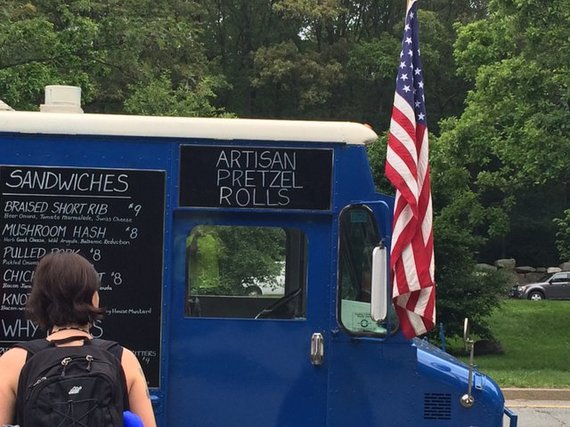 Then again, the artisans who spent weeks crafting these pretzel rolls probably weren't trying to accommodate the proletariat.

Similar reflections on Rhode Island -- and the rest of this hilarious county -- can be found on American Dirt, the author's blog. All photos taken by the author.