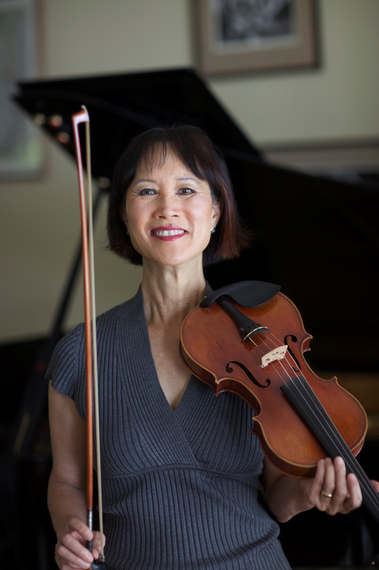 Tess Gerritsen was a physician and Board-certified internist before turning her talents to writing. The Rizzoli and Isles series, featuring a homicide detective and medical examiner, propelled Tess to the status of an internationally bestselling author; and was the foundation for the popular television series of the same name.

Tess has written standalone medical and crime thrillers; and her books have been published in 40 countries. Playing with Fire, a standalone novel, draws its drama from Tess's passion as an accomplished musician.

Playing with Fire is a beautifully written novel of psychological suspense. It centers on violinist, Julia Ardsnell, who while in Rome, discovers an obscure musical score in an antique music shop. The piece, a waltz, is entitled Incendio. Returning to Boston, Julia discovers the music has a terrifying effect on her young daughter, Lily. Julia is determined to track down the music score's origins. She travels to Venice where she uncovers a secret dating back to World War II, one involving a powerful family intent on preventing Julia from bringing the truth to light.

I understand Playing with Fire was born out of a true experience while you were traveling in Italy. Tell us about that.
I was in Venice for my birthday, and had a nightmare. I dreamt I was playing my violin while a baby sat next to me. While I was playing this dark and disturbing music, the baby's eyes glowed red and she turned into a monster. I woke up questioning what this was about. I knew there was a story there: something about the power of music.

We talk about music soothing the savage beast, but what if it awakens the beast? I walked around Venice and had no idea where the story would go, but kept thinking about it. I wandered into the old Jewish quarter, and saw the memorials to the two-hundred forty six Venetian Jews who were deported during World War II.

And then, the whole story came to me. This had never before happened, that a story so full-blown and complete, came to me in a dream.

The novel's descriptions of the waltz, Incendio, are exquisite. Tell us how writing about the waltz developed into your bringing that waltz to life.
The waltz is such a central part of the story. I wondered what kind of music would awaken the beast in a child. As a novelist, I described it fictionally. It was a beautiful waltz: very sad, but it began to change midway through the piece, and became very disturbing.

Because of my background in music, I knew exactly what makes music disturbing. Basically, it's dissonance. Certain chords strike our ears in a way that makes us uncomfortable. I described those dissonant chords, and remembered something from my own musical education--the concept of the Devil's chord. It was forbidden in the medieval church because it was so disturbing.

In the process of writing the book, the music must have seeped into my subconscious becasue I woke up one morning and the waltz's melody was playing in my head. What's so strange is both the story and the music came to me in dreams. I composed the music over about six weeks. It's exactly as described in the book: it starts off sweetly mournful, then grows more disturbing.

I didn't know, in addition to being a writer, you're also a composer.
I didn't know it either. (Laughter). I'm an amateur musician--violin and piano, but I have enough of a background to be able to compose what I heard in my head. I composed a waltz for my son's wedding. Most of my musical experiences have been with Celtic music, but I've studied enough classical and Gypsy music, to understand what would work in that particular genre of music.

The prose in Playing with Fire is beautiful and has a "literary" quality. How do you feel being labelled a genre writer?
I think how you're labelled depends on what voice you're using for your story. For the most part, I am a genre writer. I accept that label because that's what I write--crime. Crime novels can be literary, but they're still crime. There's a large readership for genre fiction. I'm certainly not going to turn up my nose at readers. (Laughter). You know, it doesn't really matter what the label is. I think all that matters is that you touch people. It's important that what you write makes a difference to the readers.

As a physician practicing internal medicine, how did you make the transition to writing novels?
Maternity leave. (More laughter). I always knew I wanted to be a writer. I went to medical school because my parents were very conservative about what their children would do for a living. That's why so many of us Asian-American kids end up in medical school. So, I became a doctor, but when I went on maternity leave, I went back to writing. By the time I'd sold my first book, I knew that was what I really should be doing.

Was there a time when you were both practicing medicine and writing successfully?
Yes. I was working part time, for perhaps five hours a day. I'd go home and when my kids were put to bed, I would work at night.

Speaking of nighttime, what, if anything, keeps you awake at night?
The same anxieties most of us have, which are really about the people you care about. I worry about my children, and about my grandchild. The curse of being a writer--or of being a mother--is you always imagine the worst thing that can happen. You're always thinking of worse-case scenarios.

What's the most important lesson you ever learned about writing?
To be accepting of a bad first draft. (More laughter). I think I've learned you can't be perfect. I've learned to accept that the first draft of a novel is going to be horrible. I've also learned not to edit while working on that first draft. I just let it pour out and keep going forward.

What do you love about the writing life?
I love being able to indulge my curiosity. Many of my stories come about because I want to know more about a particular subject. I get a chance, for a while, to be somebody else. I've written about the NASA space program; I spent two years pretending I was an astronaut. I wrote a book about Egyptology and got to explore archaeology. Writing Playing with Fire, I got to explore World War II Italy.

Do you ever find yourself procrastinating?
All the time. It's human nature. I write and stick to my schedule because I have a contract. If I didn't have a book under contract, I would take my time. You know, there are so many distractions for a novelist, especially for those of us who are pulled in many directions by multiple passions. I could spend an entire year doing nothing but learning fiddle tunes.

Have you ever suffered from writer's block?
Yes, with almost every book.

But, Playing with Fire didn't give me writer's block.

Because I write crime fiction, I start out with an idea that excites me. But I don't know where it's going. Most of the time, I don't even know who the bad guy is. About half way through the first draft, I have to stop writing because I don't know what will happen next. I might call it plot block as opposed to writer's block. My strategy for getting past that point is going for a long walk; or lying on the couch and staring at the ceiling. But, the number one thing that helps is driving the car. I can work out a lot of stuff while I'm behind the wheel, by myself, on a long, boring drive. I guess it has to do with where your brain is when you're semi-focused on something else. It allows my subconscious to work on the plot issues. It's almost like being in a dream-state. It's a very creative place for my imagination to be stirred.

What advice would you give to writers starting out?
Beyond allowing one's self to have a bad first draft, and not editing that draft, persistence is the key. A writer can't give up just because the book keeps getting turned down by agents and publishers. It took me three books to get something sold.

Also, I can't start a book until I hear a character talking to me; until I hear a voice. I get a feeling for a book by the way that voice sounds. If you get that voice inside your head, it makes the writing so much easier.

And finally, I always say the best books start with the most emotional ideas. So, I wait for what I call the punch in the gut. I wait for that idea that makes me think, 'What happens next?' It can happen anywhere at any time. Perhaps, I'll overhear a conversation that will strike me as being the kernel of a great idea for a novel.

You're hosting a dinner party and can invite any five people, living or dead, from any walk of life. Who would they be?
I know I would ask Cleopatra. She's a fascinating character in history. We don't know how much about these legendary people is true, but Cleopatra could purportedly twist men around with her intellect. You know who else I'd invite? Margaret Meade. And then, I'd ask Amelia Earhart. I'm really interested in accomplished and interesting women. (Laughter). The funny thing is I don't find writers all that interesting. We writers live in such a world of imagination, we're too busy to go out and do things ourselves. I'm most interested in people who've done things. I would also like to have the young King Tut at the dinner. And last, but certainly not least, I'd invite Genghis Khan.