I know what you're saying to yourself: "Self, now that podcasts have been a thing for more than a decade, isn't it time that Jeopardy phenom have his own show?"

Kicking off this week is Runaway Brains, a comedy mini-series of a podcast dreamed up (as well as written and produced exclusively for Howl.fm) by Rob Kutner, a top-flight comedy writer from Conan, The Daily Show and more. 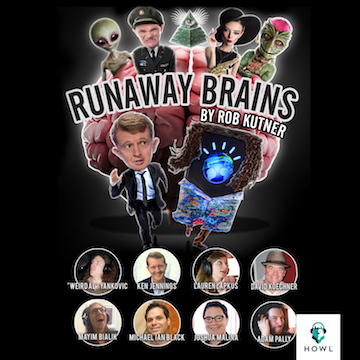 The aforementioned Jennings has been tapped to star as...himself. Or, more accurately, a version of himself who is forced to team up with a supercomputer named Watson, voiced by Weird Al Yankovic. As this opening episode ("Final Jeopardy") kicks off the mini-series, Jennings and Watson are pitted against each other on the TV game show Jeopardy, only to find themselves reluctant allies on the run when its discovered that the limbless robot (who must be carried in Jenning's giant nerd backpack) is suspected of harboring nefarious secrets in his onboard hard drive.

Being chased by government agencies and others, the duo is determined to elude capture, while trying to find someone canny enough to dredge the illicit intellectual cargo out of Watson's database.

Creator Kutner promises that there are guest voices onboard through the run of the series, including folks like Michael Ian Black, David Koechner, Mayim Balik, and more. But the real treat is the interplay between Jennings and Yankovic.

Oh, hell, let's be honest -- this is Ken Jennings like you've never heard him before!

(Even though this mini-series is featured on subscription only Howl.fm, you can catch the first episode as an Earwolf Presents installment for free!)

Podcasts I'm also listening to this week: The Nerdist -- Jodie Foster, and We Got This -- Calling Or Texting, with Paul F. Tompkins

The Runaway Brains review and other podcasts mentioned originally posted as part of This Week In Comedy Podcasts on Splitsider.com.

Marc Hershon is the host and executive producer of Succotash, The Comedy Podcast Podcast, featuring clips from comedy podcasts from across the Internet as well as interviews with podcasters, comedians, and assorted show biz folk. You can talk to him about comedy podcasts live for up to five minutes -- find him @hershco via the SpareMin app!