World-renowned artists, 250 galleries, museum curators and directors, highbrow collectors, celebrities, and more than 50,000 fans of modern and contemporary art will gather in Miami Beach this week for the annual Art Basel. But art enthusiasts aren't the only ones gathering, the event attracts a huge wealthy crowd, so it makes a lot of sense that the political candidates are taking center stage. A fundraiser for Hillary Clinton's campaign will be held in Miami Beach on December 1, and on December 2-former Miami mayor Manny Diaz, Richard Florida and I will host a fundraiser for Governor O'Malley's presidential campaign.

Creativity and art, both recognize, are intimately connected to prosperity. "If we want to give our children the type of future they deserve, and if we care about strengthening our American workforce so we can compete to win, we need to make choices that focus on both the right and the left parts of the human brain," O'Malley has noted.

A community united by the ideals of compassion and creativity has incredible power. Art of all kinds -- music, literature, traditional arts, visual arts -- can lift a community. Art can inspire an individual to find an avenue of expression that opens new possibilities for creativity and innovation.

Richard Florida and Martin O'Malley have tirelessly advocated for cities for decades -- Florida from his platform as an academic and the bestselling author of The Rise of the Creative Class and O'Malley as a two-term Mayor of the city of Baltimore, a two-term governor of Maryland, and a Democratic candidate for President of the United States.

The two are accomplished musicians as well; O'Malley as the front man for the Irish folk rock band O'Malley's March, and Florida as a rock and roll guitar player ("strange as it may seem," he told an interviewer not long ago, "I still think of myself as more of a guitarist than a researcher. It was my identity as a young boy.") Attendees will have the opportunity not just to meet them and hear them share their ideas about urbanism, creativity, and economic growth, but to hear them make music together; the two will perform two songs. 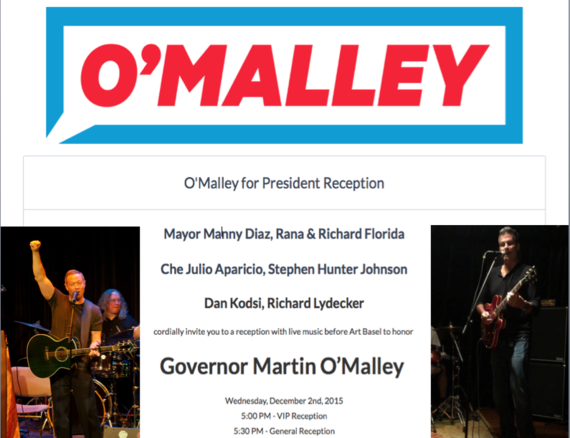 "I got to know Governor O'Malley when I was mayor of Miami and he was mayor of Baltimore, and I am confident that he is the best shot our party has to keep the White House," Diaz wrote when the event was announced. "We need your help to get him there."
To attend the event, email Annie Osborne at aosborne@martinomalley.com