The Internet, it seems, is always full of surprises.

According to a report released on April 30 by security software firm Symantec, religious and ideological websites are riskier to visit than adult and pornographic websites.

In this latest report, Symantec's analysis found that religious sites had more than triple the average number of threats per infected site than pornographic sites; an average of 115 threats had been found on religious sites while an average of 25 had been found on pornographic sites. According to the report, this may be the case because "pornographic website owners already make money from the Internet and, as a result, have a vested interest in keeping their sites malware-free -– it’s not good for repeat business." 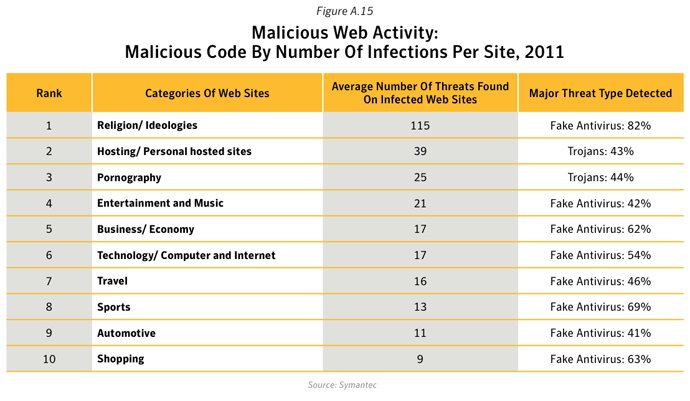 In addition, Symantec ranked sites hosting pornographic content at the very bottom of its list of the Internet's most dangerous website categories, many of which seem to describe sites users might visit regularly. Though considering that Symantec found 61 percent of sites hosting malware to be "regular websites" that have been compromised and infected with malicious code, it's not so surprising that some of the top-ranking site categories look familiar. 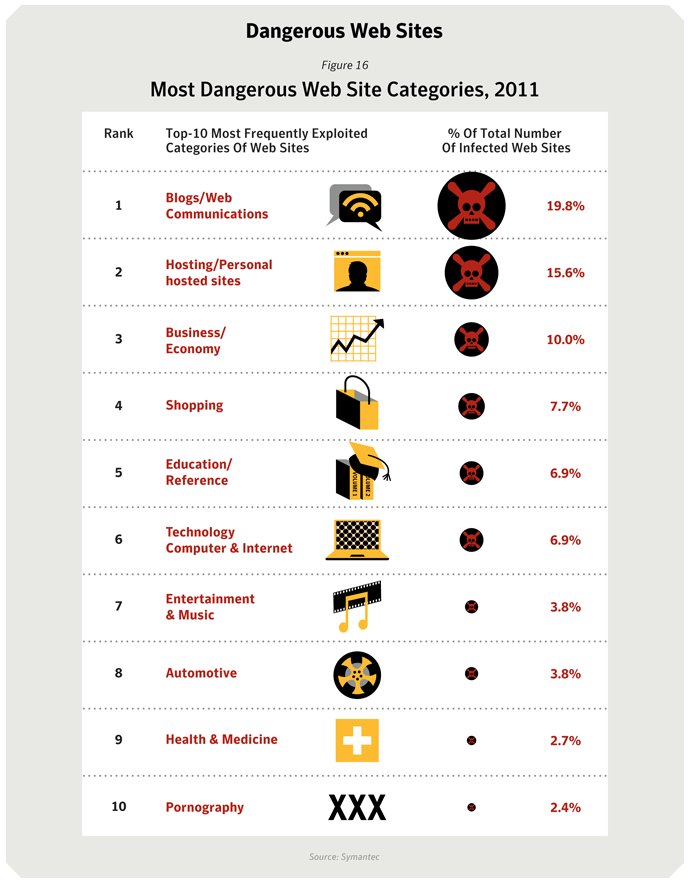 While religious sites topped Symantec's chart showing the average number of infections per site, these sites are nowhere to be found on the company's list of the most dangerous categories. The Wall Street Journal does point out that there are many more pornographic sites than religious sites on the web, a fact that might have affected these averages. And PCWorld cautions that Internet security reports from companies like Symantec, which sells anti-virus software, should be taken "with a pinch of salt."

Regardless, with malicious attacks increasing dramatically -- Symantec found an 81 percent increase in attacks in the past year alone -- it might be better for users to be safe (and smart) on the web than sorry by avoiding shady-looking sites and being careful with what they click.

What do you think of Symantec's findings? Do you have any tips on how to avoid website malware? Share your thoughts with us in the comments below!

Take a look through our slideshow (below) to see the countries where the bulk of the world's spam come from, according to a recent report by Sophos.