[VIDEO] Clyfford Still: A Life in Paintings source: clyffordstillmuseum.org Produced and directed by A bark K Productions and the Milkhaus.

"I give and bequeath all the remaining works of art executed by me in my collection to an American city that will agree to build or assign and maintain permanent quarters exclusively for these works of art and assure their physical survival with the explicit requirement that none of these works of art will be sold, given, or exchanged but are to be retained in the place described above exclusively assigned to them in perpetuity for exhibition and study." --Clyfford Still

In 2004, Denver became the city visionary enough to make this committment. When the Clyfford Still Museum opens later this year 825 paintings and 1575 works on paper by Still will be available to the public for the first time.

Still's paintings left me awestruck at first encounter and remain a touchstone for me many years later. The beautifully shot video above features painter Bill Jensen discussing his own discovery of Clyfford Still's work as the camera slowly pans over the surfaces of Still's paintings.

Still's reputation has suffered predictably due to the rigid control he maintained over the exhibition and collection of his work. He's often seen as a challenging artist who was arrogant and dictatorial, but this characterization will vanish the day the museum opens its doors. Still's efforts will be finally be recognized as sacrifices. He cared about his work and refused financial reward and art world honors to preserve his artistic vision for future generations.

"You can't go to a Clyfford Still painting expecting to see something, and to look for something, because it's not going to be there. But if you go to it expecting nothing and are open to something - you might have an incredible experience."

The humanity in Still's paintings is elemental, not descriptive. The hard-working figures of his early paintings were consumed by the raw, celebratory, human act of creation.  These paintings are meant to be felt as much as seen, and Jensen correctly cautions against our contemporary bias toward the visual in painting.

"It felt like I was struck by lightning. My heart started to pound, something was picking me up by the back of the neck... There's no images in it. There was just paint, with a palette knife, on fabric. And I thought how could this happen? How could this experience, that I was having, come from just material..."

Brett Baker is a painter and the editor of painters-table.com 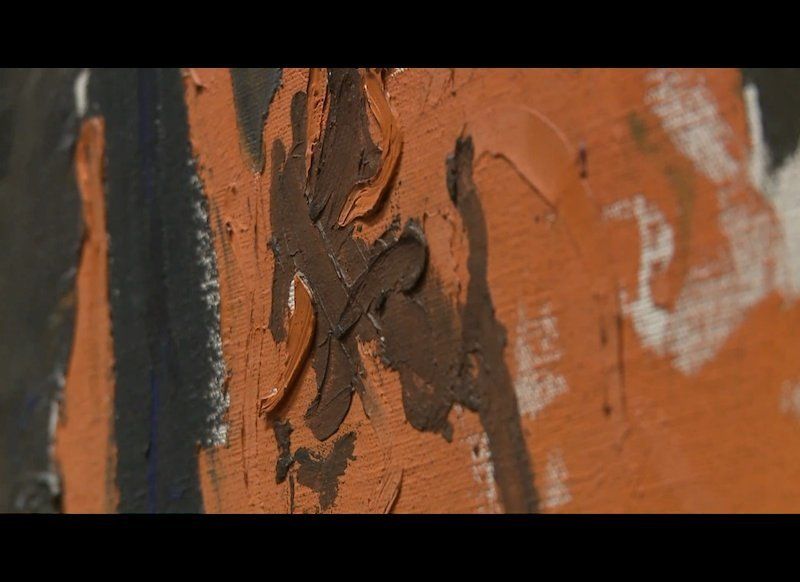 1 / 5
Surface of a Clyfford Still painting
Film still from <strong>Clyfford Still: A Life in Paintings</strong>, an upcoming documentary on Clyfford Still, produced and directed by A bark K Productions and the Milkhaus.