Enrique Chagoya's "The Misadventures of the Romantic Cannibals" has been on display at the Loveland Museum Gallery since September 11, 2010. Before that, it spent four months at the Museum of Contemporary Art/Denver from February 3- June 28, 2009. There are no media records of any complaints during that "Shark's Ink" exhibition. But now that we are in the final month leading up to a highly contested mid-term election, and in spite of the fact that more than 600 people have visited the Loveland Museum without issue, the media has latched on to Loveland City Councilor Daryle Klassen taking offense to Chagoya's political, social, and religious satire. An issue that the city council voted 6-3 not to take up in session has been blown out of proportion by the wildfire media and political blogosphere. "Jesus defiled." "Smut." "Pornography." 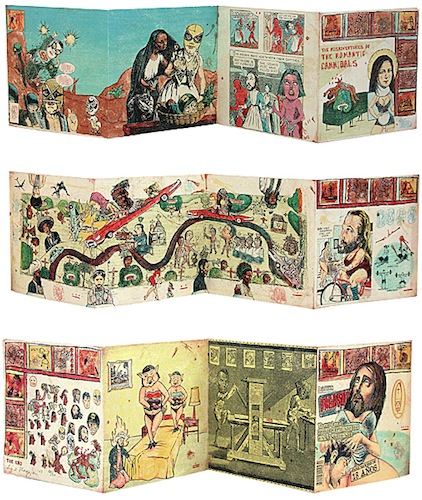 The controversial artwork is part of a twelve panel, accordion folded, 90" long frieze, divided into three section. It is a lithograph and woodcut print. One of the twelve, 7 1/2" x 7 1/2" panels, depicts Jesus riding a bicycle. But in another panel Jesus appears as a woman wearing a dress. Hanging above him/her is the word "ORGASM" and there is another figure kissing or licking the thigh of the female form. Reading from right to left as the codex is supposed to be read the following panel depicts George Washington and Abraham Lincoln printing erotic images in the green shade of US currency. The rest of the codex is illustrated with comic book characters, religious iconography and imagery, appropriated engravings, Mexican erotica, ethnic stereotypes, Mayan symbols and figures, automobiles, airplanes, and book excerpts. Chagoya intentionally places the religious iconography in contradictory, unexpected and sometimes controversial contexts.

"...My codex books are based on the idea that history is told by those who win wars. Previous historic accounts are erased, destroyed or buried in oblivion. A new official story is invented in order to justify the new reality of events. Cultures are transformed and often completely destroyed by conquering ones. The world is endlessly re-mapped and re-named, with new rules and rulers in recurrent holocausts. New "world orders" come and go in the middle of ideological frenzy."

Catholic priests destroyed all but about 22 pre-Columbian books. Chagoya uses the same bark paper -- amate -- used in the ancient codex books that were destroyed. Without the actual historic records, history becomes an ideological construction. Chagoya decided to invent his own account of the many possible stories ranging from Cortez to U.S. Border patrol utilizing his own visual language. In this sense, Chagoya is no different than Glenn Beck or Sarah Palin, who both create their own imagined history told in their own unique language -- tears and youbetcha!

The right is turning this into a political action issue for the upcoming election. The museum, which was established via generous personal gift and endowment, but is funded partially by the city, is being picketed and most of those railing in the blogosphere have never even seen the artwork.

So, before too many more conservative heads explode, let's pause and consider a few important facts.

Councilor Klassen was offended by "The Misadventures of the Romantic Cannibals." He called the work "smut" and said "It is pornography, and that's not what our community is about."

Second, Loveland city attorney, John Duval provided the police chief and council with a written opinion that the artwork did not meet the obscenity criteria specified in city ordinance.

Obscene material is defined as: "anything tangible that is capable of being used or adapted to arouse interest (that) ... The average person, applying contemporary community standards, would find that taken as a whole, appeals to the prurient interest in sex; depicts or describes patently offensive representations or descriptions of ultimate sex acts, normal or perverted, actual or simulated, including sexual intercourse, sodomy, and sexual bestiality, or patently offensive representations or descriptions of masturbation, excretory functions, sadism, masochism, lewd exhibition of the genitals, the male or female genitals in a state of sexual stimulation or arousal, or covered male genitals in a discernibly turgid state; and taken as a whole, lacks serious literary, artistic, political, or scientific value."

"My intentions are not to offend anybody," Chagoya told the Associated Press. "The main intention of my work is to express my personal concerns about religious institutions, not about the actual religious beliefs, which I respect."

Chagoya said the part of his work that critics find objectionable is part of his statement on problems he sees with religious institutions, including the sex-abuse scandal in the Roman Catholic church.

"I really respect people's beliefs," Chagoya said. "I just hope they respect mine."


Third, respect. Yes. That is what seems to be missing from the conversation. We're all for freedom of speech as long as we can say what we want, but not if what someone else says offends us. The first amendment protects Chagoya and it protects Klassen.
We may not like it all the time, but we sure as hell better value it and protect it.


It seems these days that the extremes of both political parties would like to have the government control thought, but that is anti-American.

The Catholic League has jumped on board and their president Bill Donohue, who once told the artist Cosimo Cavallaro live on CNN: "you're lucky I'm not like the Taliban, because you would lose more than your head," is now writing to Governor Ritter and the Colorado State Legislature asking them to justify the use of tax-supported dollars to fund anti-Christian hate speech.

I don't see how Jesus having an orgasm is anti-Christian hate speech. I really don't. Jesus' sex life was not covered by the apostles or written about in any texts left behind, at least not those in the so-called canon, but that's biblical history and if you want to know more go read some books by Bart Ehrman and Elaine Pagels. It appears, Donohue is taking issue with the fact that the Loveland Museum Gallery received $8,500 in grant dollars from the Colorado Creative Industries Division. However, if Donohue had done his homework he would realize that the money they received from the state supports only the "Threads to China" two week event that will celebrate Chinese art, dance, music, history and culture. None of those state dollars went to support the Shark's Ink exhibit. The exhibit is primarily funded through private donations.

And let's not get all Giuliani over this. Remember, back in 1999 when the New York Mayor managed to get the US House of Representatives to pass a nonbinding resolution ending federal funding for the Brooklyn Museum of Art because they displayed Chris Ofili's "The Holy Virgin Mary," a painting that is propped up on Elephant Dung and features Cherubim and Serafim made from that same dung. Giuliani famously declared: "You don't have a right to government subsidy for desecrating somebody else's religion, and therefore we will do everything that we can to remove funding for the Brooklyn Museum until the director comes to his senses and realizes that if you are a government-subsidized enterprise, then you can't do things that desecrate the most personal and deeply held views of people in society."

The BMA sued and Giuliani lost because the first amendment does give us the right, with or without governmental subsidy, to speak freely, even it that speech is desecrating to someone else and their religion.