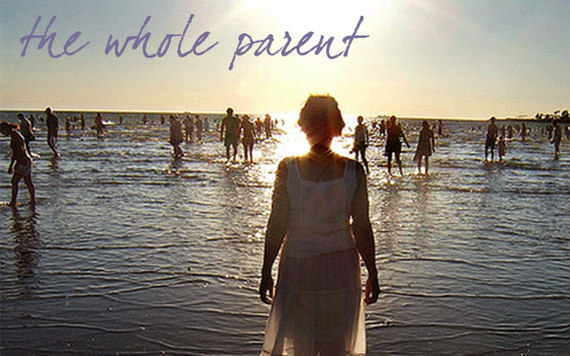 I haven't always been able to bless my ex-wife. And for times in our marriage neither of us were blessing anyone. It was hard. We tried. We worked at it. We raised kids and grew together and then apart in the process. But we never stopped trying. And I can see that we are still trying today.

I know that my ex-partner is doing the best she can under the circumstances. She always has. And though we have both had periods of struggle and doubt, we seem to be on the upswing of our co-parenting transition. I do believe that there is nothing she wouldn't do to make our kid's lives better. And I have to believe that she is always looking out for their best interest, even when I can't see it.

Somedays, I pine for being a core family again. Somedays, I look back and wonder what I could've, we could've, done to preserve the respect and love that we once had. And other days I can get so mad, wishing things were different, right now. Wishing I had the next relationship under way, like she does. But that's not what this is about.

This is about our kids. Two wonderful kids. The supreme focus of my life. And there is nothing I wouldn't do for them. To keep them safe, to protect them from unnecessary drama and hurt, to help them grow into strong independent adults. And I have to know that she has the same intention in mind, even when I think things aren't going as they should. It's okay. We still have our differences. And my "way" is not the right way, it's just my way. She has her own connection with the kids. She has her own path. And now we no longer share that path.

Communication is the key. The less we communicate... The more we communicate... It can be hard. And it is often the cause for friction in this co-parenting dance. So we need to take it more carefully. Answer with some thought to how the other person may react. Breathe when we are upset and want to react. It is never a good idea to fire back with anger. Never.

My anger is my own. My ex-wife does not deserve any of it. (Man that is even hard to say.) But it's true. We tried, we negotiated a truce and separation, and now we are separate countries with shared resources. We still operate with some of the same interdependent budgets, but we've got a new autonomy. And what makes me angry is mainly my own unmet expectations. This is not the way I wanted it to work out. But guess what? It's not the way she wanted it either. So we're even. And we're in this together.

Anger is a funny beast. At first I was afraid to express my anger. And I was almost a pacifist. But pacifists get run over. And over time I learned to speak up for my own needs. And indeed, I got mad as we entered the late stages of our marriage, when things were not going well, I spoke up. And again, today, I can feel my anger, but I can use it to change things about MY life and not hers. And anger is not an influencer for her, it's only an irritant.

It's ironic, that when she's frustrated with me, I can tell. And I sort of take offense. AND... I'd like to respond in-kind. But I've learned, that I get NO RESULTS and NO SATISFACTION from being an asshole. In fact, being angry back at her, usually causes me to feel sad. That is not to say I should swallow my anger. This is how I gained 15 pounds during the height of our dysfunction. But I should own my anger. It is mine.

Anger is energy. Learn to deal with it and channel it towards something you want. Any anger directed back at your ex is anger that will return to you ten-fold when you are in dire need of support.

Anger today is a motivating force for me. I can be angry at my ex-wife, I can be angry at the economy, angry at the slow-moving car in front of me, there are plenty of things to get angry about. And keeping it inside is not the healthy answer, so what is the way through the anger? For me, anger is energy. When I am angry, I can tap that charge and redirect it towards something constructive or creative. It's one of the reasons writing has become such a release. It's important not to bury it or squelch it. Anger is power, use it, but use it towards something you want.

As a single parent, there are many new challenges, things that were easier to coordinate as a couple. Now, when the kids are "with me" I have 100 percent of the transportation duties, 100 percent of the entertainment, and 100 percent of the feeding and handling. It's a lot. And when I'm in a bind, I can often ask for help from my ex. You can see how my friendliness and flexibility makes things easier for her. Well, when I'm in need that "friendship" is what keeps things balanced between us. When we were in the earlier months of divorce, it was much less easy to ask for anything. Today, we are still learning, and still making adjustments, but for the most part, we negotiate support for one another.

Support for our kids is support for our ex. There is no way around it. Anger towards our ex is anger that ends up in our kid's world. I can take that shit elsewhere, as I do when they are with me. It's no different. My anger is my own, and it is my responsibility to leave it elsewhere, and deal with it outside of my relationship to my kids, and even my ex. Yep, it sucks, but there it is.

Anger is energy. Learn to deal with it and channel it towards something you want. Any anger directed back at your ex is anger that will return to you ten-fold when you are in dire need of support. So a prayer. Our kids are a gift. My ex is blameless in her journey forward, and it is in my best interest to support her and the kids with everything I've got. And that's what I do.