Both art and giving birth deal with the act of creation, so maybe it's not a surprise that some pregnant ladies -- including Mariah Carey -- want to celebrate their nine months with child in an artistic manner.

And artists like Houston-based body painter Vonetta Berry find a round belly the perfect surface for certain types of artistic creations.

"The first belly I painted was my own," she told HuffPost Weird News. "My first instinct is that, since it's round, I should do something round. But I wanted to play with shades and make a flat surface design look by using shades."

Berry gets as much as $700 for her belly-busting works of art, each of which takes between three and five hours to create, depending on how elaborate a design is used.

"I get a lot of requests for flowers," she said. "Sometimes, a mother wants me to paint what they think the baby might look like. One woman showed me a picture of a gritty ultrasound photo and wanted me to reproduce it in color."

However, her favorite belly painting was from a woman who wanted her to paint a kitchen appliance on her tummy.

"The woman wanted an oven with a little bun inside," she laughed.

Many times, women have their bellies painted as part of a baby shower ritual. Other times, they are done for charity, such as a recent exhibition done on the bellies of 20 pregnant women by Danish art photographers Marie Wengler, Marte Holten and Karoline Tira Liberkind to raise funds for Maternity Worldwide, a charity that strives to save women's and children's lives during pregnancy and childbirth in Ethiopia.

Regardless of the reason, Vancouver-based body painter Allyson Grant says that painting a pregnant belly is an intimate experience for both the mother and the artist.

"I was amazed and in awe when I worked on my first belly –- a woman who was about seven and a half months pregnant," Grant said. "During the two hours I worked with her, the shape was slowly shifting. It was profound to be that aware of a new life inside of her."

As beautiful as that can be, Berry says dealing with the little nipper is the biggest challenge of belly painting.

"When it's moving constantly, it creates this odd point," Berry said. "You don't know if it's an elbow or knee sticking out. The kicks are like hiccups. You don't know what they're doing inside."

Although belly painting is an artistic way for a woman to say she's with child, it's not very permanent since the paints are washable.

For moms who want to have a memento to guilt their kids in the future, belly casting is a more permanent answer, according to Atlanta-based mom Tisha DeShields, who sells body casting kits that allow moms to immortalize their bulging tummies in plaster or fiberglass and either paint the forms themselves or have a professional artist do it.

Some women turn their stomachs into watermelons or strawberries and even ballerinas or butterflies -- but some do far more.

"One woman had her belly made to look like a lion," said DeShields, the ex-wife of former major league baseball player Delino DeShields. "Her breasts were the lion's eyes."

Because the belly casts are permanent, DeShields says they are used in unusual ways.

"One person turned her belly cast as a headstone over the place where she buried the baby's placenta," she said.

Although it makes to sense to do a belly painting or belly cast when the bulge is at its biggest, Berry recommends moms who want to give their belly to art do so in their eight month of pregnancy. ""You're full and round, but there's no distress," Berry explained.

Grant concurs and says she learned that lesson the hard way.

"One of my belly paintings was for a woman who was to give birth any day so I was a bit nervous about that one!" she laughed. "There was a lot of movement under the brush!" 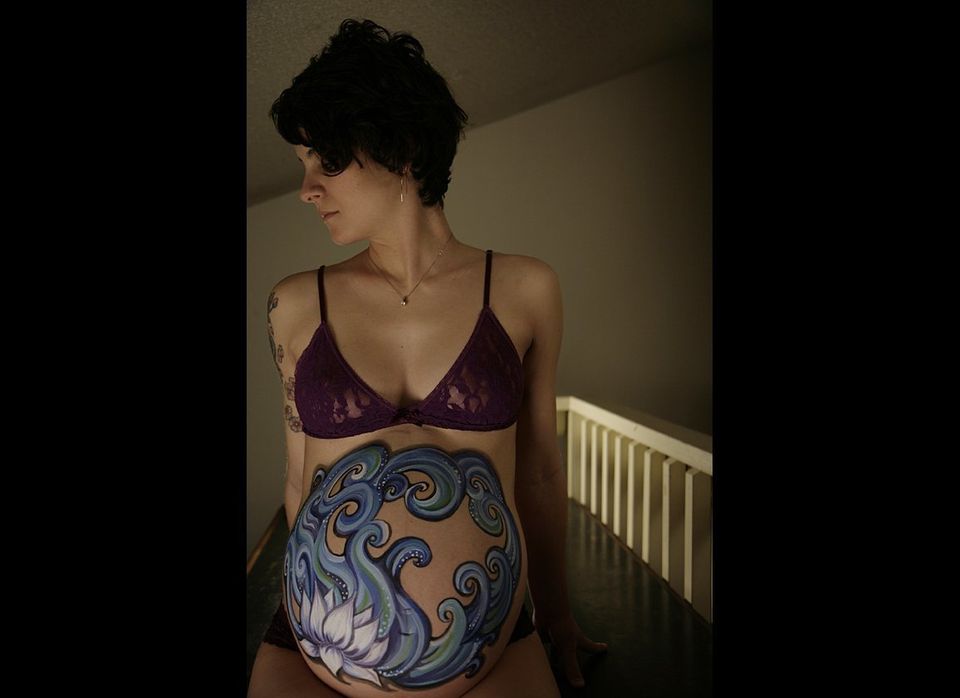 1 / 10
Pregnant Belly Art
Pregnancy only lasts nine months so some moms wish to immortalize it by turning their bulging bellies into art.
Photo by Yoshi Tanaka