I recently had the chance to spend some time with my nephew. Filled with enthusiasm, the three-year-old boy ran around the room playing with toy trucks and cars, until settling on the couch and asking me to read one of his favorite books. We poured over the pages of Dr. Seuss until he drifted off to sleep and after I tucked him in, I stood protectively and concerned over his small body, as thoughts of his future began to flood my mind.

You see, in just a year and a half, my nephew will enter preschool. Here, one would expect his love of learning to be fostered as he begins to read, learn basic math skills, and use his imagination but, my nephew's experience in preschool will not be so simple. Perhaps Miranda Rights should be added to the otherwise colorful curriculum. Why? Well, like any young Black boy in America, for my nephew, preschool may be the first step to a long, or short, journey to chains. Chains? Yes, despite Lincoln's abolition of slavery, the school-to-prison pipeline is a conduit for white supremacy, racism, and oppression beginning as early as preschool for young students of color.

The ACLU defines the prison pipeline as "the policies and practices that push our nation's schoolchildren, especially our most at-risk children, out of classrooms and into the juvenile and criminal justice systems." The intentional nature of these policies reveals the nasty beast of racism deeply rooted in our society. Even in preschools, disproportionate numbers of Black students receive out-of-school suspensions compared to their white counterparts.

Across the nation, according to data released in 2014, Black students make up 18 percent of children enrolled in preschools, and 48 percent of these kids experience more than one out-of-school suspension. White students make up 43 percent of enrollment but account for just 26 percent of students with more than one suspension. Discriminatory practices in school discipline continue to be skewed throughout elementary, middle, and high school with Black students being expelled or suspended at a rate of three to one, compared to white students.

In a single academic year, 1.2 million Black students are suspended nationally in public schools from grades K through 12. Nearly 55 percent of these suspensions took place in 13 southern states, and the districts within these states are responsible for 50 percent of expulsions for Black students across the U.S. While we see these disparities concentrated in the south, across the nation these numbers point to a need to address and examine the practices and policies that lead to unequal disciplinary action.

As we prepare for new administration it is an ideal time to consider how to rectify this injustice. Aggressive changes in policy are necessary to save the next generation of Black students and break down institutional structures that support white supremacy. This requires a new holistic educational curriculum and training for students, and more importantly, educators and administrators. A good place to start would be an accurate portrayal of history and Blackness. It would also require the removal of zero-tolerance policies that target Black and brown bodies.

How do we get there? All over the country students at institutions of higher education have protested the discriminatory practices that persist at their schools, in their classrooms, on their sports teams. University student activists answered numerous calls to action in response to the brutal killings of Black and brown bodies throughout the nation and we've begun to see high school students requiring demands and standards of their high schools. Change requires a disruption that may not be comfortable. With combined grassroots and grasstops efforts we can change the climate of academic institutions, so young Black boys, like my energetic, carefree, nephew can live free from chains. 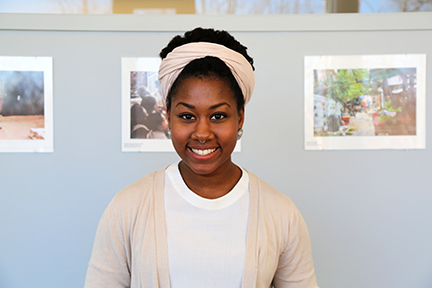 Shayna Jones is a Masters of Public Policy candidate at the Heller School with a concentration in Poverty Alleviation. She recognizes the need for decolonization of public schools and has an interest in education policy and community organizing for low-income communities of color. This piece was originally a component of the Social Policy Analysis course offered at the Heller School.